The frozen pizza brand famous for the slogan “No home delivery, it’s DiGiorno” is now starring in a massive recall or recall in the United States because it could cause allergies in some consumers, the newspaper reported New York Post Monday, September 27.

“FSIS is concerned that some product may be in consumers’ freezers,” ad the Food Safety and Inspection Service (FSIS) of the United States Department of Agriculture on Sunday. “Consumers who have purchased these products are urged not to consume them.”

The labeling error first came to light after a customer informed the Swiss snack giant that the boxes labeled pepperoni pizza actually contained three-meat pizzas, which contain allergenic textured soy protein. These mislabeled products were reportedly shipped to retail locations and distribution centers across the country.

Recall pizzas may contain an allergen for people

FSIS reported that the pizza products that are part of the recall were produced on June 30, 2021 with an expiration date of March 2022. They have the USDA mark of inspection label, bearing the establishment number “EST. 1682A, ”which is the code for Nation Pizza Products Limited, a subsidiary of Nestlé USA, the Post detailed.

When finding one of the frozen pizzas that are in the recall due to the incorrect labeling, customers are urged to throw the item away or return it to the place of purchase, the statement from the Food Safety and Inspection Service said.

Despite the recall of frozen pizzas, no illnesses have yet been confirmed

So far, fortunately, the agency has not confirmed any reports of allergic reactions in people after the consumption of some of the pizzas that star in the recall or mass recall in US stores.

Questions regarding pizza recalls should be addressed to Bonita Cleveland, Nestlé USA’s Consumer Services Manager, at 800-681-1676 or by email at [email protected], the New York Post said.

Recall of ready-to-eat salads due to labeling error

If you buy the product, you could be surprised in the ingredients. Authorities have ordered a recall or recall of ready-to-eat salads that were sold throughout the United States due to a labeling error.

According to the report issued by Kiro 7 On Thursday night, a company that makes ready-to-eat salads faces a recall in the domestic market after its packages of Ranch dressing actually contained Caesar dressing with anchovies.

They issue a recall of ready-to-eat salads 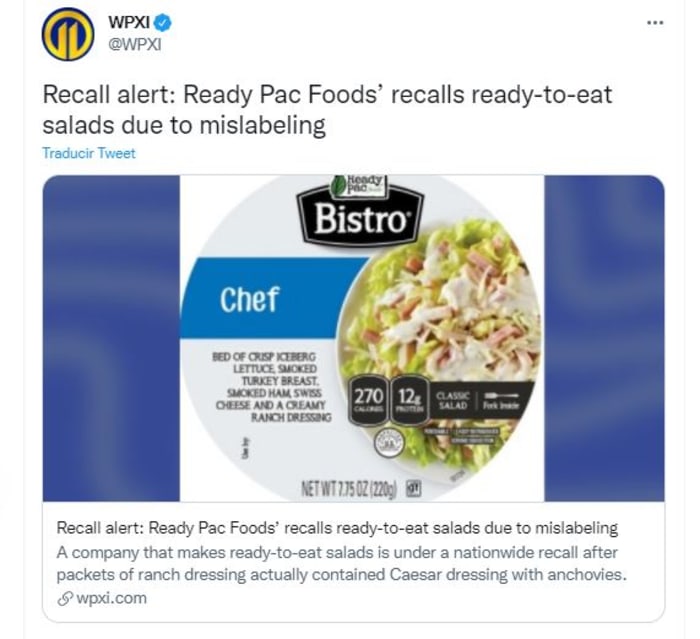 According to a release released on the night of Thursday, September 23, by the Food Safety and Inspection Service of the United States Department of Agriculture, Ready Pac Foods, Inc., with plants in Swedesboro, New Jersey, and Jackson, Georgia, are removing approximately 222,915 pounds of ready-to-eat salads that contain meat and poultry.

The problem was discovered when its salad dressing supplier notified Ready Pac that a shipment of Litehouse Ranch salad dressing was incorrectly labeled, the FDA explained in its statement.

There have been no confirmed reports of adverse reactions from consuming the wrong product, the agency noted. Products subject to recall may have the establishment number “M-18502B”, “P-18502B”, “M-32081” or “P-32081” printed on the packaging along with the expiration date.

They ask not to consume the salads affected by the recall 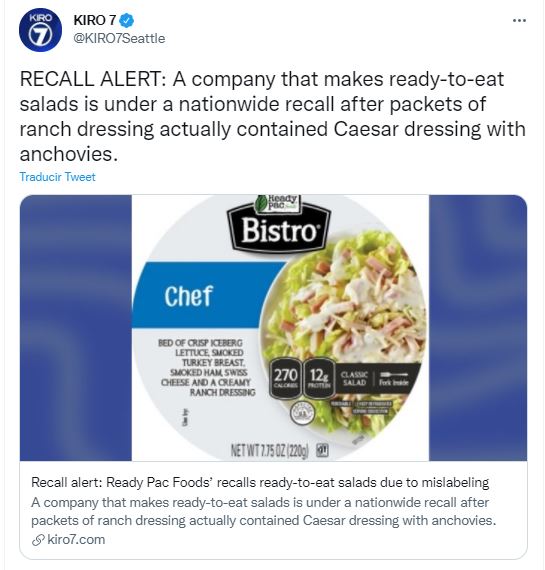 Consumers who have purchased these ready-to-eat salads are urged not to consume them, FDA authorities stated in their statement. These products must be discarded or returned to the place where they were purchased.

Trending on Canadian News  Amparo, evicted in the Gòtic from the apartment where she had spent her 74 years without any default

On the other hand, the Food and Drug Administration (FDA, in English) of the United States, the body that regulates the commercialization of drugs, authorized on Wednesday a third dose of the Pfizer vaccine for those over 65 and also for seniors of age at health risk or especially exposed to Covid-19, reported the news agency Eph.

This last group of people especially exposed to the coronavirus consists of health workers, teachers, caregivers, supermarket employees, homeless and deprived of liberty, according to the FDA. 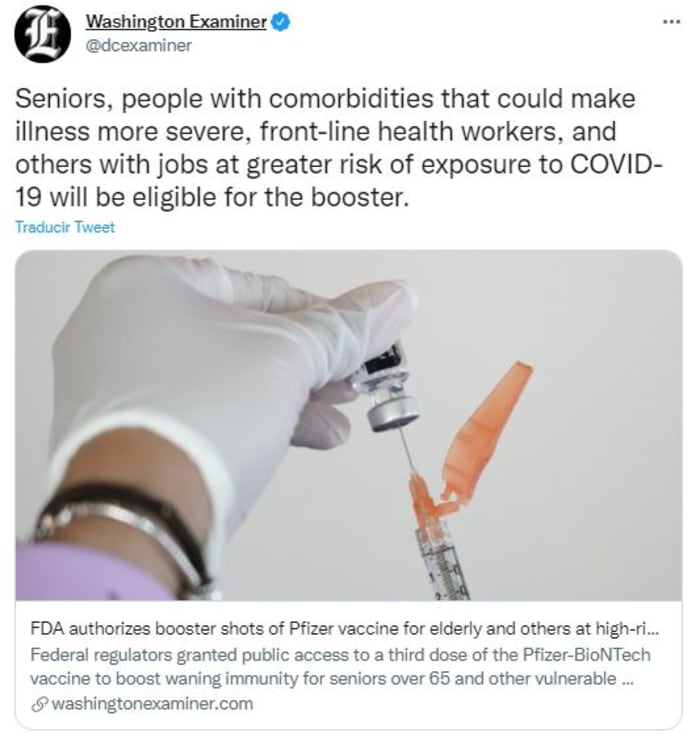 “Today’s decision demonstrates that the science and data currently available continue to guide the FDA’s decision-making for covid-19 vaccines during this pandemic,” agency director Janet Woodcock said in a statement.

Likewise, Janet Woodcock stated that as more information becomes available on the “safety and efficacy” of vaccines, including third doses such as the one now approved for a specific population, the FDA will “evaluate” that information.

The third dose will be applied only to specific groups

This FDA decision comes in the middle of the debate in the United States about the need to administer a third dose to its entire population and on a global scale about the suitability of doing so while other countries still do not have enough vaccines, explained Efe.

Authorization of the third dose for these groups of people also comes a week after it was recommended by an FDA advisory committee. The recommendation was made in a second vote after having previously rejected, with broad support, the plan of a third dose for the majority of the population, considering insufficient evidence to administer a third dose to everyone. For more information visit this note.