This time he was not saved. A pastor was beaten after a father realized how he was inappropriately touching his son at a bus stop in Oklahoma, in the midwestern United States. The event was recorded on video.

Fox News reported that a father in Oklahoma City subjected a local pastor after seeing him inappropriately touching his son at a bus stop. On the spot, the suspect was left with his head broken and bloody, as later appeared in the mugshot.

Pastor was beaten after inappropriately touching a child

“There are hardly any words that are appropriate to (say before) the camera,” witness Lisa Ward said of the incident in which a local pastor was severely beaten for groping a minor. “It’s just disgusting,” he added, according to the Fox News review.

Oklahoma City police arrested the suspect, identified as 33-year-old Michael Coghill, last Wednesday after a boy’s father confronted him after recording him on camera touching his 9-year-old son at a bus stop. bus indicated News9.

The boy told his parents and the police what was happening

However, due to the Open Records Act, the police department was unable to confirm to Fox News that the boy’s father was the one who confronted the suspect. But neighborhood residents did say that Coghill is a local pastor from that area.

The boy told police that Pastor Coghill used to jog near the bus stop and that he had stopped in that area on more than one occasion, according to the police report quoted by Fox News and News9 media last week. .

The pastor jogged, stopped to touch the boy, and then was beaten

According to local reports, the boy confessed that Coghill had gone to the bus stop on Monday and touched him in a way that made him feel uncomfortable. The little boy also told his parents about the incident that day, so the father decided to accompany him to the bus stop on Wednesday.

“He (pastor) knew what time (the boy) would be there every day. That was the hardest part, the most disgusting part, ”witness Lisa Ward told News9, also quoted in the report that Fox News published last Friday.

The boy’s father observed the incident

Then the victim’s father, at a distance, sat in his car and waited to see if Coghill would show up and touch the boy inappropriately. So it was. As the little boy made his way to the bus stop, Coghill stopped his jog and approached the boy, according to the police report.

“While looking at the school bus stop, our suspect ran past him, ran past the bus stop where the children were waiting. He turned around, came back and stopped to touch the boy, ”said Sgt. Dillon Quirk of the Oklahoma City Police Department.

The father recorded the event to give it to the police 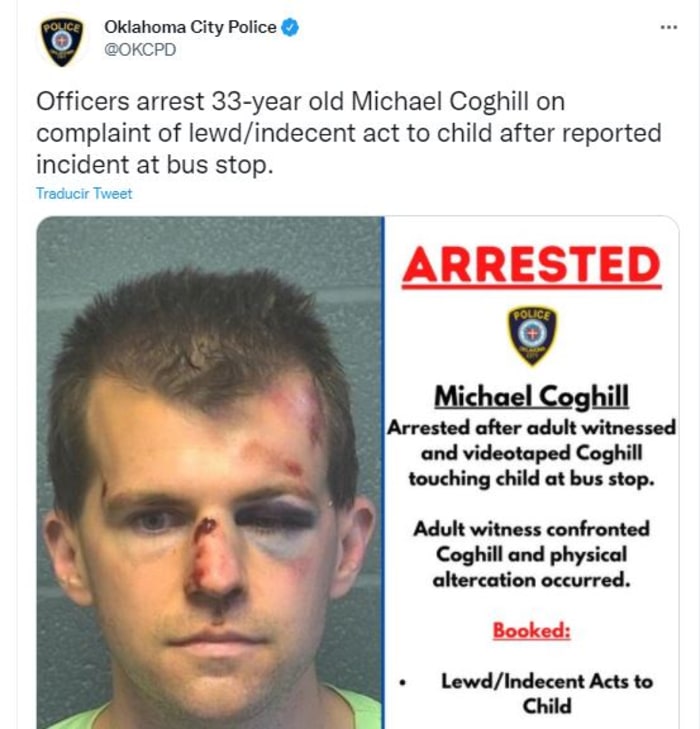 At the site, Pastor Coghill was observed to place his hand on the child’s side and then move it to the child’s back. The father recorded the incident, which was later turned over to the police, and proceeded to subdue Coghill.

Following the beating, Pastor Coghill’s skull was fractured and his orbital socket was also smashed on the left side of his face. “I was in the police car all bloody,” detailed witness Lisa Ward, according to the Fox News report.

Church spoke out after the pastor was beaten and arrested 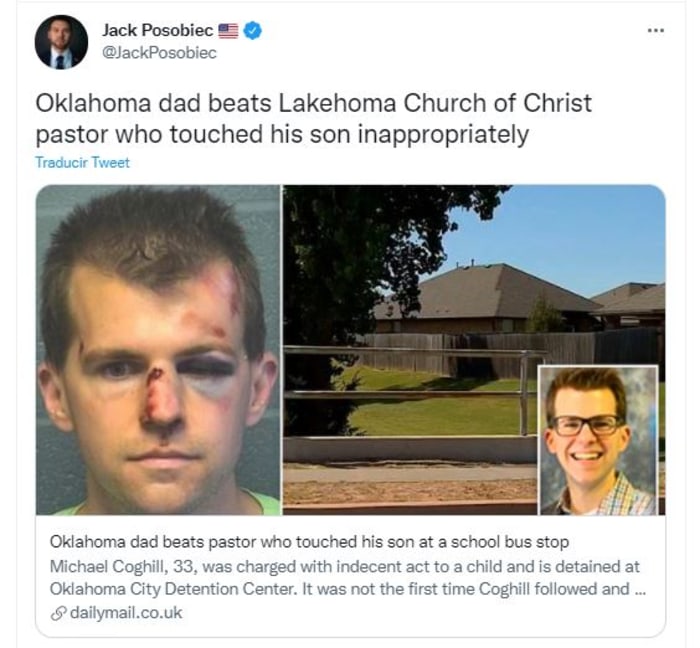 Coghill was later confirmed to be a pastor at Lakehoma Church of Christ, which issued a statement condemning the abuse: “It broke our hearts to learn of the incident involving one of our adult ministers, and our hearts go out to him. child and family involved ”.

According to News9, the statement added: “We were surprised by this news as (the pastor) had a clean verified record, and we have received no reports or complaints against him during his tenure. The Church leadership does not tolerate any form of abuse and will meet tonight to discuss next steps. We will cooperate with the authorities as necessary. ” At least as of Friday, after he was beaten, Pastor Coghill was under arrest at the Oklahoma County Detention Center on one count of lewd acts against a child.

He confessed his sin. A pastor identified as Christopher Robert Garcia appeared at a California law enforcement agency and admitted to having sex with an underage person, authorities reported to the media.

The newspaper Bakersfield Now He noted that the defendant, a Fresno resident pastor, was arrested in the town of Merced after police said that he himself confessed to having had sexual relations with a minor victim, without specifying the gender.

The disturbing confession of the pastor Christopher García

On September 1, a man came to the Merced Police Department to report illegal sexual conduct. Officers spoke to him and later identified him as 36-year-old Christopher Robert Garcia, the Bakersfield Now report detailed.

During questioning, Christopher Garcia told officers that he is a pastor who used to live in Merced, the county seat of the same name in California. Officers reported that he later confessed to having an inappropriate relationship with a minor.

Detectives were then called in to carry out an investigation, which later determined that Pastor Christopher Garcia started the relationship via social media in 2019 and knew the person was a minor.

Pastor Christopher García met with the victim on several occasions and it was indicated that he performed various sexual acts with the minor. Later, the priest was arrested and booked into the Merced County Jail.

They accused the pastor Christopher García for various sexual offenses

Following his confession and subsequent arrest, Merced police asked anyone with information about this incident or another related to the pastor to contact Detective Gorman at (209) 388-7715 or via email at gormana @ cityofmerced. org.