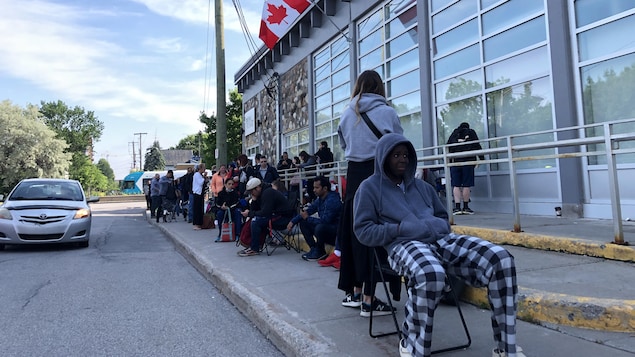 Wednesday morning, a long queue in which more than a hundred citizens were waiting had formed around the building that houses the office on Champlain Street.

The line stretched for tens of meters. Residents met on site by a Radio-Canada team said that they showed up at the scene in the early morning, before opening hours, to be sure to meet a representative.

I left at 3:30 a.m. I arrived at 6 a.m. to submit my passport applicationsaid Ida Sandes, a resident of Boucherville who preferred to drive to Gatineau, instead of going to Montreal.

There is less waiting here than in Montreal. There, it seems like it’s crazy, then they wouldn’t take our request until it was 48 hours in advance.

Geneviève Brassard, a Laval resident, arrived at 7 a.m. to pick up her passport and apply on behalf of her son.

My request was made on March 31 and I am still waiting for a response. So I came to see if I could get my passport back and do this for my son at the same time.she said.

In Laval, the situation is chaotic , relates Ms. Brassard, who is leaving on a trip on Thursday. She thought she had more luck and answers in Gatineau.

I think there is a huge lack of information. We are in nothingness she complains. We try to call for [ne pas engorger les files] and avoid too many people at the passport office, but we don’t have an answer. We then have no choice but to show up.

Citizens line up outside the Service Canada office to get their passports in Gatineau on Wednesday morning.

Coupons to the rescue?

The minister responsible for issuing passports, Karina Gould, said in various interviews on Tuesday that there would be a distribution of coupons to various Service Canada offices on Wednesday morning.

These coupons are supposed to assign an appointment time to their holders which, according to Minister Gould, will allow passport applicants to no longer have to stand outside in front of Service Canada offices.

In Gatineau, however, when Radio-Canada passed, there had still not been any distribution of coupons.

Karina Gould repeated, as she has done for several days, that hiring has been made at Service Canada, with the addition of 600 employees, but that this recruitment is not over. She said she shared Canadians’ frustration with the situation.

Some citizens lined up for hours before speaking to a Service Canada representative in Gatineau.

For his part, in the House of Commons, Prime Minister Justin Trudeau said the situation at passport offices was unacceptable and added that his government was trying to redirect additional resources to Service Canada from elsewhere in the the federal apparatus.

The Minister of National Revenue, Diane Lebouthillier, has also stated that her department has come in to help, resources having been loaned to help Passport Canada, but she recalled that during the current period, the personnel of her department must also deal with tax returns.

With information from Christian Milette and the Canadian Press