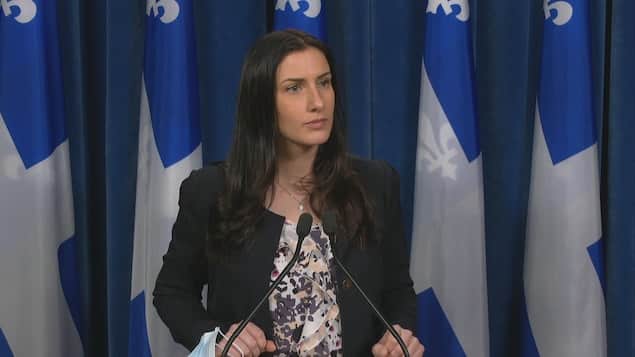 As she begins constituency activities for the summer season, the outgoing MP met the press on Thursday.

The last few months have been very, very busy, agrees the Gaspé. Asked about her track record, she replies without hesitation that her greatest source of pride remains the adoption of the law putting an end to the hydrocarbon sector on 12 April.

” The question of blocking oil projects, for me, was important. »

Everything starts from Gaspé in the hydrocarbon fileshe recalls, adding that it has been demonstrated, thanks to the mobilization of various local groups, that social acceptability was not there.

She also recalls that the Parti Québécois (PQ) had tabled a first bill to this effect.

Méganne Perry Mélancon, photographed at the start of her mandate.

Even though this issue has recently made headlines because of Utica Resources’ Superior Court petition, Ms. Perry Mélançon believes that parliamentarians have done everything to strengthen the law as much as possible to avoid lawsuits from companies.

” This is still a major step forward for Quebec. For me, this is one of the reasons why I do politics. [Parce que je veux] arrive with changes in society that will be beneficial for generations to come. »

The elected official also applauds the recent adoption of a housing bill, in particular to help tenants, inspired in her opinion by the bill she had previously tabled. This initiative will allow municipalities in Quebec to use the right of first refusal. We were very happy to see that the CAQ chose this avenuelaunches the deputy, who says that she has done everything possible to be considered.

Prime Minister François Legault pledged to offer the right of first refusal to municipal administrations during the official opening ceremony of the 2022 Assizes of the Union of Quebec Municipalities (UMQ), in May.

As the City of Montreal already does, other municipal administrations will be able to acquire properties as a priority, which could facilitate the implementation of solutions to counter the housing shortage. The law provides a mechanism to protect our social housing stock, which is excellent news, tooshe says.

Parti Québécois spokesperson for housing, Méganne Perry Mélançon also mentions having struggled on several fronts to find solutions for all Quebecers living the concrete consequences of the housing crisis.

According to Méganne Perry Mélançon, it is not necessary to have a constituency in power to advance political issues and obtain important announcements. For me, having an opposition that is strong, that is constructive, also has its advantages.pleads the deputy.

The fate of the elderly was also the subject heart stroke of the elected representative’s parliamentary session. The MNA presented alongside her leader, Paul St-Pierre Plamondon, the plan Live and age with dignityin addition to documenting the reality of seniors.

” We have a lot of seniors who call us at the office and who are in a bit of distress, financially, in terms of health care. »

The main interested party has also multiplied the interventions related to transport in her riding. As is the case for the elderly, however, she is of the opinion that the CAQ government of François Legault has not delivered the goods.

The Living and Aging with Dignity plan calls for a PQ government to invest $2.7 billion a year in home care for seniors.

We had high expectations which, unfortunately, have still not been met.she says.

In this regard, the member cites the postponement of the rehabilitation of the railway to Gaspé as well as the provincial plan for the regional airline industry, which according to her has proven to be a wet firecracker.

In his view, the government’s strategy contains very weak measurements which will not improve flight frequency or schedules.

The elected official argues that these two files will undoubtedly be part of her list of priorities if she is re-elected on October 3. Méganne Perry Mélançon will run for a second term.