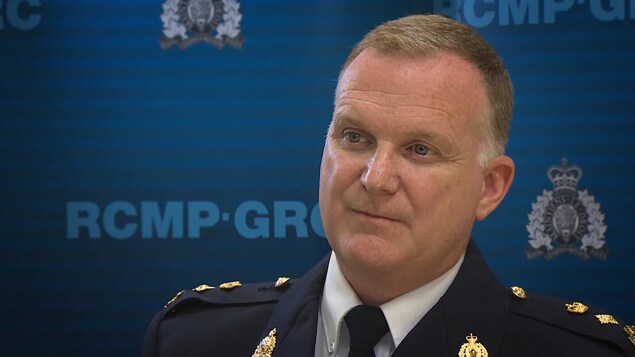 Within these four pages are allegations that the head of the RCMP promised politicians that the police force would release information on the firearms used in the killings.

The Mass Casualty Commission confirms that it has received 132 pages of notes from the Superintendent of RCMP, Darren Campbellin mid-February 2022, but the record made no reference to a meeting with Commissioner Brenda Lucki on April 28, 2020.

Three weeks ago, the investigation received a second file from the agent Darren Campbell. This time the file includes notes from a conference call between senior officers of the RCMP in Nova Scotia and the Commissioner Brenda Lucki.

We learn that the commissioner was not happy that commanders in Nova Scotia had not released information on the brands and models of firearms used in the attacks.

The superintendent, Darren Campbell believed that disclosing these details could harm the investigation to trace the origin of the shooter’s weapons.

We asked the RCMP why she had leaked two sets of notes and have not yet received a response.

This idea that the Commissioner Lucky made a commitment to Prime Minister Trudeau and the Minister of Public Safety at the time, Bill Blair, ahead of new gun control legislation, sparked a political storm in Ottawa this week. Opposition MPs are calling for an investigation into the possibility of political interference.

Bill Blair, President of the Queen’s Privy Council for Canada and Minister of Emergency Preparedness for the Government of Canada, answers a question in the House of Commons on June 22, 2022.

Bill Blair and Justin Trudeau say there was no interference and the RCMP makes its own decisions regarding the disclosure of information.

The commissioner Brenda Lucki denied interfering with a police investigation, but she is not commenting on allegations she wanted to release more information ahead of the Liberals’ plan to introduce a new gun control law.

Darren Campbell and Brenda Lucki are expected to be called as witnesses at the inquest at the end of next month. They were also summoned to appear before a parliamentary hearing in Ottawa in late July to respond to allegations of political interference.

Barbara McLeanthe commission’s director of investigations, demanded an explanation from the Justice Department about why four pages were missing from the initial disclosure.

Barbara McLean would like to understand why material was withheld when sent to the Commission.

She would also like an explanation for any other material that was withheld.

The commission is seeking assurances that nothing else has been withheld in accordance with the instructions of the subpoenasshe says.

The commission said it first requested all the records of the RCMP related to the investigation of the April 2020 massacre through a subpoena on June 15, 2021.

In response, she received thousands of pages of documents and files on an ongoing basis.

These documents were often provided in a disjointed manner, which required extensive review by the commission team.Explain Barbara McLean.

Members of the Mass Casualty Commission have not yet spoken to the RCMP Superintendent, Darren Campbell about his allegations.

But the officer Campbell says he’s looking forward to testifying at the Commission hearings and won’t say anything until it’s his turn.

It would be inappropriate for me to make public comments before testifying under oath.he said.

He was the main spokesperson for the RCMP of Nova Scotia at three major press conferences held after the killings. He also met many of the families of the victims.

Rob Pineo is an attorney at Patterson Law representing the families of 14 shooting victims and others affected by the tragedy.

Rob Pineo, an attorney representing the families of 14 people killed in the shooting says the difference in Officer Campbell’s notes is worrying, but certainly not surprising given the way information has been disseminated during this investigation.

We feel that the timeline, the goals that were set for this investigation, did not allow enough time for the information and evidence to be properly verified and disclosed.said the lawyer.

Going through thousands of pages of documents was a monumental taskeven for a big team like ours, admits Rob Pineo.

The commission said in its interim report that by the end of March it had issued 70 subpoenas, including several to the RCMPfor documents and for witnesses.

With information fromElizabeth McMillan of CBC