When Allan Smith and Chanda Woodworth got evicted from their rent-subsidized apartment, it began a long journey of living in hotels and eventually on the street before settling into a new tiny home community.

The journey there wasn’t easy.

“Our blankets and pillows would get wet,” she said in an interview Saturday.

“I would do laundry and take my clothes back to the tent, and it would rain and everything was soaked. It was just very rough for us and it actually came to a point for us where I didn’t think Al was even going to make it. He was just not eating you know, we were so hungry.”

Both said there were nights when they didn’t know if they would even wake up the next day.

Then the news came they got a tiny home in the 12 Neighbors Community, created by businessman Marcel LeBrun. His not-for-profit 12 Neighbors Inc. plans to build a community of tiny homes on a 24-hectare plot of land on Fredericton’s north side.

The 12 Neighbors Community will feature a total of 96 tiny houses with 12 on each block. Each 23-square-meter home has a full kitchen, three-piece bathroom, living space and loft storage.

A full-fledged neighborhood, the community will have plenty of green and mixed-use space. It will also have a social enterprise center with a cafe.

The organization worked with the Fredericton City Council to obtain approvals for the lot and the building permits. It is partially subsidized by the Fredericton co-ordinated access system, which is managed by Social Development and other housing agencies and non-profits in the city.

The Government of Canada contributed $1.4 million in the form of a forgivable loan to the project through the Affordable Rental Housing Program. It also provided rent supplements to each of the new housing units for the first phase.

Renters do not pay more than 30 per cent of their total household income in rent. 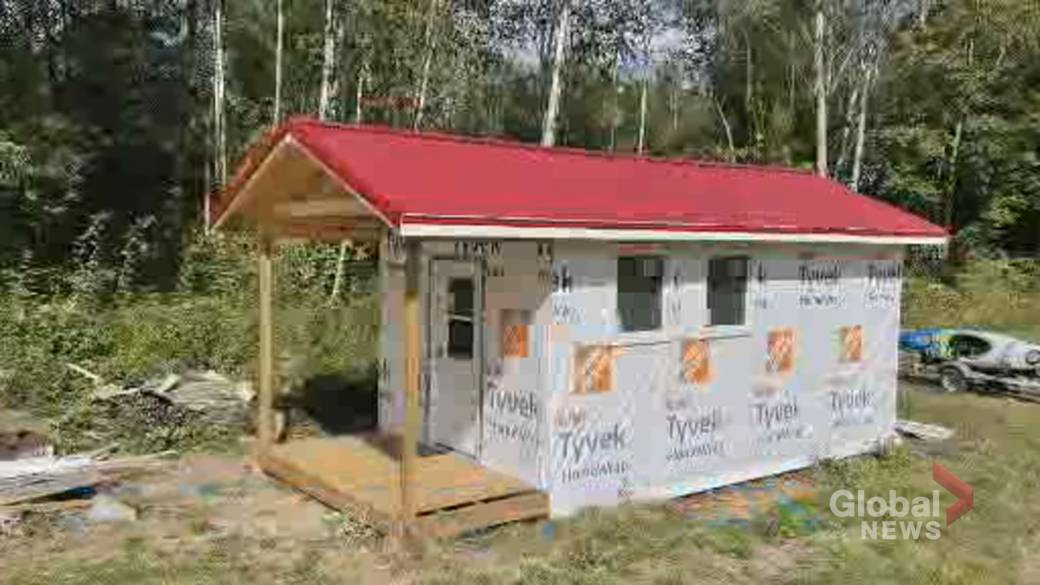 For Smith and Woodworth, it was something they never thought would happen. They applied and were successful.

“For days I was awake at night. All I could think about was this can’t be real. We’ve been here two nights and I’ve slept great both nights,” said Woodworth, who is from Fredericton.

They secured one of the tiny houses, which has a full kitchen, a couch that extends out into a bed, a full bathroom with a shower and a table that folds up against the wall.

High house costs have some Canadians considering tiny homes, but not all cities on board

For them, it’s a permanent place to call home.

Smith said it is particularly special because no one can take it back, as occurred with his former apartment.

He said his favorite part is the warm shower. For both, it’s nice to have a place to lay their heads at night that isn’t on the ground.

LeBrun said it’s about creating housing but also helping people with having a sustainable and affordable place to live.

“When people don’t have a roof over their heads, it’s really difficult to work on anything else in your life because all you can do is just focus on survival,” he said in an interview on Saturday.

“So, we want to help people in our community. (The) first thing we had to do was provide a house. Housing is really just the beginning.”

LeBrun said that will also help people get access to resources and training for jobs in retail, food service and construction.

So far, four houses have been set up with three of them occupied and the fourth soon to be occupied. It’s all part of the process, according to LeBrun, which will continue.

LeBrun said while things are just getting started there will be plenty of opportunity for people and business to get involved.

As for Smith and Woodworth, they say a place to call home is worth more than anything.