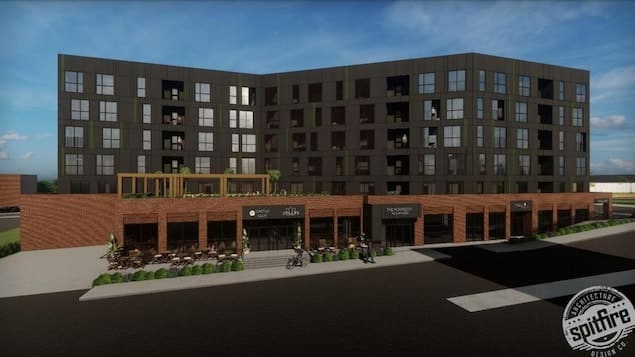 The land in the downtown Robinson Street parking lot will be converted to one building with underground parking, first-floor commercial spaces and 84 residential units ranging in size from 450 to 800 square feet.

Less expensive for tenants, these small apartments would be an asset for the city, according to the promoter of Galco Atlantic Investments Stephen Gallant.

Moncton is booming, downtown especially, it’s the bombhe said. In our opinion, smaller residential units are trending over larger ones right now because of their affordability.

It was in 2017 that the exchange of land took place between Galco Atlantic Investments and the City of Moncton.

The land in downtown Moncton acquired by developer Galco Atlantic Investments in 2017.

Photo: Courtesy of: City of Moncton

In 2011, about fifty demonstrators had camped on the land adjacent to the Château Bel Age to prevent the company from cutting trees there.

The exchange of land from the City of Moncton, six years later, was for the purpose of making this space a future park.

The Municipality paid $222,990 to Galco Atlantic Investments in order to obtain a grassed area near the old Château Bel Age.

The agreement initially stipulated that the company had to build a building worth $7.5 million in five years, failing which, the city would buy the land. Moncton council ultimately decided to grant a delay until early 2023.

Galco Atlantic Investments asked Wednesday evening during a meeting with the advisory planning committee for the derogation of eight municipal regulations. They have all been approved.

Among other things, the reduction of entrances to the building facing the railway line and the limitation of the number of individual terraces. A common space was instead proposed.

In addition, the planning advisory committee asked questions about the possible repercussions on traffic that the changes made to this parking lot could have.

Maxime Gauvin, a member of the committee, also asked if the repercussions of the construction on the Capitol Theater.

This property has a loading dock near the construction site. In addition, a city-owned parking space behind the Capitol Theater will be converted to a one-way street and 22 parking spaces.

Director of Engineering and City Development Rene Legacy clarified that these 22 parking spaces belong to the city, but will be reserved for Capitol Theater patrons during their major events.

The committee was also informed that pay stations will be removed and street lines painted this year. Underground service, curbs and sidewalks will see more extensive work in 2024.

A City of Moncton planner, Sarah anderson, said he was positive about the establishment of commercial spaces on the floor of the building. This will attract even more pedestrians, she says.

The committee was also curious to know if the housing would be affordable. The price of unit rentals has not yet been determined by Galco Atlantic Investments.

Planning Advisory Committee approval expires in 36 months if the developer does not receive it.

Galco Atlantic Investments wishes to start work as soon as possible, so that the project is ready in 2024.

With information from Shane Magee of CBC