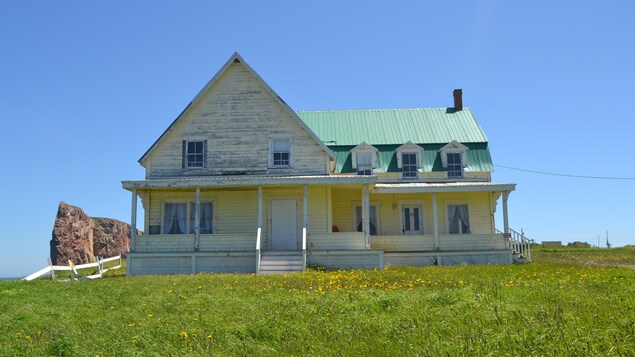 The general and artistic director of Les Percéides, François Cormier, deplores having been presented with a fait accompli by Laval University, which has just put the house up for sale.

According to them, this heritage house should be preserved for the same reasons that led Quebec to designate its near neighbour, the Frédérick-James villa, Gaspésie blue space .

The two organizations have repeatedly rented the house to house artists and filmmakers or for their training needs.

If it were transferred to organizations with a cultural vocation, access to the Biard house made it possible to properly accommodate artists and to pursue in a certain way the mandate that Université Laval had given itself, believes François Cormier.

This is, according to him, an important issue for organizations in a context of scarcity of housing in Gaspésie. I receive, he says, a lot of calls from organizations looking for accommodation for artists and it is very difficult to find, adds the director. It is absolutely necessary that we have infrastructures to welcome artists.

The organizations are therefore asking for a moratorium on the sale in order to have time to discuss the vocation of the house with the Ministry of Culture and possible partners. Otherwise, François Cormier fears an overbidding for the sale of the house. We can’t get it he fears.

He says he has discussed with the Ministry of Culture, which says it is ready to help.

However, the Ministry will not file an application to acquire the house.

Questioned by Radio-Canada, the Office of the Minister of Culture indicated that the law does not allow the Minister to interfere in a private real estate transaction by imposing a moratorium to prevent a sale.

We are asking Laval University to give us the house, just as they gave the Frederick-James villa to the government. We could be the main manager and share this house with all the other organizations and cultural needs that exist.

It is an end of inadmissibility, reports the general and artistic director of Percéides.

For its part, the management of Université Laval has indicated in a press release that it ensures the responsible management of its real estate and financial assets, for the benefit of its teaching and research mission.

The University recalls that from 2016 to 2020, it attempted various relaunches of activities at the Frederick-James villa.

Although discussions took place and brainstorming sessions were carried out with community partners, spokesperson Simon La Terror indicated, no project was about to materialize, in particular due to the absence specific funding or subsidy for this purpose.

The Frédérick-James villa, which overlooks the city of Percé, was ceded by the University to the Quebec government.

The University says it is happy to have transferred the Frederick-James villa to the Government of Quebec, which will be able to preserve the building and make it available to the population. She also argues that the Maison Biard remains in the heritage site of Percé and that a purchaser must respect the related terms, particularly in terms of preservation and consideration of the landscape.

The Biard house, located on the shore of Anse-du-Nord in Percé, was built in 1901. The building, which is part of the heritage site of Percé, belonged to John Le Marquand and his associate Charles Biard, both salt-dried cod traders.