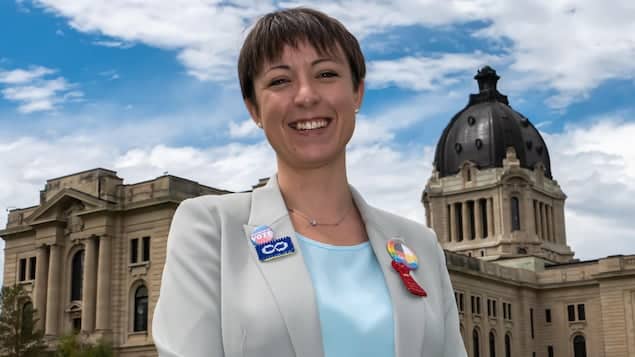 Being Métis, she also wants to bring transparency to the issues of Indigenous peoples in the province.

An activist for climate justice and addictions

Kaitlyn Harvey was born and raised in Prince Albert and currently lives in Saskatoon.

She holds a BA in Geography from the University of Saskatchewan. The lawyer also has a master’s degree in law, with a specialization in environmental justice and human rights.

” I wanted to understand how to use the law to protect people. »

During her university career, Kaitlyn Harvey studied conflict resolution, mediation and litigation. It was during her classes that she leaned towards politics.

It’s time to act. We cannot put off difficult discussions and decisions and wait for the next generation, the next Prime Minister to do somethingshe said.

The single mother is also vice-president of the Saskatchewan Métis and Aboriginal New Democrats.

Kaitlyn Harvey has therefore launched her candidacy for the 2020 election in the riding of Saskatoon-Willowgrove. But she did not win the seat in this riding close to the Saskatchewan Party.

The death of her cousin, from an overdose in a Prince Albert penitentiary, served as the trigger and motivated her to run for the leadership of the New Democratic Party of Saskatchewan.

” I’ve lost family members to things that could have been prevented, like drug overdoses, suicide, and gang violence. »

The first Métis woman to run for chieftainship wants to overhaul the political structures that Indigenous peoples face.

Kaitlyn Harvey announced her intention to run for the seat in the riding of Saskatoon-Meewasin.

The opportunities Indigenous people have and don’t have, compared to non-Indigenous people and the challenges our families face are not addressed and taken seriously by politicianssays Kaitlyn Harvey.

What solidified his choice to present himself in the race for the leadership of the NDP, this is his opponent’s platform. According to Ms. Harvey, the current party does not prioritize climate change enough.

I wasn’t ready… but we’re never ready for something like this when it’s just now or never. It’s the same with climate change, it’s now or never.

If she becomes leader of the party, her challenge will be to bring people together in the caucus of the NDP and gain their trust.

I hope people will understand that it’s nothing personal, we just get down to businessshe says.

Kaitlyn Harvey’s campaign is focused on climate change and justice for those suffering from addictions.

The candidate’s agenda is centered on transparency within the party. She wants to renew the strategy of NDP to make it more efficient. Ms Harvey hopes this will encourage more voters to vote in the 2024 poll.

People want honesty and concrete ideas on how we should move forwardexplains the candidate.

Kaitlyn Harvey intends to run for the seat of MP in the riding of Saskatoon-Meewasin. Ryan Meili has held this seat since 2017 for the NDP.

A more radical approach according to an expert

While her values ​​are more progressive and she presents clear policies, he believes that this signal does not arouse much enthusiasm among voters.

” She has a mountain to climb to assert herself in this race. »

Mr. Kenny believes, however, that the new leader needs to propose a new direction for the party.

More traditional voters want continuity, but it’s been 10 years and the New Democrats’ success is minimal. It’s time to take other directions and dare a littlehe explained.

In order to win the next election and win more seats, the NDP must reconsider its priorities, he added.