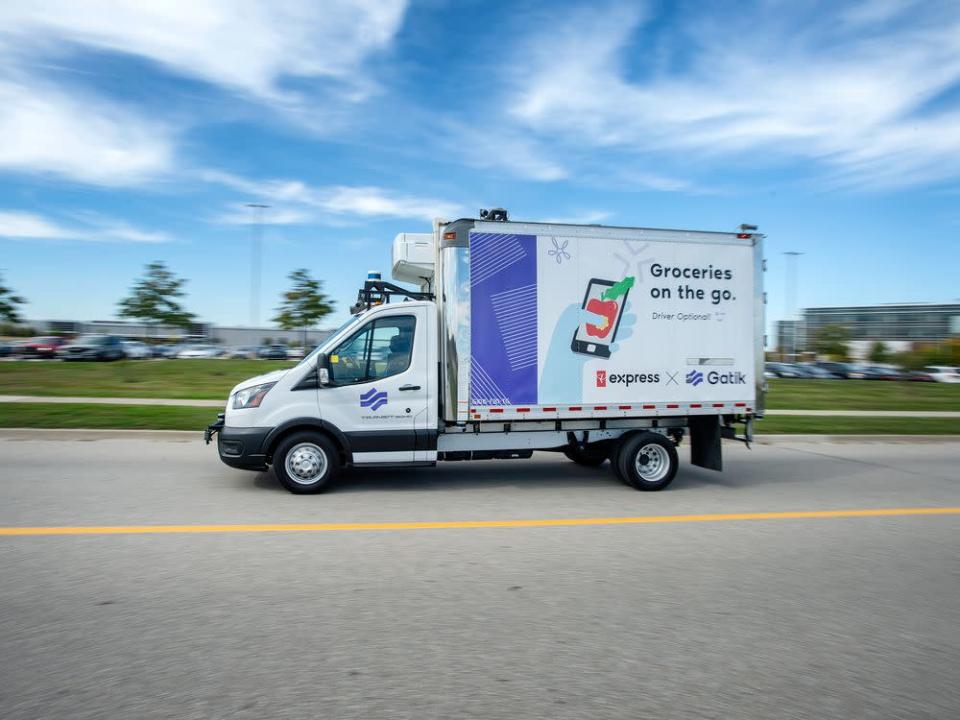 A purple-and-white truck left a suburban supermarket on a Wednesday night in August and drove seven kilometres to the headquarters of Loblaw Cos. Ltd. in Brampton, Ont., just west of Toronto. It was a historic trip, according to the grocery chain, because no one was in the driver’s seat for the first time.

For about two-and-a-half years, Loblaw has been working with Gatik Inc., an autonomous technology company based in Silicon Valley, to run a fleet of five driverless trucks guided by cameras, laser sensors and sonar.

In that time, the trucks have completed 150,000 trips without safety issues or accidents, picking up online grocery orders at a fulfilment centre and dropping them off for customers at a handful of pickup points around the Toronto area.

But until that night in August, the trucks always had a human in the driver’s seat who could take control of the vehicle at any point.

Now, all five trucks are driving around Toronto, 12 hours a day, with an empty driver’s seat, which Loblaw said is a first for autonomous commercial delivery vehicles in Canada.

The hope is that by next year, the trucks will run without any humans in them at all, making Loblaw’s e-commerce deliveries more efficient and less reliant on a tightening labour pool. There were 28,210 truck-driving job vacancies in the second quarter, up more than 50 per cent year over year, according to the latest Statistics Canada report.

But for the next few months, the trucks will still run with a safety driver in the passenger seat as a precaution, next to a red, tangerine-sized button known as the emergency stop, or the “kill button.”

“They wanted someone to interact with, just in case the vehicle got pulled over,” he said.

But the trucks have speakers for that, so Gatik’s staff can communicate remotely with police or other drivers if there’s an accident. It’s not legally required to have a person in the truck in Ontario, since the provincial government is running a pilot program that allows for certain autonomous vehicles to run without a driver.

Gatik is also running trucks for Walmart Inc. in Arkansas without anyone in the vehicle at all.

Removing the driver is the holy grail in our industry

“The big news here is that we’re able to do commercial deliveries literally without the need for a driver,” Narang said. “Removing the driver is the holy grail in our industry.”

Gatik charges Loblaw an annual fee, based on the number of trucks and usage per hour. Narang wouldn’t divulge the price tag, but said he believes the autonomous trucks will end up being 30 per cent cheaper than regular trucks within five years.

The new fleet is focused on what’s known as the middle mile in logistics: transporting online orders from a fulfilment centre to stores and pickup locations, as opposed to long-haul trips transporting products from a manufacturer to Loblaw’s larger distribution warehouses, or the so-called last mile, delivering to homes.

Loblaw and Gatik picked the middle mile because the routes are short and predictable, so the trucks can drive the same roads over and over, collecting data on traffic patterns and weather that can help guide future trips.

David Markwell, Loblaw’s chief technology and analytics officer, said the main benefit of autonomous trucks is they can run more frequent trips, 24 hours straight if necessary, without having to stop so the driver can take a break.

“The goal is that it will be cheaper when the driver comes fully out,” he said. “It’s not necessarily a labour elimination opportunity as much as it is being able to run higher-frequency deliveries.”

Loblaw is planning to keep someone in the trucks until at least “some point next year,” Markwell said. The trucks bear the Loblaw logo, and the grocery chain wants to be certain the trucks don’t get into any trouble.

“It’s definitely a reputational concern,” he said. “We want to make sure that we’re comfortable.”