Milan Lucic has never been one to shy away from a little fun. When he got teased about wearing a cowboy hat that was too big for his head, he went one better, buying a black villain’s cowboy hat. It went perfect with his western suit, giving Lucic the look of someone you wouldn’t want to spill a drink on on a Saturday night visit to the saloon.

“I thought I might as well, you know if I’m going to throw on the cowboy hat on,” the veteran forward said.

“I might as well add to It with the bolo tie and all of that kind of stuff. Just having some fun. You know what’s the point if you can’t have some fun?

“It’s a fun league,” he added. “We’ve had a lot of fun winning this year and I just wanted to add to it.”

His teammates gave him the thumbs up for the outfit. Forward Brett Ritchie who is a big fan of Yellowstone says Lucic reminded him of one of the characters.

“I wouldn’t want to mess with him. He looked like one of those guys off of Yellowstone. Rip maybe.” 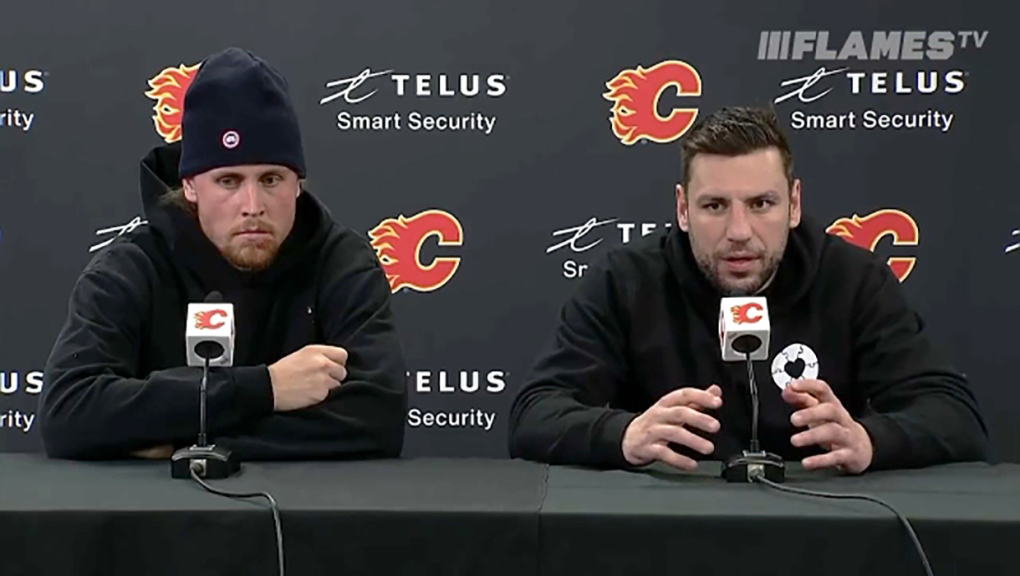 Forward Brett Ritchie who is a big fan of Yellowstone says Lucic reminded him of one of the characters. “I wouldn’t want to mess with him. He looked like one of those guys off of Yellowstone. Rip maybe.”

SUTTER NOT SO SURE

Darryl Sutter, who is a cattle rancher in Viking, Alta. when he’s not one of the NHL’s top coaches he says he did n’t see the look until he got home and was watching TV

The old cowboy, who spent some time winning a pair of Stanley Cups in Hollywood coaching the Kings, wasn’t sure about Lucic’s lid.

“He’s got to get a work cowboy hat. Not a parade hat,” he laughed.

One thing Sutter wasn’t complaining about was the fourth lines work ethic on Saturday night. Lucic, Ritchie and Trevor Lewis gave the Flames the spark they needed against the Canucks.

Ritchie scored 14 seconds after the Canucks had tied it at 2-2. It was just Ritchie’s third goal of the season but he knows his line from him is there for more than just offense.

“You want to try and be miserable to play against,” said Ritchie.

“That’s I think the sign of a good team,” he added. “You know down the lineup, those lower lines and even the third defense pairing you want to be hard to play against and unpredictable and be able to count on us shift in and shift out.”

READY FOR THE PREDATORS

The Flame are on the road for three games to close out the regular season and then it’s back home for the playoffs.

The first game on the trip is Tuesday night against the Nashville Predators, a team the Flames very well could face in the opening round of the playoffs.

Lucic is hoping his line can again provide a spark and says they won’t be taking the foot off the gas pedal.

“We definitely can’t take that game lightly because we know it’s a big game for them. So we’ve got to go into that game with the same sort of mentality,” Lucic said.

“You know because if you play laid back or you play relaxed and comfortable that’s when guys tend to get hurt and that’s when bad things tend to happen.”