While the legal right to an abortion in British Columbia isn’t in peril, experts say there are persistent problems when it comes to accessing it in the province.

With the US seemingly possessed to overturn Roe v. Wade, BC politicians sounded off in the legislature, decrying the move stateside and vowing to protect access to abortion.

Nicole Pasquino, clinical director with Options for Sexual Health, says the fact that abortion is legal and covered by the province’s medical service plan doesn’t mean it’s actually accessible to everyone who needs it. There are a range of geographic, financial and logistical barriers someone seeking care may encounter. Further, Pasquino says women who are already marginalized are more likely to face these barriers.

“Equitable access is like the key component of care and we definitely don’t have equitable access,” she says. “If you look at the groups that are often the ones that are most impacted by access, its vulnerable groups.”

Those groups include at-risk youth, those living in rural and remote communities, women with precarious immigration status, those who don’t speak English, women in abusive relationships, the LGBTQ+ community, Indigenous and racialized women, women who are poor and those with disabilities.

Dr. Sarah Munro, a professor of obstetrics and gynecology at the University of British Columbia, also says a number of things constrain the actual availability of abortion for someone who is trying to access one.

“Is it physically something that someone can get to? Is it culturally appropriate and safe? Is it affordable with the out-of-pocket costs of traveling? Those are all things that can get in the way of access,” she says.

The first challenge is finding a provider. Options for Sexual Health maintains a publicly available list on its website. There are a total of 10 clinics listed. Among these, the types of abortion offered and the point in pregnancy at which it is available varies.

“Finding where that abortion is accessible is also a task which also gets passed on to the patient,” Pasquino notes. “And that’s unfortunate.”

There are no providers listed in the Fraser Health region, which is the province’s most populous. Northern Health — which at 600,000 square kilometers is BC’s largest, and which has the highest proportion of Indigenous people living within its boundaries — has one, and none for anyone who is more than 10 weeks pregnant.

The four clinics listed in the city of Vancouver all have the following note: “This clinic has very busy phone lines. Please call at a time when you can wait on hold for an hour or more.”

However, Pasquino says the list does not include every provider.

“What we do know is that there are definitely other providers that are not listed on our website but for lots of reasons they choose not to have their listing public,” she explains.

“The reason is because there is still a lot of moral, religious and violent views around abortion in Canada. So often these providers have fear around being outed … There’s a lot of moral and religious barriers in our province, and that’s specifically why we don ‘t see a lot of providers in the Fraser Health area because it is actively an area where there are lots of anti-choice organizations and lots of anti-choice attitudes.”

Pasquino notes that unless someone hears about a community-based provider through word of mouth, or calls the organization to get information on additional providers that it keeps confidential, this list is the most comprehensive one that a woman trying to find out where to get an abortion in BC will find if she’s searching online, and that’s assuming she has access to a safe, reliable internet connection. 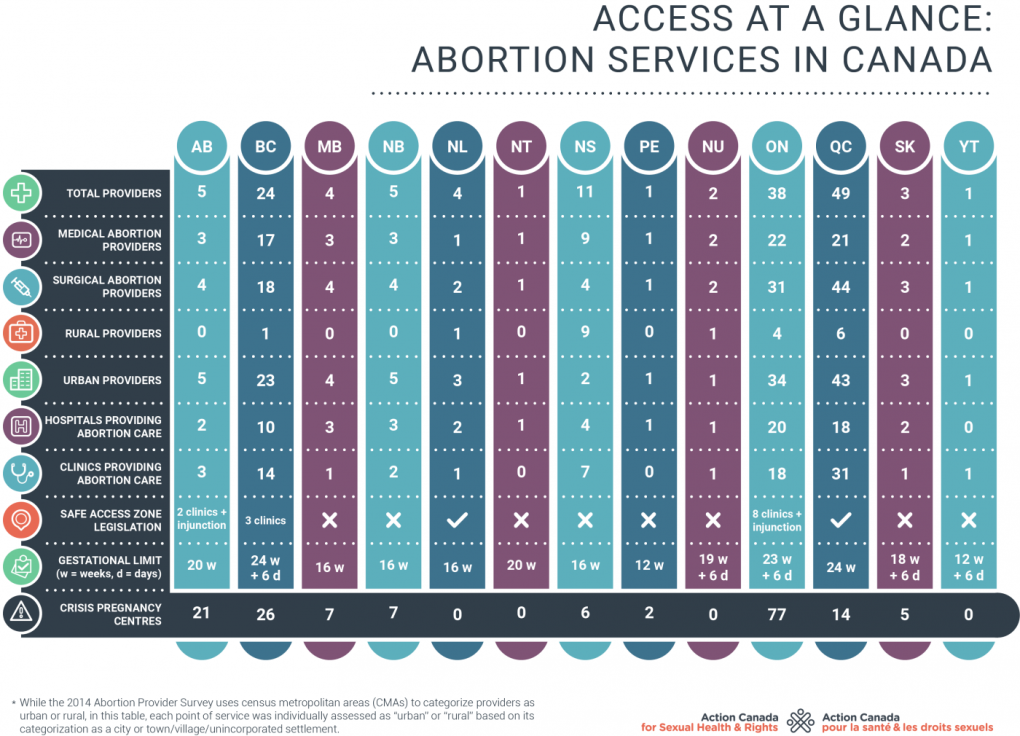 “Crisis pregnancy centers are agencies that present themselves as unbiased medical clinics or counseling centers, but they’re not medical facilities for people looking for abortion and contraception,” Munro explains.

There are locations in cities like Surrey, Prince George, Courtenay or Kamloops where there are no publicly-listed providers.

Pasquino says although these centers present themselves as somewhere to go to talk through all available options when faced with an unwanted or unexpected pregnancy, what they provide is something else entirely.

“They generally will never refer a client for an abortion or contraception. Often they provide extreme misinformation with the purpose of trying to actively stop someone from having an abortion. And there’s many, many of them,” she says.

“Unfortunately, if you’re a vulnerable person who’s trying to make a decision and you come across something that looks to be supportive, why wouldn’t you trust them?”

She also says it’s important to remember that reproductive health clinics that provide abortions never present it as the only option, and never try to influence a patient’s decision.

“We give them all the options. We’ll lay them out for them. Often they know what they want, but having the options laid out in a supportive, non-judgmental way really empowers them to make that decision.”

Pasquino also adds that it is important to keep in mind just how common of a medical procedure abortion is. One-in-three women in Canada will have an abortion in her lifetime. In 2020, 11,934 abortions were performed in hospitals or clinics in BC That’s an average of roughly 33 each day.

Finding a provider is one thing, but both Pasquino and Munro point out that figuring out how to get there presents a whole other host of barriers.

While the services provided at an appointment are covered by the province for anyone with a Care Card, the scarcity of dedicated clinics means many have to travel. Because the province is so vast and providers relatively scarce and spread out, the journey can range from a trip on local transit, to an hours-long drive back and forth, to a multi-day journey.

“The days off work aren’t covered, child care isn’t covered, the expense of getting to where you need to be. All of those types of things are hidden financial costs,” Pasquino says.

The burden of these costs is not equally distributed, Munro notes.

“It is certainly disproportionately felt by people who are lower income or who live in rural areas,” Munro says.

“Geographic access can be urban as well. In the Greater Vancouver and Fraser Valley areas, people still have to physically travel to get in-person care.”

They both also note that there are people in this province who will decide to end a pregnancy who are not covered by the medical services plan. For those people, the out-of-pocket cost for an abortion is between $500 and $700. Migrant workers, anyone with precarious immigration status, or anyone who is waiting to become eligible for coverage has to find a way to cover this cost.

Trying to sort out when, how and where to access an abortion also takes time. And the further along a pregnancy is, the fewer options for an abortion there are.

Munro says medical abortion in British Columbia is more widely available than ever before, which represents significant progress when it comes to expanding access.

Medical abortion is one of two types that is legal in Canada. It involves taking two pills on two separate days. The first ends the pregnancy and the second prompts the body to push out the contents of the uterus. It is an option within the first 10 weeks of pregnancy.

In 2017, Canada eliminate a number of restrictions on access to medical abortion using Mifegymiso, often referred to as “the abortion pill.”

Now in BC any primary care provider can prescribe it; it can be dispensed by pharmacists and taken at home. The cost is covered.

Munro says abortion is something more and more primary care providers are starting to incorporate into their scope of practice.

“We’re still in the early stages but we already have seen a rapid shift in the proportion of abortion provided medically,” Munro says.

The expansion of telephone or virtual visits during the COVID-19 pandemic also prompted a sharp increase in the percentage of providers who prescribe Mifegymiso without an in-person visit, according to her research.

“Before the pandemic only 16 per cent of our sample was reported offering medical abortions by telemedicine. During the pandemic, that rate shot up to 89 per cent,” she explained.

This, Munro says, opens up access to people even if they don’t have a family doctor or aren’t able to access primary care in their own community because it eliminates the need to go to an in-person appointment. In addition to primary care providers, several specialized clinics in Vancouver offer this service to those who live in other parts of the province.

An aspiration or “surgical” abortion is performed by a physician at a clinic or in a hospital. Suction is used to remove the contents of the uterus. It requires one in-person appointment and is available up to 24 weeks of pregnancy, although it is more complicated and there are fewer providers after the first trimester.

Pasquino says there are some reasons why this is something people choose, even if they are within the timeline for a medical abortion.

“While medication abortion has opened up the doors to have it more accessible in smaller communities it is certainly not a catchall for everybody,” she says.

Still, even with the issues and barriers that persist in British Columbia and beyond, Pasquino and Munro both say living in a country where abortion is legal and covered by provincial health care plans should not be taken for granted.

“If we take away safe abortion, then what happens is we have unsafe abortion. In the 60s, we had entire wards of women who were being admitted — 30 women a day — who were in sepsis from unsafe abortions. And they were dying,” Pasquino says.

If you need information about where to access reproductive health care in BC or have questions about contraception and abortion information is available online or by calling the Sex Sense Hotline at 1-800-739-7367 throughout BC* or 604-731-7803 in the Lower Mainland.