BRANDON, FLA.—Even as the Maple Leafs feel good about themselves — halfway to the required four victories for a first-round win — coach Sheldon Keefe continues to tinker with his lineup.

Alex Kerfoot practiced on the front line Saturday, with Auston Matthews and Mitch Marner, while Michael Bunting was dropped to the fourth after the coach didn’t like what he saw from his top line in Game 3, a 5-2 Leafs win.

Bunting is a popular player, but the post-season is no time to play favourites, or to wait for a guy to grow into his game. The 26-year-old rookie had a terrific regular-season campaign, but Keefe seemed to think Bunting has struggled coming back from an injury that held him out the final three games of the regular season and the first game of the playoffs.

“It’s coming back from an injury,” Keefe said, “and then you’re also playing in the playoffs for the first time. And especially when you’re going to play on that line … (those are) not easy minutes. So I thought that line had a hard time (Friday) night.”

The Lightning weren’t particularly good early in Game 3, but most of their chances at even strength were delivered when the Matthews line was on the ice against Alex Killorn, Anthony Cirelli and Brayden Point. Those are three quick, skilled hard-nosed players. Bunting was out of his element from him.

Once Kerfoot was put on the line in the third period, the chances leveled off.

“Kerfoot is a very competitive guy,” Keefe said. “He’s very responsible. He’s very good in all areas of his game. That translates really well to this time of year. His details of him, his habits of him, are good and those do not change.

“He made a bit of a mistake in the second period on the penalty kill. And that doesn’t change who he is. We give him an opportunity to move up in the lineup after that and he does a good job. It seems like whatever line he’s on improves.”

The Leafs are as healthy as they have been in recent post-seasons, and their depth us the reason why they’re up two games to one and feeling good in a series against the two-time defending Stanley Cup champions. Nine different players have scored for the Leafs, and they managed to win Friday without any goals from Matthews, Marner, William Nylander and John Tavares.

“As a group, we take pride in our depth,” said defenseman Morgan Rielly, one of Friday’s goal-scorers. “That’s been important to us all year. So with guys like Blacky (Colin Blackwell) and Kamper (David Kämpf) scoring big goals, that’s important. If we expect to play for any length of time, we’re going to need more of that, get more guys to step up and take that responsibility. 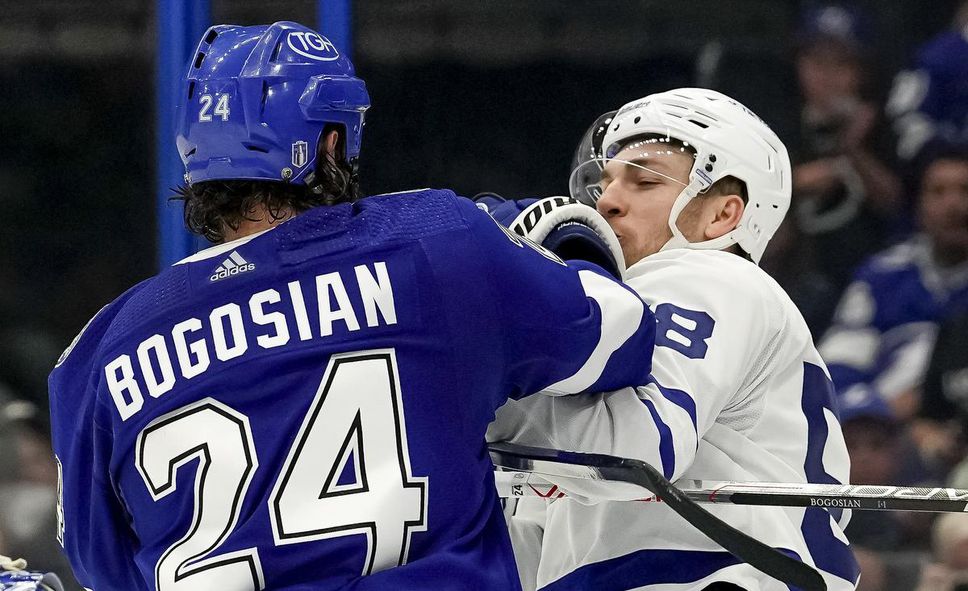 As Keefe looked for ways to get better, the Lightning looked for ways to turn the series around. Forward Nikita Kucherov and goalie Andrei Vasilevskiy did not practice Saturday, though both are expected to be ready for Sunday’s Game 4. No Lightning player has more than a single goal in the series, and their top line has combined for two — one each from Ondrej Palat and Kucherov. Captain Steven Stamkos has a single assist. Tampa’s top unit, collectively, is minus-10.

Lightning coach Jon Cooper was quite unhappy that his team took five minors in Game 3, saying Friday that “the parade to the penalty box is getting exhausting.”

His mood hadn’t changed much on Saturday. “We can’t spend 10 of the first 40 minutes in the penalty box. That doesn’t help you,” Cooper. said “We have a recipe. We have a plan. We’ve been in these situations before plenty of times in the last couple of years. Is it a guarantee we’re going to win tomorrow? Do not.”

It sounded like Cooper was trying to get into Jack Campbell’s head when he said “goal scoring against these guys, that’s not a worry.”

That’s part and parcel of the playoffs. But the message to his own players was to cut down the number of chances the Leafs are getting on Vasilevskiy.

“I just have a ton of faith in a veteran group here, so I expect to bounce back,” Cooper said. “I can’t sit here and guarantee what’s going to happen, but we will bounce back.”

If the Lightning are relying on their years of playoff experiences to help them, the Leafs are fighting the ghosts of their playoff experiences. They were up three games to one in the opening round against Montreal last year and still found a way to lose in seven.

The scar tissue, though, may have helped them.

“You try to draw from experiences you’ve had in the past and grow and learn,” Rielly said. “I don’t think we’ve accomplished anything yet. Obviously, we’ve still got a long way to go. But I like where we’re at as a group. We’re focused. We’re not getting too far ahead of ourselves, and it’s important that we keep on track.”