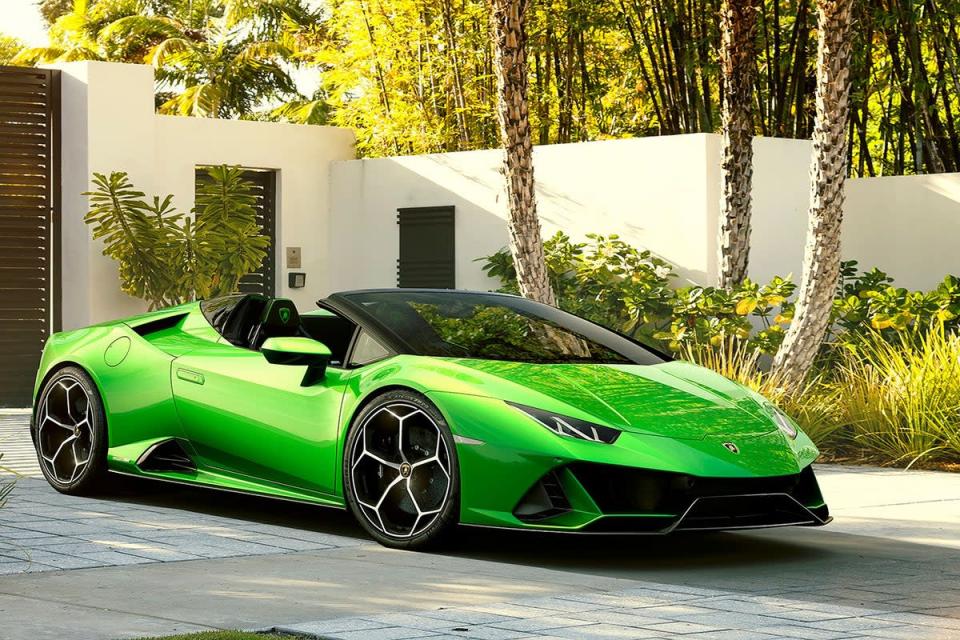 Unpopular as Kwasi Kwarteng may be, the nation’s supercar dealers must love him. Imagine, for example, that you’re one of those well-paid bankers in the City who’ve done rather well for themselves out of the “mini-Budget” and its hideous handouts to the rich. If you’re on £1m then the tax cuts alone will net you a handy £50,000 in a year. If you’ve had a good few deals in the gilts market, or selling sterling short (no one said traders in sovereign debt have to be grateful), you can look forward to a bumper bonus, now that Kwasi helpfully lifted the cap to make you work that little bit harder at your socially useless job. So let’s say that computes to an extra year-end lump sum of £178,971.

That makes £228,971 on benefits cuts and extra debt laid on the backs of future taxpayers. And with that you can buy a tastefully specced Lamborghini Huracan Evo Spyder. And by that I mean matt yellow paintwork with yellow brake callipers visible through the massive 20in forged alloy wheels and seats garnished with yellow (because yellow is my favourite colour, and makes any car look friendly and nice. Bright but less vulgar, I like to think).

I ought to do a little translation first. Lamborghini is the famous Italian marque founded only in 1961 (young by their standards) by a guy who made tractors, and nowadays owned by VW Group. They made the most stunning car of all time, the Murcielago, back in the 1960s, as well as the Countach, every schoolboy’s poster car in the 1980s, so can do no wrong. The company, by the way, led by the personable and personally stylish Stephan Winkelmann, is doing extremely well, post-pandemic. They’ve lost sales in Russia, for obvious reasons, but otherwise, bolstered by their Urus SUV, they say they made about half a billion pounds in profit in the first half of this year. They’ve also got orders covering the whole of their production for next year. So you’d better hurry up with that order…

“Huracan” is Spanish for hurricane, and was the name given to a top fighting bull in the 1870s; traditionally, all of the Lamborghini models are named after bovine champions, consonant with their raging bull logo. “Evo” means that it’s an evolution, or facelift for a model that’s been around since 2014. So these days it’s got a nice touchscreen and satnav. And Spyder is what the Italians call convertibles, for reasons lost in time.

Now, obviously you’re going to enjoy driving the thing because that is what it’s there for. It’s smaller than the recently finished full-sized Aventador, which makes it all the more wieldy on narrow country lanes, say, and, for what it’s worth, practical. It shares a lot of its componentry with its sister model, the Audi R8, because they’re all part of the VW Group, and if you’ve a sharp eye you can see some similarities and other less obvious bits, which is obviously a good thing because they should prove as durable as when they’re fitted to a Golf. So it shouldn’t let you down, and I found my test model to be flawless in service. I especially liked the way you can slightly raise the height of the nose to avoid fouling it on speed bumps – your bottom really is quite close to nature.

On the road… all I can say is that it’s the kind of car you don’t really want to get out of. I’d move in, if I could afford it. With just the two seats, with a thin veneer of alcantara, you’re not going to get a good night’s sleep in there, but then again time spent sleeping is wasted when you have this shark-like predator at your disposal. Not in an aggressive way, I mean, because the car has nothing to prove, and when you’re in it, neither do you. You, the bond trader, have just wrecked the British economy and almost wiped £1 trillion off the value of people’s pension pots, after all, which is perversely impressive, I suppose.

So you can just sit behind the Formula One-style carbon fibre steering wheel and make the most of the breathtaking performance, pushing the car only as far as is safe for you and other road users, quite content in the knowledge that it will top 200mph and accelerate about as fast as the laws of physics and your neck muscles will allow. The Spyder is the best of the Huracan variants for the obvious reason that the sensory overload is that much more, and your balding pate gets a bit of a tan. I speak for myself, of course.

It’s perfectly poised, not uncomfortable in the sense that it hurts, but it’s best if you’re short. You’re here for the ride. To look at the road disappear behind you, to feel the forces of nature as a bend is taken with elan, and most of all to hear the symphonic engine tone from just behind your ears, the mid-engine making for perfect weight distribution, that is just sublime. It’s very easy to drive because everything – steering, brakes, motor – is balanced and progressive, and there’s enough modern electronic gadgetry, not least the Quattro-style four wheel drive system, to ensure there are no surprises, or at least unwelcome ones. I’ve been in some of the Huracan’s competitors, Ferraris and McLarens, and in the right, professional, hands these machines may be superior. But a car like this is more like fine tailoring, and you wear it as much as use it. Besides, the people who tend to own these sorts of cars can have a Ferrari and a Lamborghini and a Porsche and a Bentley, if they want, and frequently do. It’s not an either/or in this sector of the market.

At the bottom of that near square steering wheel framed by its “paddle” gear levers, either side, is a button that you use to select the drive style. There are three settings. Strada is your softer more comfy road setting for pootling around; Sport is your vanilla setting for a run-out; Corsa will unleash all hell. It’s like turning the volume up to 11/10ths, Spinal Tap-style, and will send you to the horizon like that probe Nasa threw at an asteroid. It’s equipped with all the brute power of a Range Rover, say, but thanks to the light aluminium and carbon fibre construction, only weighs as much as a Fiesta.

But the most unexpected thing about driving a Huracan with the roof down around the city is how many friends you can make. You’re never alone in a Lamborghini, you see, and you just get people at traffic lights and junctions sidling up and saying “nice car” and the like; endless thumbs-up and selfies. I’m sorry to say that when one young chap, who looked like a student, asked me what I did for a living I told him I was a journalist, which I fear may have sent him on a career path on false pretences. I still worry about that.

The surprise, then, isn’t what a Huracan does for you: rather, it’s the magnetic, magical effect it has on those around you. They ought to be filled with envy but they see this spectacular, handsome machine and their hearts melt. If I was in a position to do so, I’d advise Kwasi Kwarteng to go out and get his hands on a Huracan Spyder asap, and then people would love him, even if he had Liz Truss sat beside him, ready to navigate the pair of them off a cliff. That’s what I call a supercar.