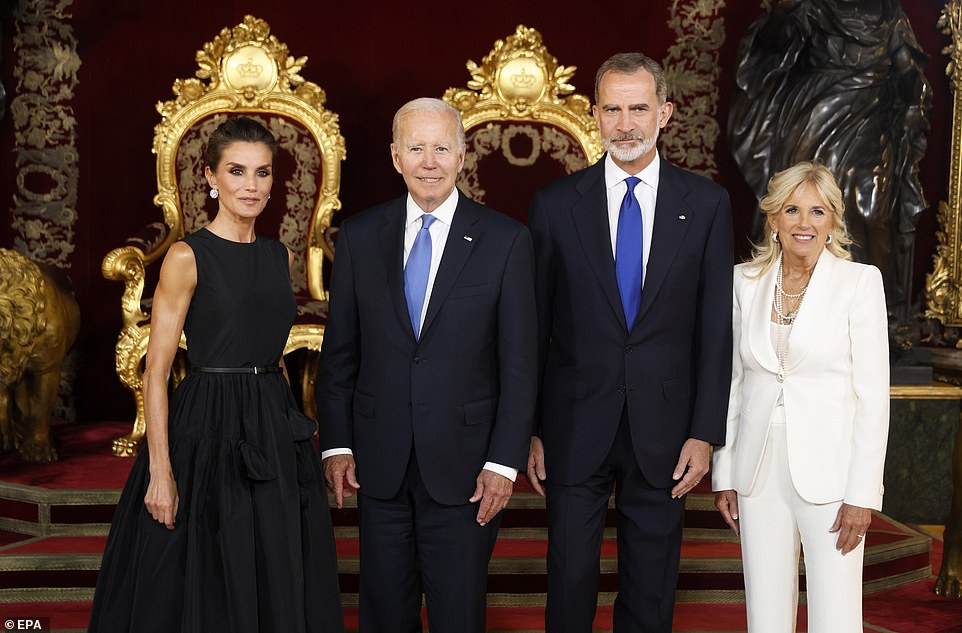 President Joe Biden joked with Spanish King Felipe VI at a lavish dinner at Madrid’s royal palace on Tuesday night as Jill Biden admitted he was worried she and Queen Letizia would clash in their outfits.

Biden cracked one of his favorite jokes as the royals welcomed them to the largest royal palace in use in Europe. The ornate granite building is 135,000 square meters in area and contains 3,418 rooms.

“We both married way above our positions,” Biden joked with the King and Queen after he and Jill greeted the royal couple, who were waiting in the throne room. He is one of the president’s favorite jokes and he uses it regularly.

Jill Biden, who was wearing a white pantsuit, admitted she had other concerns, namely that her outfit would clash with the style of Spanish royalty.

Jill shook his hand warmly and laughed. She told the president: ‘She was wearing a white suit today. I said, “Oh no, are you wearing that tonight?”

The two women spent the first part of Tuesday visiting Ukrainian refugees resettled in Spain. Letizia wore a white pantsuit during that visit. 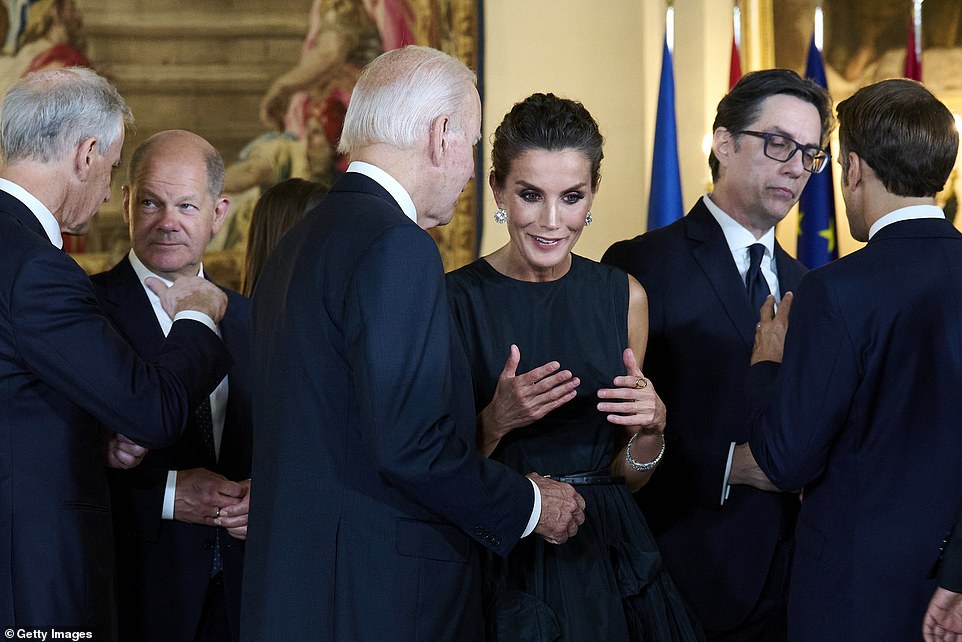 Queen Letizia told President Joe Biden how she had met two of her granddaughters earlier that day. 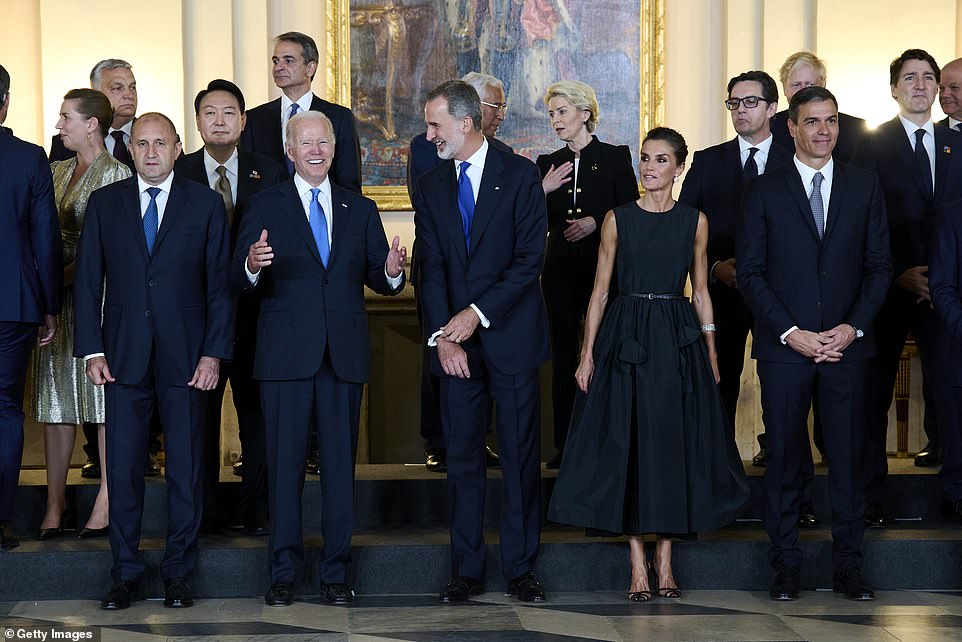 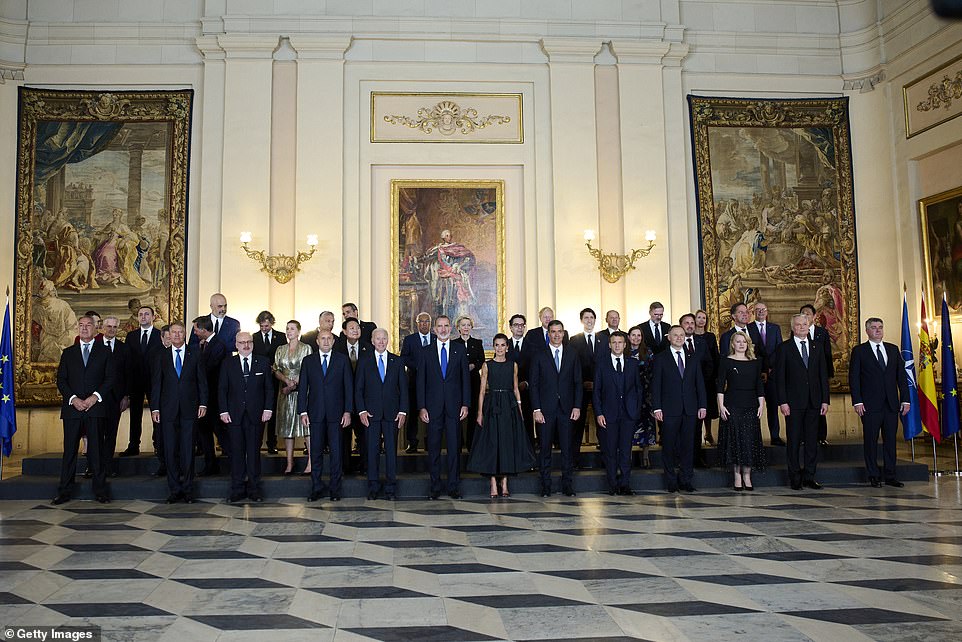 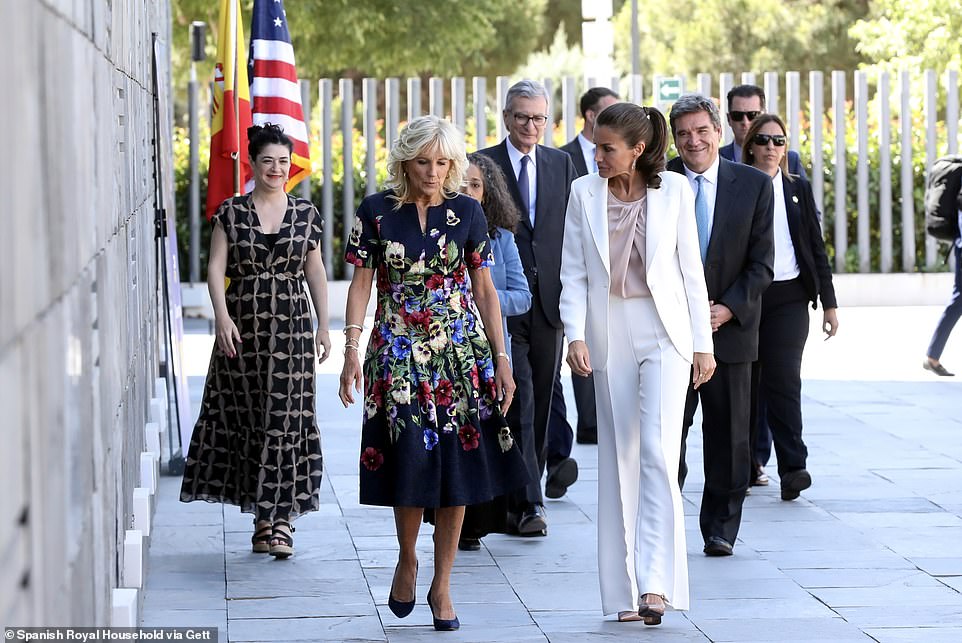 Jill Biden was concerned that her outfit would clash with that of Queen Letizia, who wore a white pantsuit at an event attended by the two women on Tuesday. 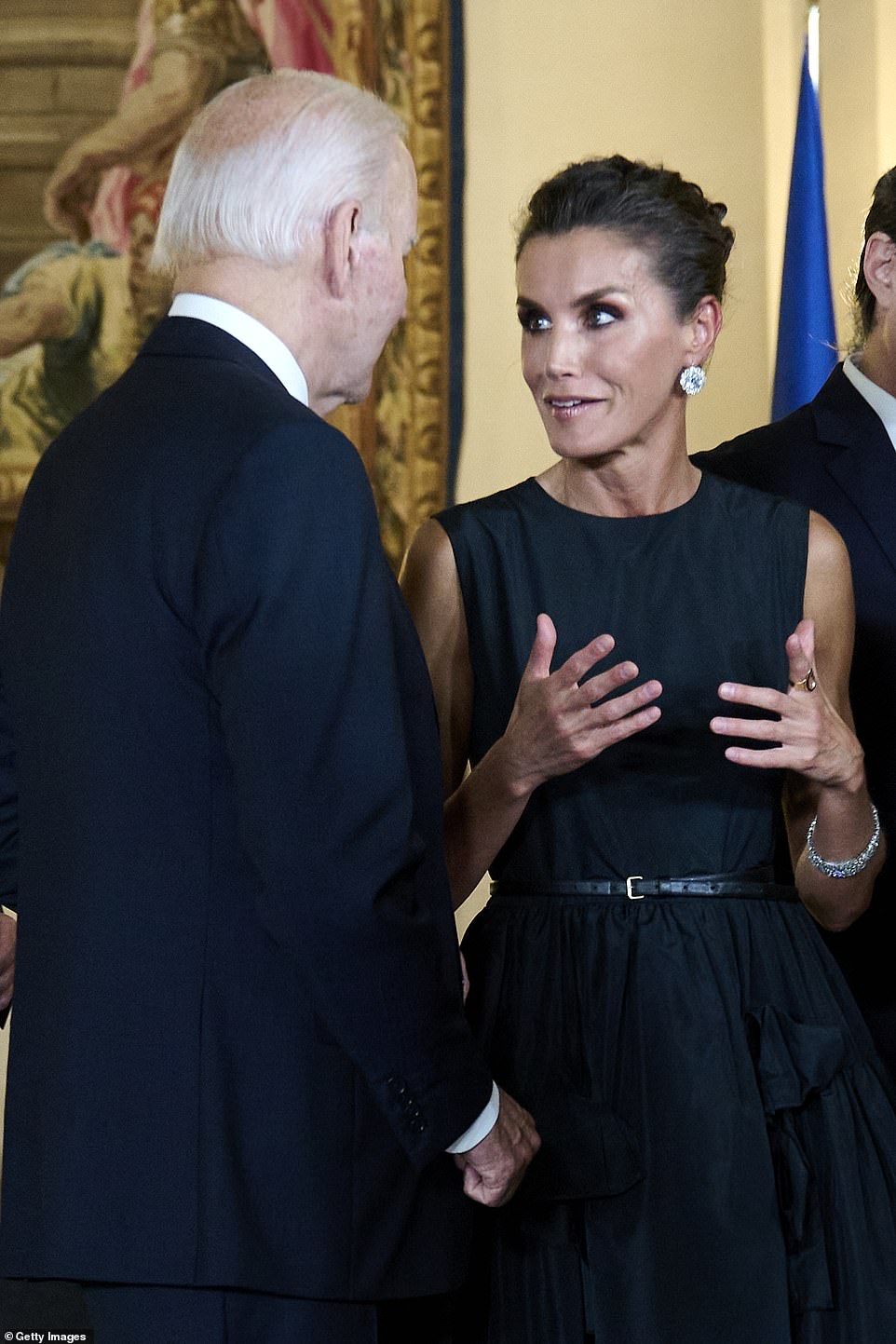 The Spanish royals welcomed NATO leaders to their home for a formal dinner to kick off the NATO alliance. 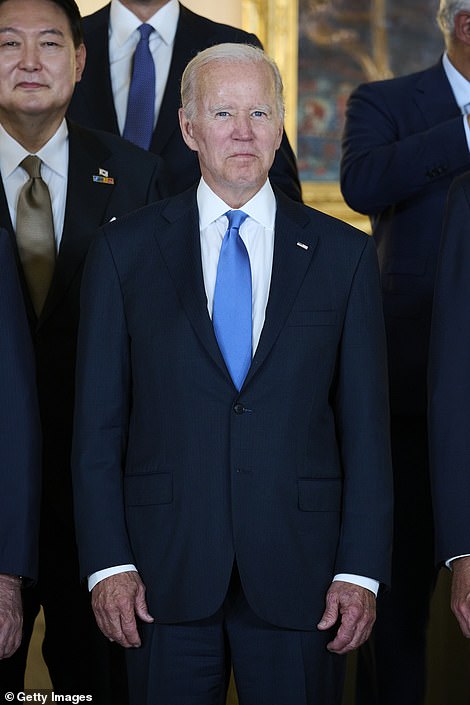 The leaders had to climb a long granite staircase to reach the reception. The Bidens held hands as they walked up the stairs.

Dinner took place at a long table in the ornate dining room, which has huge chandeliers hanging from the painted ceiling. Tapestries hang on the walls.

Biden was jovial throughout the event, joking with the king and repeatedly patting him on the arm.

The leaders also posed for a large family photo with the king and queen in a grand hall where Biden spoke with Queen Letizia afterward.

To begin the evening, King Felipe and Queen Letizia received each of the leaders at the palace and posed for a photo with them.

After they posed with the Bidens, President Biden joked with Letizia: ‘You only have to stand for two more hours. God loves you.

She laughed and told him how she had met her granddaughters Maisy and Finnegan earlier that day.

Jill Biden had introduced the girls to Letizia during her visit to a Ukrainian refugee center.

The Queen gave Maisy and Finnegan Biden warm hugs and chats with them before the event.

Jill Biden, 71, and Queen Letizia, 49, visited several families of Ukrainian refugees who were welcomed by Spain on Tuesday afternoon.

The two women sat with the families to listen to their stories and hugged many of the children. They posed for a selfie with a little boy. Maisy and Finnegan, who are the daughters of Hunter Biden and his first wife Kathleen, joined them that day.

The first lady and the Queen also met with Chef José Andrés and volunteers at his World Center Kitchen. Andres’ team has worked in Ukraine to help with humanitarian efforts and is helping to feed refugees across Europe.

Andrés took a selfie with Jill, Letizia and some of his volunteers. He then showed the two women his operation. 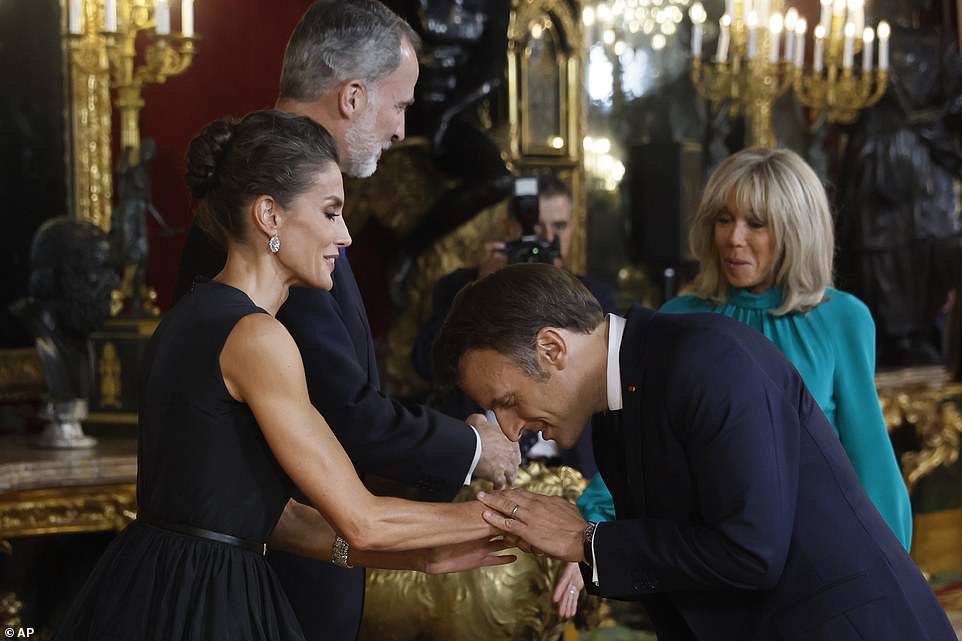 French President Emmanuel Macron kisses the hand of Queen Letizia of Spain as his wife, Brigitte Macron, speaks with King Felipe of Spain. 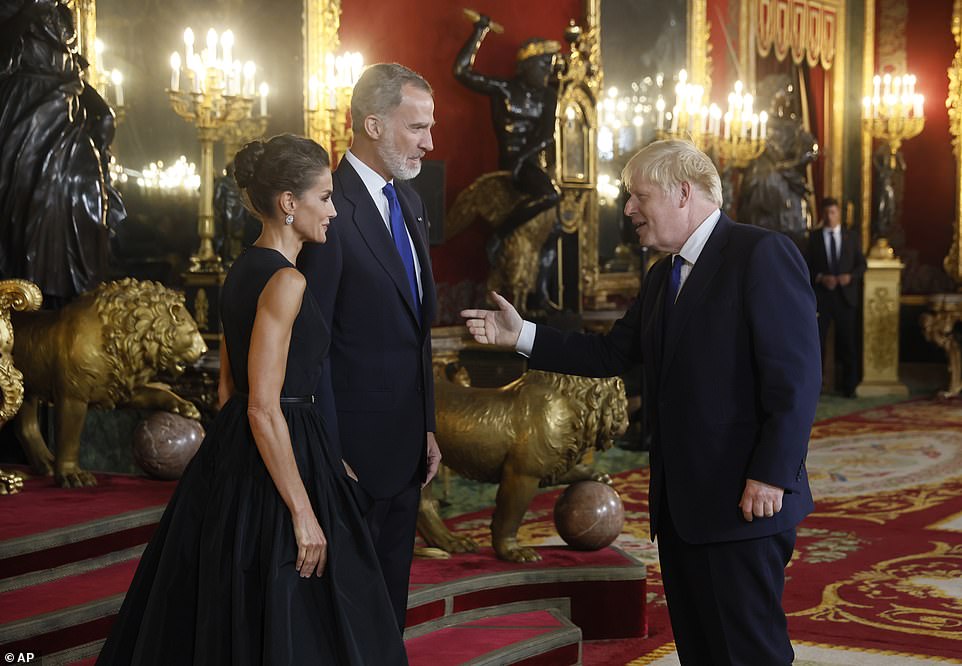 British Prime Minister Boris Johnson speaks with King Felipe and Queen Letizia of Spain during a reception at the Royal Palace. 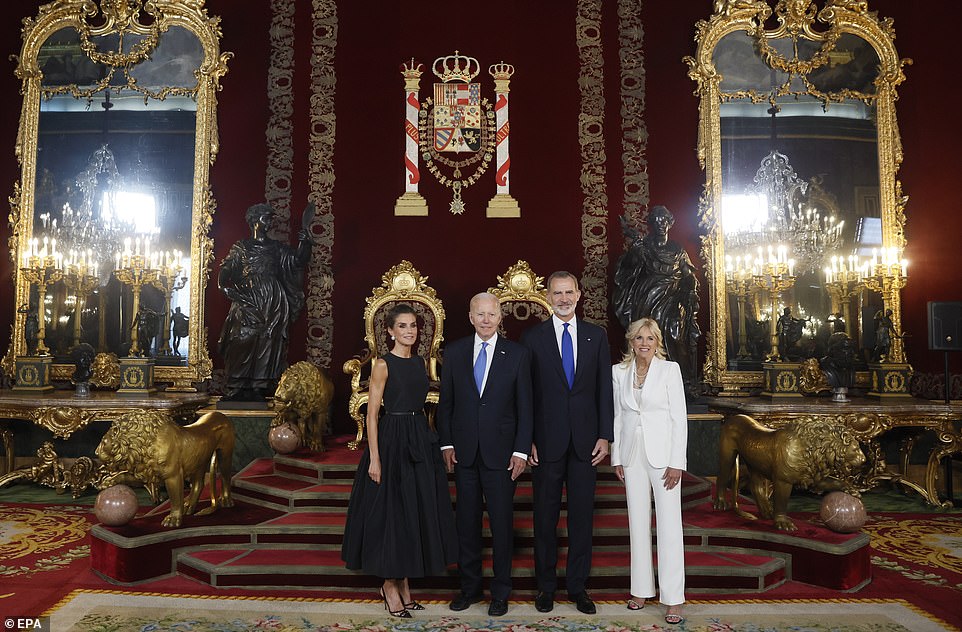 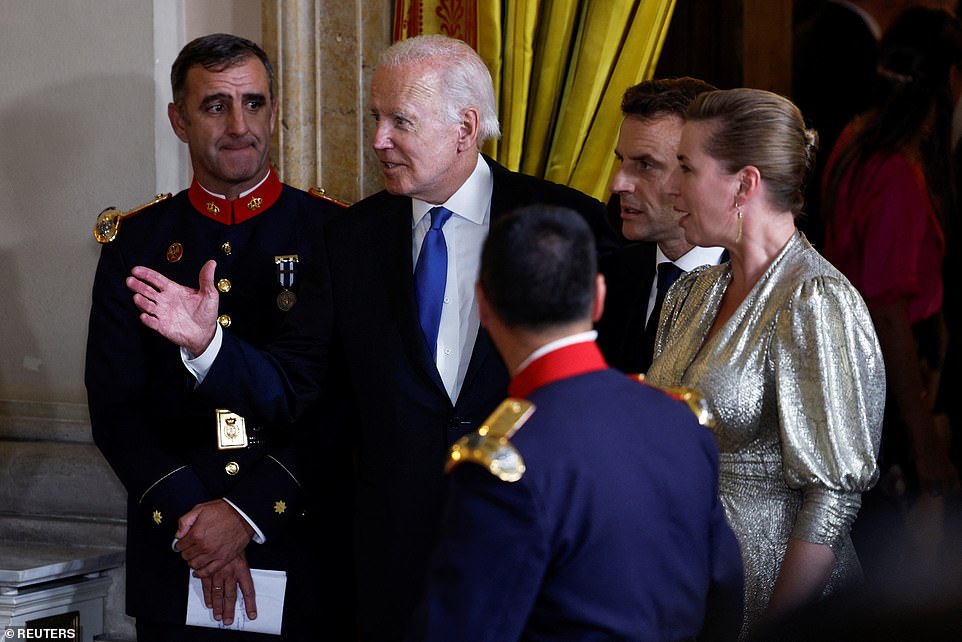 President Biden, for his part, held a bilateral meeting at the palace with King Felipe, who ascended the throne in June 2014 after the abdication of his father.

Biden, who arrived in Madrid on Tuesday afternoon, thanked the king for welcoming immigrants from the southern border of the United States.

The president noted that many children in the United States these days are native Spanish speakers and that the future of America “depends heavily” on the assimilation of that population.

‘You know, I tell people the idea that we’ve always had large migration flows into the United States over the years: we’re a nation of immigrants. But this is a statistic that, I think 24 out of 100 students in grades one to 12 in the United States speak Spanish, speak Spanish as their original language,” Biden said during a meeting with the king at the Royal Palace in Madrid.

‘Then the future of my country depends considerably on an assimilation of a population that has grown to have the same values ​​that you have,’ he said.

The Hispanic population in the United States is the fastest growing population.

It reached 62.1 million in 2020, a 23% increase from the previous decade that outpaced the country’s overall population growth of 7%. Pew Research Center found.

Biden also thanked the King for his help with migrants crossing the southern border of the United States.

“Your help in Latin America is also extremely important,” he said.

“The help, support and input have been extremely valuable,” he noted.

Spain has committed to accepting a significant number of Central American refugees who enter the US illegally. The largest group of immigrants crossing the southern border comes from Central American countries, which are Spanish-speaking.