OTTAWA: Jagmeet Singh thinks that maybe the universe is telling him something.

As a teenager in Windsor, Ontario, the future leader of the New Democratic Party drove a pickup truck with horrible tires. They kept deflating and he kept having to change them. Eventually he got pretty good at it.

Later in life, he noticed opportunities to use this ability. In 2012, Singh was in New York City with friends when they spotted a taxi driver with a flat tire. Singh sprang into action, loosened the nuts, and changed them. He even took off his shirt and flexed his arms while his friend took photos.

Something similar happened with swimming. Singh grew up with a pool in his backyard and took lessons for years. Now he says he can “basically last forever.” And that’s a good thing, because he’s apparently used this ability to prevent people from drowning on three separate occasions: once in the Bahamas, once in Australia, and once on the Credit River in Mississauga.

“Maybe the universe makes this happen when you’re good at something,” Singh reflected recently in a boardroom in the NDP’s Jack Layton Building in downtown Ottawa. “I always want to help if I can.”

Now Singh is involved in something else he feels he’s good at: campaigning in a federal election after Liberal leader Justin Trudeau announced that Canadians would go to the polls on September 20. Many New Democrats attribute Singh’s strong campaign performance to averting the electoral disaster in 2019, when expectations were so low for the party that Singh and his entourage danced in celebration in a Burnaby hotel ballroom after that the NDP lost 15 of its 39 seats. At 42, he’s hardened by nearly two years of fair politics in a minority Parliament, and he’s riding high with positive signs that many Canadians find him likable, and an announcement just before the campaign launch that he and his wife, Gurkiran Kaur Sidhu, are expecting their first child.

This means that Singh entered his second election campaign under a new kind of pressure. The party has more than twice the money to spend, better results in polls, and higher hopes of regaining seats lost since the “orange wave” of 2011.

It is no longer enough to defend the territory. Singh needs to expand it.

Singh, a proud Sikh, often attributes his political skills to the teachings of his mother, Harmeet. These include the idea of Chard kala, which he defines as “defiant optimism” in the face of adversity, as well as the spiritual notion of “radical empathy”, where everyone is connected to the point that a person’s pain is felt by all of humanity.

His vision of leadership is also based on this tradition. In the Sikh context, Singh said that the word for “leader” is mukh sevadar, which “literally means ‘servant’.

“It’s a different approach,” he said. “It doesn’t come from the arrogance of being the boss. It is for the honor of being the one who has been given the responsibility to serve. “

As Singh and those close to him tell it, these concepts are a lodestar for the NDP leader, in his political career and in his personal life. He has faced significant difficulties in both, although he maintains that “his worst day as an adult is much easier than my easiest day as a child.”

Growing up in Windsor in the 1980s, Singh says he battled bullies on the playgrounds who hurled racist slurs like “diaper head” and called him “dirty” because of his brown skin. When he enrolled in taekwondo to learn to defend himself, he was sexually abused by his coach, a trauma that, as Singh writes in his 2019 memoir, “Love and Courage,” took him years to recognize and process.

Singh’s father also drank heavily. Eventually he lost his job and Singh moved to London, Ontario. with his younger brother, Gurratan, who attended high school while Singh majored in biology at the University of Western Ontario.

“One of the things I remember about him is … he was trying to keep his family afloat,” said Amneet Singh, a childhood friend of Gurratan who remembers the future NDP leader coming home to make money for them. children late at night after work. late at one of his three jobs.

Singh eventually abandoned his plans to become a doctor and went to law school, thinking it was a faster route to a higher income. He graduated from Osgoode Hall and worked for a number of years as a criminal defense attorney in the greater Toronto area. 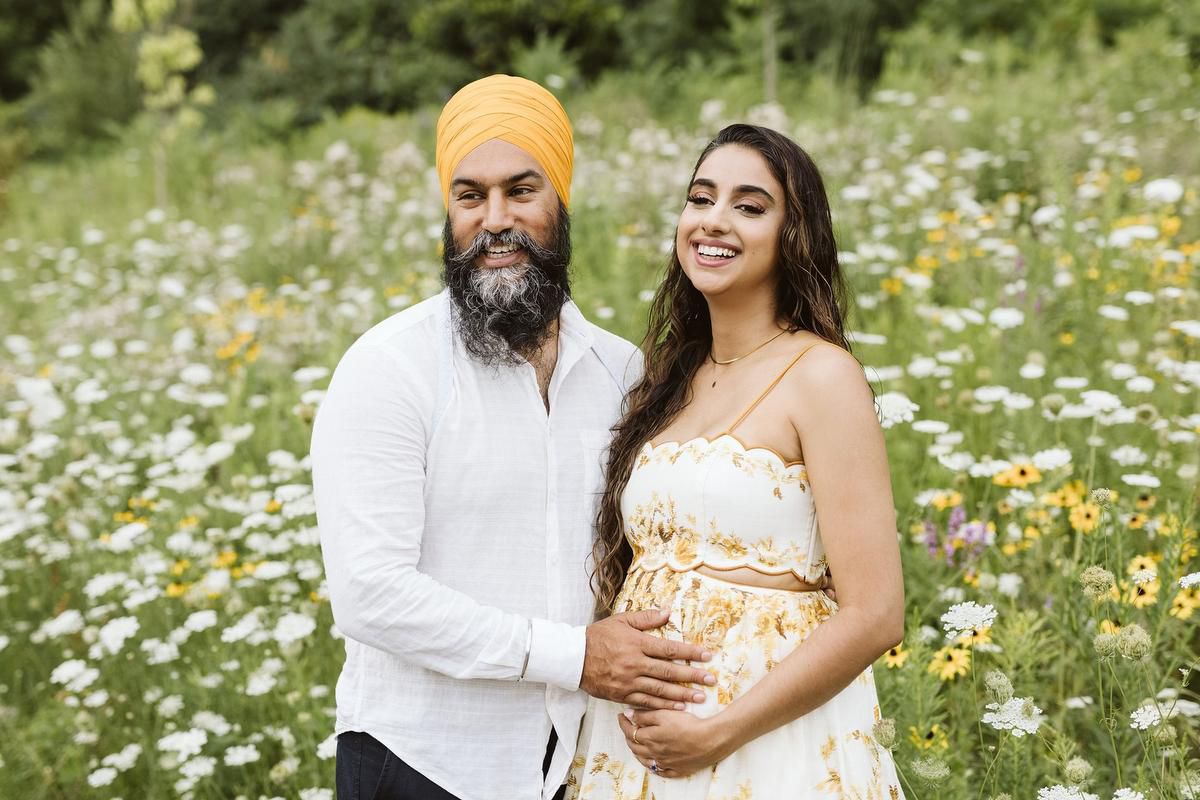 Jagmeet Singh and Gurkiran Kaur Sidhu recently announced that they are expecting a baby.Twitter

In 2011, they were involved in Brampton-based activist circles, and Amneet and Gurratan convinced Singh to run for the NDP. For the next six years, Singh was the MPP of Brampton East, a time when he earned a reputation for his strong social media presence, flashy outfits, something he has described as a kind of “armor” against racism, and his affection for bicycles.

Then, in 2017, he achieved victory in the NDP leadership race, when he raised more money than all his opponents combined and won the majority on the first vote.

Unfortunately for Singh, his momentum stopped there. Throughout 2018, his leadership was marred by a series of setbacks and difficulties. Dozens of new Saskatchewan Democrats rebelled at Singh’s decision to expel one of the province’s few NDP MPs from the caucus on allegations of sexual harassment. He caused a sensation in the media by stating that political violence in India was too complicated to report in a “simplistic way”. And once, just before his party was defeated in a Quebec election, Singh missed his flight and had to drive himself from Ottawa just to make a late appearance.

In January 2019, Jennifer Howard joined Singh’s staff as her new chief of staff. Howard, a former Manitoba NDP finance minister, had seen politicians rage at criticism and reject the advice of his advisers. When Howard first met him, he found he was refreshingly willing to accept him.

“He wasn’t naive about the challenges ahead and he wasn’t closed to learning how to be a better leader,” Howard recalled. “You don’t always agree with the assessment or the advice … but I think it comes from a real, deep trust that allows you to say, ‘Yes, I could have done better.’

Singh said it helps to meditate.

Yet while he is open to learning, those around him insist that he has not fundamentally changed as a politician. Singh has always tried to appeal to voters on personal terms: He proposes universal pharmaceutical care as a means of helping an Edmonton woman named Shannon pay for her medications, rather than, say, a prudent power pooling measure. national purchasing power.

The basic discourse of the NDP to the electorate has also not changed under Singh’s leadership. As in 2019, Singh and the New Democrats want to convince voters that Justin Trudeau’s liberals are in debt to the rich and that only the NDP can be trusted to implement progressive policies, such as a wealth tax on the one percent, to benefit all Canadians.

For Amneet, who is now the party’s digital director, this consistency is based on the belief that people just like the leader of the NDP. “The more people know about you, the more they gravitate toward your message, because they know it’s genuine,” he said.

One such person is Melanie Noto, a 40-year-old hairdresser from Brandon, Man.

I note, you have never been in favor of politics, you said you found “my boy” when Singh arrived. It also helps that Howard, Singh’s chief of staff, is Noto’s cousin.

This summer, when Noto was preparing for open heart surgery, Singh sent him a video message of encouragement. It shows Singh in a pink turban explaining the concept of Chard kala. Noto watched the video over and over in the final moments before her procedure. Now she is such a fan of Singh and his advice that she says she could get a tattoo of the phrase.

Marie Della Mattia believes that Singh’s personality is an important part of what makes him a good politician, especially in the election campaign. As special advisor, Della Mattia was with Singh during the 2019 elections and will be again for the current campaign.

It remains to be seen if Singh can end the 2021 campaign with the same congratulations. With a deeper war chest and a more experienced leader, his party hopes the campaign will win more seats.

“I know from the heart that not just more new Democrats, but a new Democratic government, will improve people’s lives,” Singh said. “I’ve seen it. I tasted the difference we can make.”

Many readers will say that you are dreaming. And that is true. Singh is a man who wonders if the universe set him up to change people’s tires.

One night in early August, Singh was driving from Toronto to Ottawa. When he’s on the road, he likes to make stops, often to jump into a lake or explore something interesting, he said. And that night he noticed a sign for a dark sky preserve, a place free from light pollution that blocks the cosmos.

“I stopped and stood there for a bit, because it was dark and I thought, ‘Great,'” Singh said.

Then, on the cusp of his second election campaign, and hoping for a breakthrough, the NDP leader looked up and gazed up at the stars.