The curtain has fallen on the pomp and splendor of the last two weeks, which included the funeral of Queen Elizabeth II and the transition period between the second Elizabethan reign and the reign of King Charles II. We’ve seen it all: a gun carriage carrying the monarch’s coffin, marching bands, the Household Cavalry, members of the Royal Family on vigil and, of course, the Queue.

But what really caught my eye during the process was the Orb, the Scepter and of course the Imperial State Crown that adorned the coffin of Queen Elizabeth II. The impressive crown is formed by an openwork gold frame, set with three huge stones and set with 2,868 diamonds in silver settings and colored stones in gold settings, including 17 sapphires, 11 emeralds and 269 pearls.

At the front of the crown band is the large cushion-shaped brilliant Cullinan II, the second largest stone cut from the Cullianan diamond, which is also known as the Second Star of Africa. This crown was made for the coronation of King George VI in 1937, but is closely based on a crown designed for Queen Victoria in 1838 by the crown jewelers of the time, Rundell, Bridge & Rundell. On the Scepter is Cullinan I, also known as the Great Star of Africa. The diamond is cut from a larger gem that was mined in South Africa in 1905, weighs about 3,106 carats in its original condition, and is believed to be the size of an average human heart.

The Queen’s death and the fact that the Crown Jewels were so clearly on display has reignited conversations about the reign of Queen Elizabeth II and her legacy of colonialism. These talks have led to calls for these diamonds to be returned to South Africa with immediate effect. Social media has been inundated with users demanding that the diamonds be returned and displayed in a South African museum, and that repairs be paid. More than 6,000 people have signed a petition demanding that the British royal family return the diamonds to South Africa immediately.

Diamonds have a dubious history. They were discovered in a mine in 1905, and were quickly purchased by the Transvaal government of South Africa, which was controlled by the British at the time, and then presented to the then monarch, King Edward VII, as a birthday present. Many say that the mining networks at that time were illegal due to colonial rule: the British took over the mine and stole the land that belonged to the local population. In effect, the Royal Family received a diamond that was stolen in the first place, and now it is time to return it. 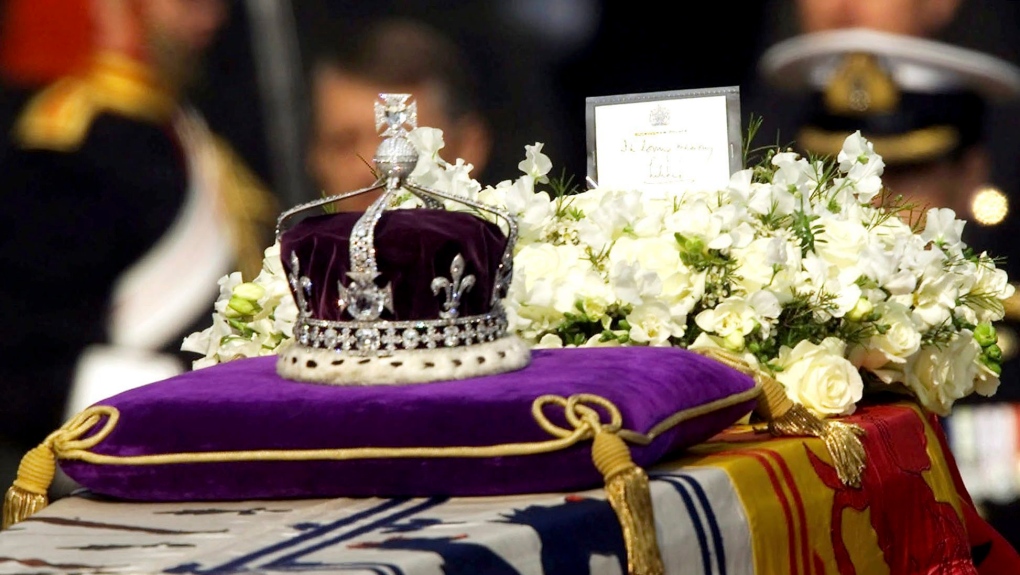 In this April 5, 2002 file photo, the Koh-i-noor, or “mountain of light,” diamond set in the Maltese Cross on the front of the crown made for Britain’s late Queen Mother Elizabeth, looks at his coffin. (AP Photo/Alastair Grant, File)

There are also calls for the Koh-i-Noor diamond, which is set in a crown made for Queen Elizabeth I, to be returned to India as well after it was taken away under duress by the British East India Company in the decade. from 1840.

It was part of an exhibition in 1851 and some people dared to point out that the diamond was part of an operation to plunder India by the British, but these calls were largely ignored.

Prince Consort Albert had the diamond cut to mitigate the scandal and it later became the focal point of the crowns of Queen Alexandra and Queen Mary before the stunning jewel was finally placed in the Queen Mother’s crown in 1937. It has been part of the crown jewels. since then.

Some might say this is an insensitive time to discuss requests for certain crown jewels, but is there ever a good time to discuss topics that are uncomfortable? If there’s one thing about such a public and collective outpouring of grief, it shakes you up and creates space for uncomfortable conversations. What cannot be ignored is the legitimate concern of the citizens of the countries of origin of the diamonds that colonialism appropriated them and therefore they must be returned.

Earlier this year, London’s Horniman Museum said it would return a collection of 72 items called the Benin Bronzes to the Nigerian government. Horniman’s collection is a small part of the 3,000 to 5,000 artifacts taken from the Kingdom of Benin in 1897 when British soldiers attacked and occupied Benin City as Britain expanded its political and commercial influence in West Africa.

The British Museum alone has over 900 objects from Benin, and the National Museums of Scotland has a further 74. Others were distributed to museums around the world. They also face increased pressure to return these items to Nigeria, where they will be displayed at the Edo Museum of West African Art, due to open in 2025.

The case of the Benin bronzes shows that, with proper consultation and discussion, artifacts can be returned to their rightful homes.

I am not saying that we storm the Tower of London and dole out the Crown Jewels, but at the height of this new era of Monarchy, it is time for King Charles III and his heir, Prince William, the new Prince of Wales Take a look at the royal family’s colonial past and the riches acquired by it and whether those items have a place in your kingdom’s multicultural future.

Returning jewelry and artifacts to where they belong is a good place to start.