The Ukrainian city of Kherson got a new mayor this week.

There was no election campaign in the city of nearly 300,000 on the Dnipro River. No pesky lineups to vote, either.

There have been fireworks, of a sort, but nothing to celebrate — not for those who fled their city when the Russian invaders arrived, not for those left behind.

Out was Igor Kolykhaev, mayor since the 2020 local election. In was Moscow’s man, Oleksandr Kobets, a retired employee of the Soviet and Ukrainian spy agencies who last called Kherson home in 1991, according to the Security Service of Ukraine.

“They read an order which said that, ‘As of this day, responsibility for Kherson will be fulfilled by the new mayor, and so on and so on,’” Kolykhaev told the Star.

“After that, they asked us to collect our personal things from the offices.”

It is what democracy looks like these days in Russian-occupied Ukrainian cities.

The Russians hail Kherson, Mariupol, Melitopol, Berdyansk and the many cities currently under their control in the south and east of Ukraine as liberated zones. To the Ukrainians, they are occupied territories that Kyiv, with the weapons and the backing of western countries, is determined to win back.

To Kolykhaev, who remains in Kherson, trying to oversee the provision of essential goods and services to desperately worried residents while negotiating a humanitarian corridor for those who want to flee, it is a dilemma — one with life-threatening consequences.

“The order was given by the (Ukrainian) regional administration that if your life is not threatened, continue to work remotely. If your life is threatened, get out of Kherson any way you can,” he said. “There’s only one question: How?”

In the town of Melitopol, about 200 kilometers east of Kherson, the transition to Russian rule was downright thuggish.

Ivan Fedorov, who was elected in 2020 with six of every 10 votes cast, was abducted from City Hall by Russian forces on March 11.

On that day — the first of five before he was exchanged for nine captured Russian soldiers — the 33-year-old was forced to sign a resignation letter handing power to an opposition city councillor, Galina Danilchenko.

On March 17, the day of her first meeting with media as Melitopol’s new mayor, Danilchenko brandished the letter as proof that the handover of power in the town of 155,000, northeast of the annexed Crimean peninsula, had been legal and orderly.

This week, Fedorov returned from a European tour meant to boost international support for Ukraine to his most pressing task: organizing food and medical supplies for delivery to Melitopol residents and arranging an evacuation window for those who want to leave.

Danilchenko, meanwhile, on Thursday announced swimming classes at the local pool, the re-opening of a movie theatre, the return of Soviet-era decoration to the town’s Victory Arch in time for Second World War Victory Day celebrations on May 9, and the resumption of pension and public-sector salary payments — in Russian rubles, not Ukraine’s currency, the hryvnia.

All was hunky-dory, in other words.

Then a bridge blew up. 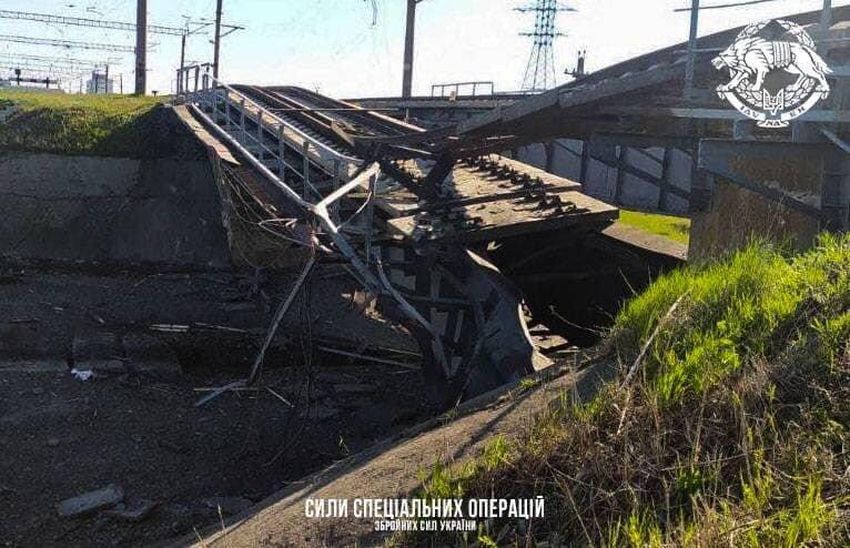 Ukraine’s Special Operations Forces Command was quick to claim responsibility. It was a train bridge between Melitopol and Crimea, the southern Ukrainian peninsula illegally annexed by the Russians in 2014.

“For Russians, it was an important logistics point on the way from occupied Crimea to Melitopol,” the military unit said on its Facebook page. “Given the proximity of the bridge to Crimea, the occupiers’ need for this structure and its large dimensions, which make it difficult to repair, it was decided to destroy the object.”

Those civilians who remain in the occupied territories are understandably worried. On one side, they face interrogation and detention by Russian forces, which are on the lookout for Ukrainian soldiers, spies and activists. On the other are Ukrainian troops determined to take reclaim their land.

On Wednesday, the day after installing a pro-Russian mayor in Kherson, a nighttime explosion in the city center shattered windows in a number of buildings, including at City Hall. On Thursday, a wildfire broke out on the city’s outskirts. Rockets are spotted in the sky. Shells explode in the distance.

In response to a video update posted by Melitopol Mayor Fedorov this week on Facebook, a woman wrote to him in the messages of her deepest fear — that those in Melitopol might suffer the same fate as those who were massacred in the Kyiv suburb of Bucha, or those who were trapped in the besieged port city of Mariupol, if fighting breaks out to retake the city.

A potential humanitarian disaster awaits those cities where essential services are not, or cannot, be delivered. Kherson’s elected mayor, Kolykhaev, compared his city to him to a car that is steadily consuming fuel.

He has asked for urgent instructions from Ukrainian President Volodomyr Zelenskyy about what is expected of him, the city workers and an estimated 200,000 other residents who are held “hostage” in the city.

“There’s nowhere to go to. There’s no humanitarian corridor,” Kolykhaev said. “We need to know what to do so that the status of ‘hostage’ does not become the status of ‘collaborator.’”

Cases of collaboration or high treason are being investigated throughout the occupied Ukrainian territories including:

On Friday, the Security Service of Ukraine released blurred photographs of Kherson city councilor and former mayor Vladimir Saldo, who was named governor of the Kherson region by the Russians, and Oleksandr Kobets, who was installed Tuesday as mayor. The two men are officially suspected of treason, which carries a penalty of life in prison.

But the threat of charges does not seem to have deterred Saldo, who held his inaugural news conference Friday.

Kherson, he proclaimed, will be a bilingual region where the Russian language has the same status as Ukrainian, but the Russian ruble, which is reportedly to be phased into the local economy as early as this weekend, will take precedence. The Ukrainian hryvnia is to be phased out by summer’s end.

It’s an indignity to loyal Ukrainians trapped in the city, but not the most pressing concern.

“For me, the most important thing is to save peoples’ lives so that they don’t have to hide in shelters and basements,” Kolykhaev said. “So that we don’t become another Mariupol.”