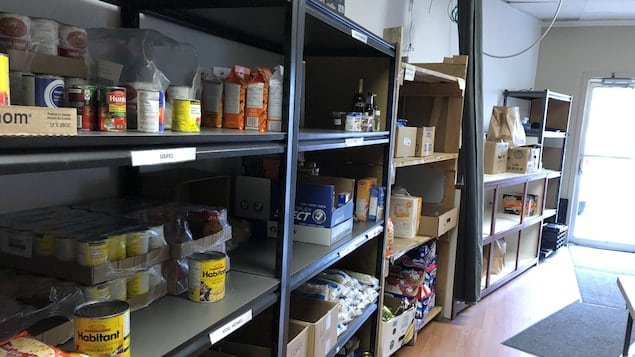 In the summer of 2021, camps and tents were a little more present than usual in eastern Gatineau. According to the director general of the Table de développement social de la Lièvre, Hélène Desgranges, this is what prompted players in the sector to sound the alarm.

The actors were worried because they had more requests, but not necessarily from organizations in our sector that were specialized in homelessnessshe says.

Seniors sleeping in shelters and homeless families, these are some examples cited by the Director General.

A few months later, in December, some twenty actors chose to get involved and get involved in a new homelessness committee, headed by the Table de développement social de la Lièvre.

At the start, the idea was to have a place quickly to be able to offer warmth to these people for a few hours a day. explains Ms. Desgranges. The organizations were ready, there were speakers from each organization. We had made a schedule, we were ready to intervene in the environment.

The committee wanted this office to open its doors in the Buckingham sector, a central location since the Table de développement social de la Lièvre also serves municipalities outside Gatineau, notably Papineau, Val-des-Bois and Thurso, where there are also needs.

This would have allowed him to draw a portrait of people in need and to better identify the needs and the necessary services.

Not in my backyard

Despite their research, visits and calls on social networks, the committee did not find a location.

Everything that was sold for rent, or almost, we looked at. We made calls, we visited, but we always had the door closed because homelessness is not in my backyard. laments Ms. Desgranges.

Housing, commercial premises and even the City of Gatineau, Ms. Desgranges maintains that the committee went through a range of options, without success.

The organizations have finally decided to set aside the local project for the moment and to hire a worker who will be in the field during the summer.

Of course, sometimes the heat is just as bad as the cold for these people, but at least having a worker in the field who will be able to meet them, get them to get the services in the organismsconsoles the general manager.

Another way to help customers will be the distribution of lunch boxes adapted to homeless people. No need to have a microwave or fridge to enjoy it.

But they are more than a midday lunch, supports Anne Mercier, general manager of the food bank La Mie de l’entraide and of the Table de Bethléem, Work of Edna Charette, who is in charge of it. They will serve as troubleshooting.

It has been more than two years since Ms. Mercier raised the flag and thought about ways to help these people. But beyond these boxes, the organization plans to open a soup kitchen, it hopes, by next winter.

It’s really that these people can drop off, take the time to eat, be able to talk, there will be speakersemphasizes Ms. Mercier.

It is on this initiative that the Roaming Committee of the TDS bases its hopes to have a better idea of ​​the clientele in order to identify the services that the sector needs in this area.

La Mie de l’entraide offers food assistance to people in need. Over the past few years, the number of people to whom the organization has been helping has steadily increased.

In April and May, La Mie de l’entraide noted a 39% increase in people helped compared to the previous year.

In April and May, the organization saw a 39% increase in people helped compared to the previous year.

It’s worrying because the price of gasoline, then the food, the price it costs and there are often only afterwards, the accommodation, we won’t talk about it, here it’s ridiculous. So after they have paid for their accommodation first, very often there is nothing else.

” Try to get accommodation below 1400. Even in Buckingham, that’s no longer to be found. It is a rarity. »

Ms. Mercier maintains that there is not enough affordable housing. But the organization says it is ready, its emergency boxes are already ready for the day of the move.

Still work to do

It is there, the reality. There is homelessness in our area launches Buckingham District Councilor Edmond Leclerc. There are people who have difficulty finding food and housing.

The elected official says that the City of Gatineau is taking the situation very seriously.

We try to find solutions quickly and as concretely as possible.he argues. Because indeed, it’s something like advising in any case to see that there are people in the Buckingham Masson-Angers sector, it’s a reality. And then, of course, we want to be part of the solution.