Fans of the Calgary Flames are repping their favorite jerseys, heading down to the Red Mile and cheering louder than ever in hopes of rallying their team to a Game 3 playoff victory against the Dallas Stars.

The best-of-seven series is deadlocked at one game each with both teams achieving victories at the Saddledome.

Calgary now heads to Dallas for its next two playoff games, but one Flames superfan still plans to enjoy Saturday night’s matchup as if it was a home game.

“It’s my home away from ‘Dome,” said Dean McCord who has transformed his entire living room into what he calls a “Flames Shrine.”

The room is set up with bar stools, three couches, dozens of jerseys throughout the Flames franchise history, countless pieces of autographed memorabilia and multiple TV screens, including a massive 82-inch screen for the ultimate viewing experience.

A TV is also set up in the kitchen so he doesn’t miss a single moment of the game when grabbing a beverage.

But perhaps the most amazing feature of the entire room is the remote-controlled light show and goal horn set up for every time the Flames score.

“I have a little remote and we like to fool everyone and tell them it’s hooked up to the Saddledome even though it isn’t,” McCord jokes.

“All I do is press a button when Calgary scores so you hear the goal horn and there’s two songs with looped cassette tapes that play the song ‘Burn Baby Burn’ and ‘Celebration.’ Of course, I also play ‘Ring of Fire’ when the Flames win so it feels like you’re right at the Saddledome.”

McCord has been collecting Flames memorabilia for several years and spent roughly $20,000 on the entire home set up, but he calls it a ‘priceless’ collection that friends and family members adore.

“This is our season ticket,” he said.

While most Flames fans are confident in the ability of a team led by powerhouse players such as Matthew Tkachuk and Johnny Gaudreau, some fans say winning the Stanley Cup is a guarantee this year.

Long-time ‘C’ of Red supporter, Eric McComish was so assured that the Flames would ‘win it all’ this season that he got a 2022 Calgary Flames Stanley Cup Champion tattooed on his left calf in November of last year.

“I’ve been thinking about getting on for probably five years and after they won four or five games in a row early in the season, I finally went out and got it,” he said.

“I have no regrets, it’s funny because it was probably about a week and no one noticed it other than my friends and family, but then it went viral. I started thinking you know maybe this wasn’t the smartest idea after reading just thousands of comments from people roasting me online, but no regrets!”

McComish admitted that a recent Flames loss in Game 2 made him anxious and if the Flames don’t go all the way, he might have to make some changes to his new ink.

“I’m gonna have to get it cheese grated off,” he joked.

“I think honestly, I’ll probably just wait until we do win it if it’s in my lifetime and I’ll just cross it out and get the actual year but underneath. Regardless, a Stanley Cup would be crazy!”

Flames fans Chris Boudens and Chantel Fox have more than one million followers on Tik Tok and it’s all thanks to the amazing talents of their two purebred Siberian husky dogs, Nico and Jackson, and their golden retriever, Zoey.

“You’d never guess that they could be so loud,” said Fox. 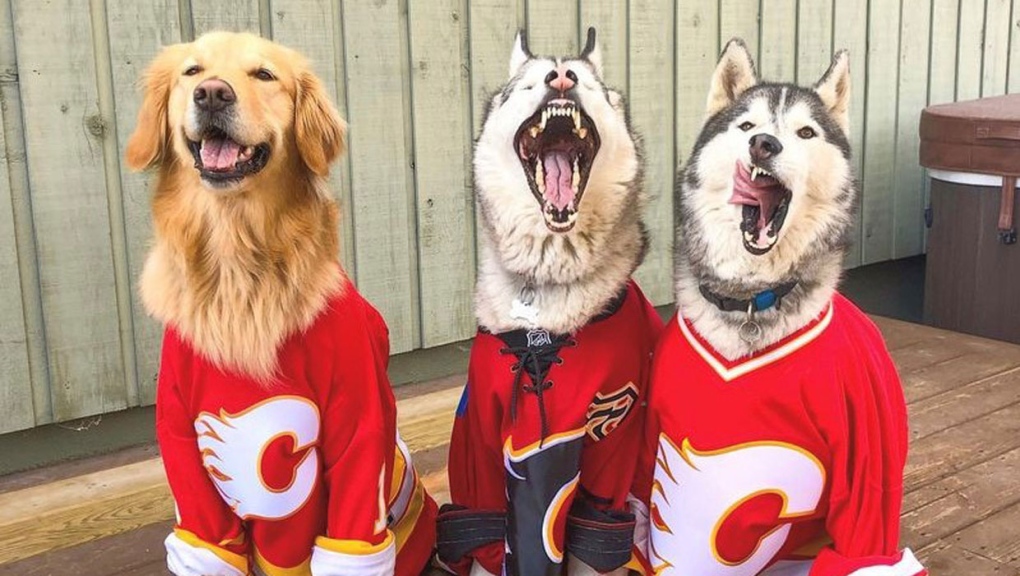 The trio has gone viral online as they each wear Flames jerseys and cheer on the team. Nico and Jackson howl louder than ever to show their support, while Zoey is a little more reserved.

“It’s kind of funny because there’s a lot of anxiety during the games,” Boudens said.

“Jackson definitely senses that, he comes up to you and gives you kisses and tries to calm you down.”

Videos featuring the pups have received millions of views online.

Boudens and Fox who live together in Fernie, BC are both diehard fans of Calgary and hopes their pups provide other fans with a little bit of extra cheer during the playoffs.