Mercedes team boss Toto Wolff described their car as “undriveable” and said that Lewis Hamilton “deserves better from us” after the seven-time world champion could only finish 13th in the Emilia Romagna Grand Prix.

Wolff apologized to Hamilton on team radio at the end of the race.

Team-mate George Russell did manage to finish fourth after a superb start.

Hamilton said it was a “weekend to forget” and that he “just wasn’t fast enough to overtake” at Imola.

To add insult to injury, he was lapped by race winner Max Verstappen in the Red Bull.

He also reiterated that he was no longer fighting for the drivers’ title, saying: “I am out of the championship, for sure. There’s no question about that.”

Hamilton said the one bonus for the team was fellow Briton Russell’s climb through the field after starting 11th – although he apologized for not also getting into the points.

Formula 1 heads to the United States next for the inaugural Miami Grand Prix, from 6-8 May. 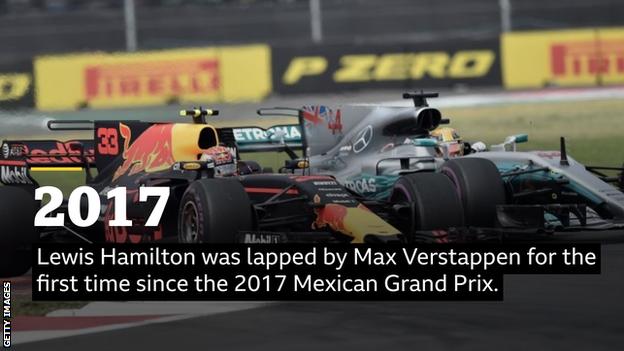 Mercedes have dominated the constructors’ championship in the turbo hybrid era and secured an unprecedented eighth consecutive title in 2021.

But this season’s regulation changes have not worked in their favour, with both cars experiencing seriously ‘porpoising’, a phenomenon caused by an increase – then a sudden decrease – of downforce.

“You see the bouncing on the main straight, I wonder how the two of them can even keep the car on the track at times,” said Wolff.

“Both drivers are doing the utmost and out-performing the car. We have seen that reaping the results for George, who did an outstanding race – perfect start and then handling a car that wasn’t tuned optimally.

“And Lewis was just stuck in the back.”

The weekend started badly for Hamilton as he was knocked out in Q2 during Friday’s qualifying session, having to settle for 13th on the grid for the first sprint event of the season.

He then lost a place during Saturday’s 21-lap race, dropping him further down the order for Sunday’s grand prix.

As Hamilton crossed the line after being stuck behind a train of slower cars, Wolff told him: “Sorry for what you had to drive today. I know it was undriveable. This was a terrible race. We will come out of this.”

The Mercedes team principal also acknowledged in his post-race interview that the talent of Hamilton and Russell did not merit their current situation.

He said: “We have two of the three best drivers and they deserve a car and a power unit that allows them to fight in the front rather than being lapped. That’s not what either of them deserves.”

Russell has fared better at Mercedes so far this season, scoring a top-five finish in each of the first four races, including a podium at the Australian Grand Prix. He is 21 points ahead of Hamilton in the drivers’ championship.

“In terms of results, we are getting the most out of it,” said Russell. “It gives me and the team confidence that when the car improves, we will get more points on the board.

“But we can’t sustain this level of results if we don’t improve the pace of the car.”

The 24-year old former Williams driver, who replaced Valtteri Bottas at the Silver Arrows for 2022, said that both he and Hamilton were “equally struggling” with their cars.

I added: “I expect [Hamilton] to come back so strong and the way he is pushing and motivating the team is inspiring. I am not getting comfortable with this position because I know what he’s capable of.”