On these days, the sun, which rises and sets in different areas of the sky throughout the year, is slotted perfectly in the canyon between tall buildings lining major east-west streets, creating a gorgeous view of the sun shining unobstructed.

This event occurs at various points in the year in many cities built with grid plans, including Montreal, Chicago and New York City. 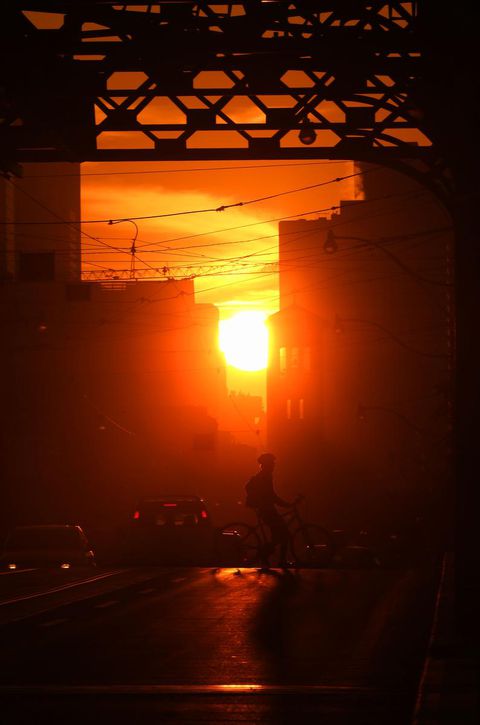 In Toronto, it’s next happening Tuesday at 6:28 am This is the ideal moment to snag a photo of it, but slightly less perfect pictures can be taken each morning the following week, until the sun begins to rise too far north.

Astrophysicist and New Yorker Neil deGrasse Tyson named the phenomenon “Manhattanhenge” in 1997, after English monument Stonehenge, which was built so it frames the rising summer solstice sun.

While prized by landscape photographers, Torontohenge also warrants increased caution from drivers and pedestrians, one civil engineer and sun position modeller says, as road visibility is hampered by a blazing sun in full view.

“It’s dangerous for motorists and pedestrians because, if you’re driving eastbound at 6:30 am in the next week or so, you’ll be staring directly into the bright sun and have a difficult time seeing,” said engineer Ralph Bouwmeester. “A lot of traffic accidents occur within the first and last hour of light because it’s so difficult to see for drivers and pedestrians.”

Seeing Torontohenge might scratch some primal itch. Before the Weather Network was around, our ancestors were keen observers of the sun’s position in the sky as a way of gauging shifts in season and temperature.

“The sun was our way of marking time,” said astrophysicist and University of Toronto researcher Jennifer West. “In the past, people built monuments and structures aligned with sunrise and sunset. I guess we’re no different, building cities that align with the sun.”

While West has not sought out Torontohenge herself, she spent a year, 2017-2018, charting sunsets in Toronto and created a time-lapse video out of it, featuring the sun sliding along the horizon as months pass in seconds.

“It’s always worth noticing where things are in our sky,” she said. “It helps us recognize that, while we’re on this Earth, things are moving up there. Stopping to reflect on that is pretty cool.”