A train ticket, a guitar case full of shovels, and a head full of paintings and prose — these things defined Jeff Lewis’s hunt for buried treasure in Montreal.

The Saint John, NB man believes Montrealers are walking on the prize every day.

“I believe it’s right here in this park,” he told CTV while standing in Percy Walters Park, holding a replica of the treasure in his hands.

The replica is of a ghoulish-looking casque. Inside, a key, exchangeable for a gemstone worth about a $1,000 dollars from an estate belonging to an author’s family.

It’s a fantasy book about the immigrant experience in North America, filled with 12 paintings, and 12 corresponding poems.

If you can put the right poem to the right painting, the two can be used to find one of twelve buried keys.

So far, just three have been located. 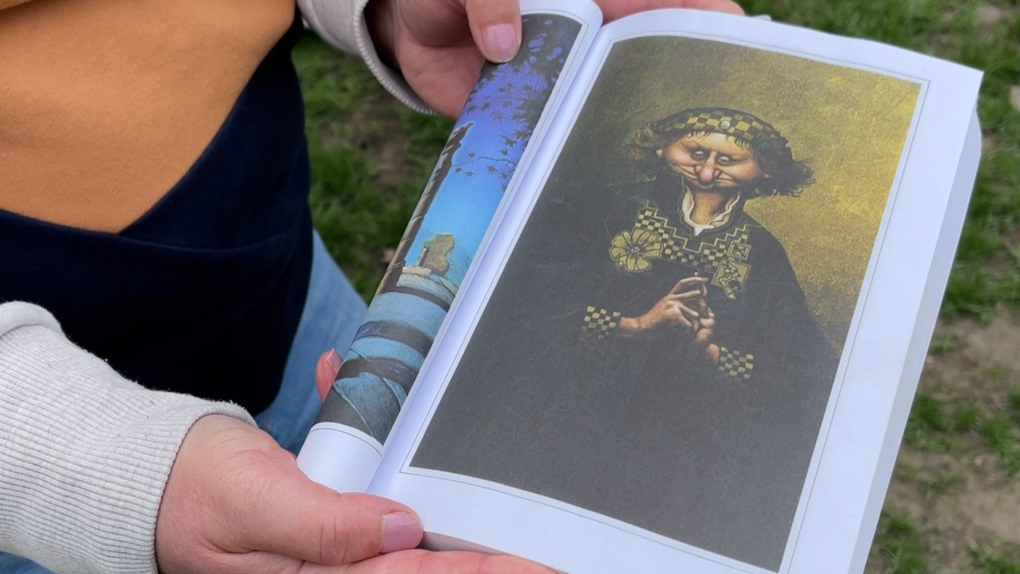 Rebecca Verdon holds a hard copy of the 1982 book “The Secret” at Percy Walters Park in Montreal on May 23, 2022. Many believe this painting hold clues to finding the key buried somewhere in Montreal. (Luca Caruso-Moro, CTV News)

The first was discovered in Chicago in 1983 by a trio of teens. One of those teens, Eric Gasiorowski, told the Chicago Tribune the gemstone was stolen in the early 2000s.

The next one was unearthed in Cleveland by a budding lawyer named Brian Zinn who unearthed it during a wedding reception in 2004.

Byron, who reportedly expected all of his treasures to be found within a matter of years, wouldn’t live long enough to know just how long his riddles have endured.

The last of three found treasures wouldn’t be found until 2019 in Boston by Joshua Gates during an episode of Discovery’s “Expedition Unknown.”

Hoping to join that lineup of victorious hunters, Lewis strolled into the park, leading a gang of fellow searchers into an undisclosed precise location.

“I always wanted to be a treasure hunter exploring new stuff,” said nine-year-old Joshua Sommerstein, one of the younger members of the team, which included his brother and parents.

Lewis began by sticking a long orange probe into the ground, feeling for the flat plastic box holding the casque.

Lewis had been thinking of where the key could be for a few years before arriving at the site. He says he’s felt like he’s had the answer for at least two years, but the Atlantic bubble kept him from venturing too far from home.

It’s generally agreed among countless message board users that the key is somewhere in Montreal.

One key point is an insignia on the subject of the portrait’s chest – what appears to be a dog chewing on a deer’s leg.

An extremely similar image can be seen at the base of a lamp post at the nearby George Stephen House, the former home of a Scottish-born businessman who immigrated to Montreal in 1850 and made his fortune in the textile industry. 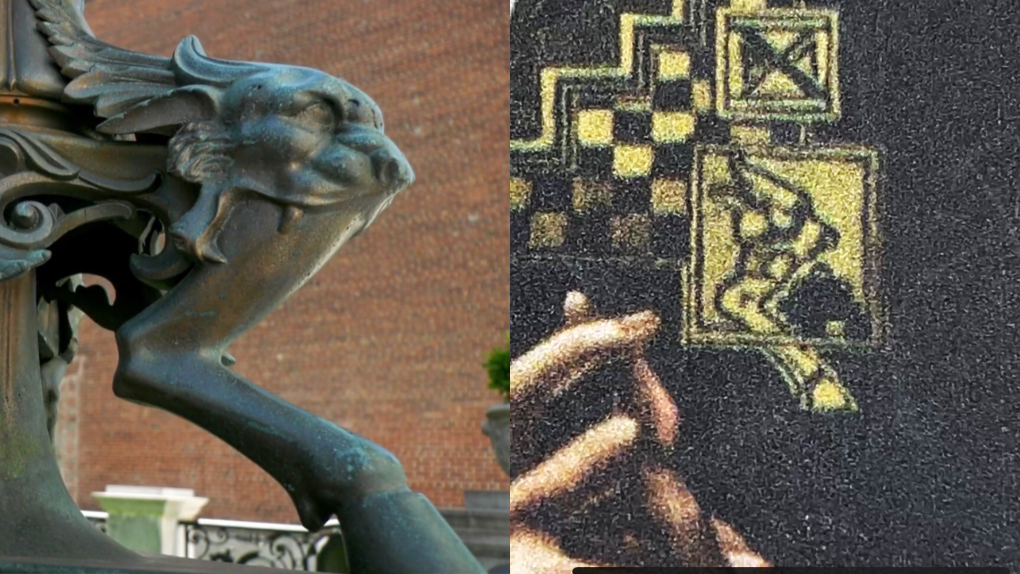 A full breakdown of each of the clues can be found here.

Some time passed — more testing. A man approached them asking if they were looking for The Secret, and told them he himself had spent a whole previous summer probing the same area. I wished them luck, and left.

Lewis had struck the same depth several times in the same patch of dirt.

“We heard something!” exclaimed Sommerstein, as he and his brother de él jumped repeatedly, striking the orange stick down into the dirt to make a “tap tap tap” on whatever was buried there.

He and Joshua’s father, Keith Sommerstein, turned to their guitar case of digging equipment. The probe had already been used, what remained were shovels of varying sizes. Lewis chose a modest spade.

With one knee down, he started to dig.

The group watched, but after digging about a foot deep, Lewis decided to stop.

“Nothing there,” he said. “Probably just a rock.”

He filled in the hole, and decided to call it for the day.

“We’ve been here over two hours probing. The only place that looked promising was that spot there, but again, didn’t hit anything,” he said.

“Hey, until the treasure’s found, everybody’s right. I’m not going to say I’m wrong until it’s found,” he added. The rest of the crew didn’t seem too put off either. It seems the treasure was the journey itself, as it were.

Rebecca Verdon and Keith Sommerstein, Joshua’s parents, told CTV the book has allowed them to rediscover the city while exploring it with their children looking for clues.

“Its honestly just a cool way to walk around and to see things with a different set of eyes,” said Verdon.

“Like, all of the sudden you discover things that you didn’t know were around you even though you’ve passed that street several times.”

Responding to questions on whether he felt disappointed, Jeff Sommerstein said he was not.

“No, because its been so long that we’d been looking, and we always know that it might be the next time that we find it,” he said. “Maybe next time we’ll go to Westmount.”

“I mean, we didn’t find anything,” said Sommerstein junior, “but I did play a lot with the dogs. So, I’m still happy.”