At the end of August, Fitbit unveiled its revamped Charge 5 fitness tracker. Since then, I’ve had the chance to test the redesigned tracker for a couple of weeks, and so far it’s one of my favorites the company has released.

The Charge 5 has several significant changes both external and internal. On the surface is a whole new design that borrows a lot from Fitbit’s recently launched Luxe tracker. Inside, the Charge 5 now offers electrodermal activity (EDA) and electrocardiogram (ECG) apps, just like the Fitbit Sense smartwatch.

“… I will say that I prefer the Luxe to the Charge 5, but the new Charge is still a significant improvement over the Charge 3/4.”

However, while the Charge 5 is good, it’s not perfect. I experienced a few issues with some of my review unit’s features, but nothing that I consider to be a deal breaker for most people. The worst bug I found was a problem with the alarm. I’m a serial sleeper, but the Charge 5 has made an effort to break that habit by simply not stopping the alarm when I hit the snooze button.

Let’s start with the most notable change: the new design. The Charge 5 features a significantly improved look compared to previous charge trackers. It’s a welcome change, especially compared to the Charge 3 and 4, which kept the same design.

Rather than looking cool, the Charge 5 looks a lot more modern. When I tested the Charge 3 and 4, I felt like I had a nasty tech bundle strapped to my wrist. The Charge 5, on the other hand, offers a sleek and subtle aesthetic. It’s not blatantly technical like other trackers, and I felt like I could get away with wearing it on a fancy occasion with the right strap.

Appearance wise, I will say that I prefer the Luxe to the Charge 5, but the new Charge is still a significant improvement over the Charge 3/4. 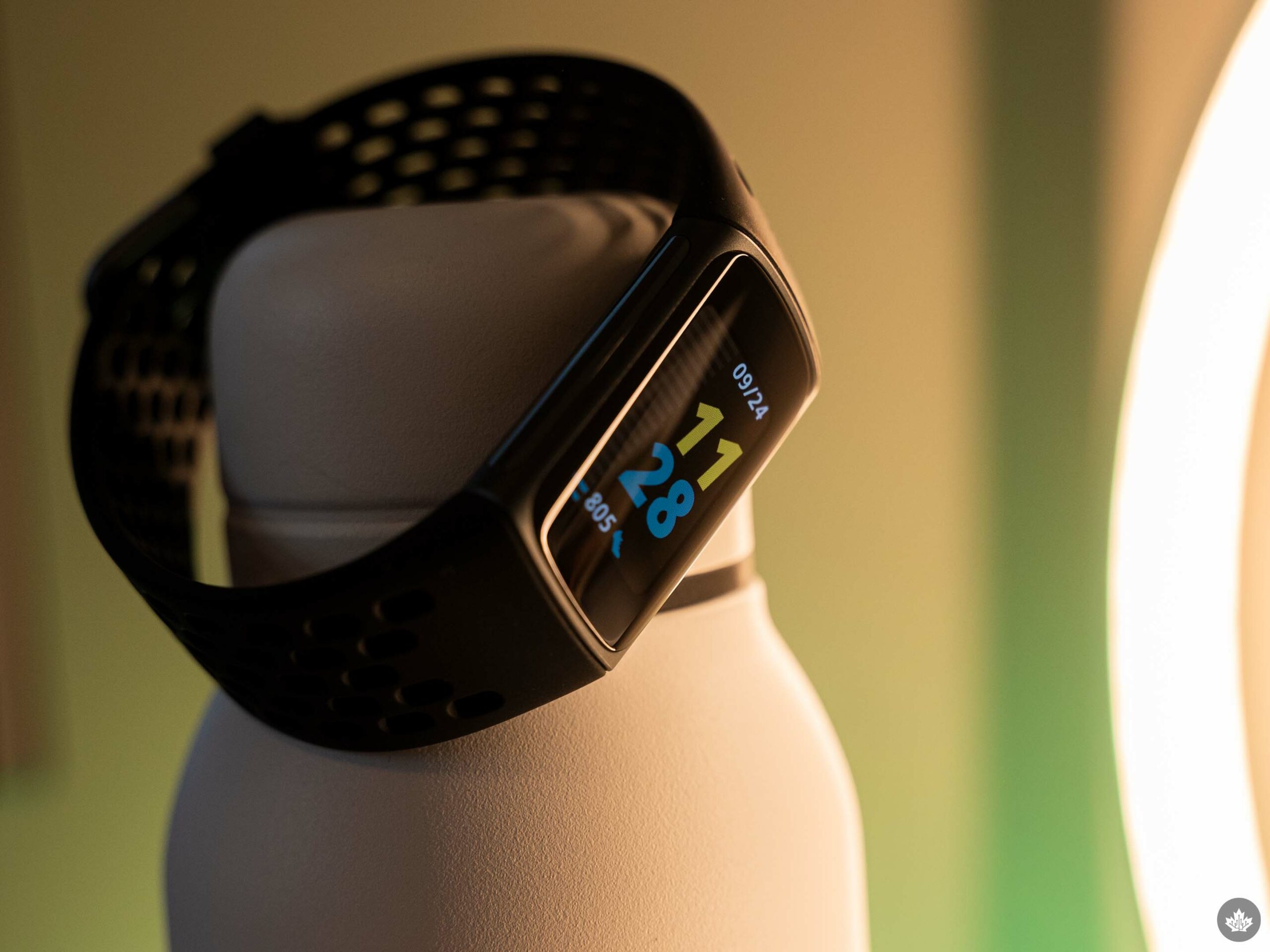 The other important new visual feature of the Charge 5 is its excellent new color AMOLED display. It’s a big step up from the boring monochrome OLED panel of previous versions of the tracker.

Unfortunately, the color screen doesn’t add much to the Charge experience beyond looking better. That’s not necessarily a bad thing, although I think Fitbit could have put together some nicer watch options to highlight the feature.

The default face, ‘Continuum’, does a pretty solid job of displaying the Charge 5 display thanks to the series of lines on the left side of the face. The lines show the progress of various health metrics, such as steps taken or activities completed. As the lines fill in, the color changes from blue to yellow.

However, other watch face options available in the Fitbit app have less colorful elements on the screen. Most choose one or two main colors for the watch face or for a health metric, and that’s it. It’s a minor complaint, but I’d love to see Fitbit offer more stylish and colorful watch face options in the future. 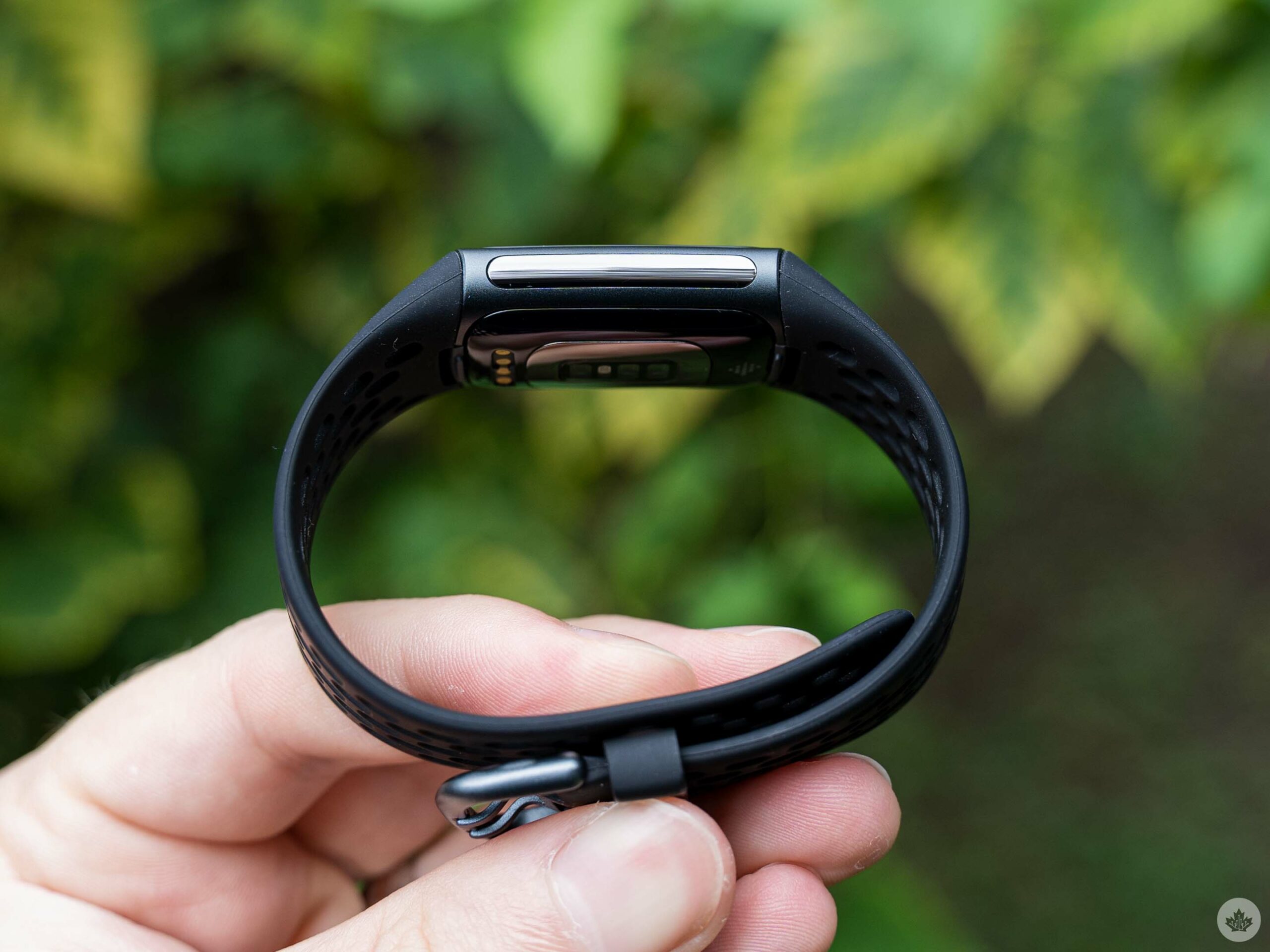 As much as I like the design and display of the new Charge 5, unfortunately it has the same navigation issues as the Fitbit Luxe. Like the Luxe, the Charge 5 eliminates the inductive side button seen on previous charging devices. Although, at least the Charge 5 replaces the side button with the electric sensors for the EDA scan app, instead of putting anything like the Luxe.

I was never a big fan of the button, but it did provide a convenient way to navigate the device (pressing it would take you back to the previous screen). Without the button, Fitbit offers new swipe-based navigation. Users can slide the screen up, down, left or right to move between different screens. It works, but it doesn’t feel good on such a small screen.

“As with the Sense, I did not find the EDA particularly useful.”

Fitbit also added a double tap gesture that takes you to the main watch screen. Again, this works, but it doesn’t feel right. Also, there were a few times when double tap activated whatever option was on the screen instead of going back.

Again, a minor issue, but I am concerned that some people may have issues. This is especially true for people who hail from older Fitbit trackers that had the button or less tech-savvy people. 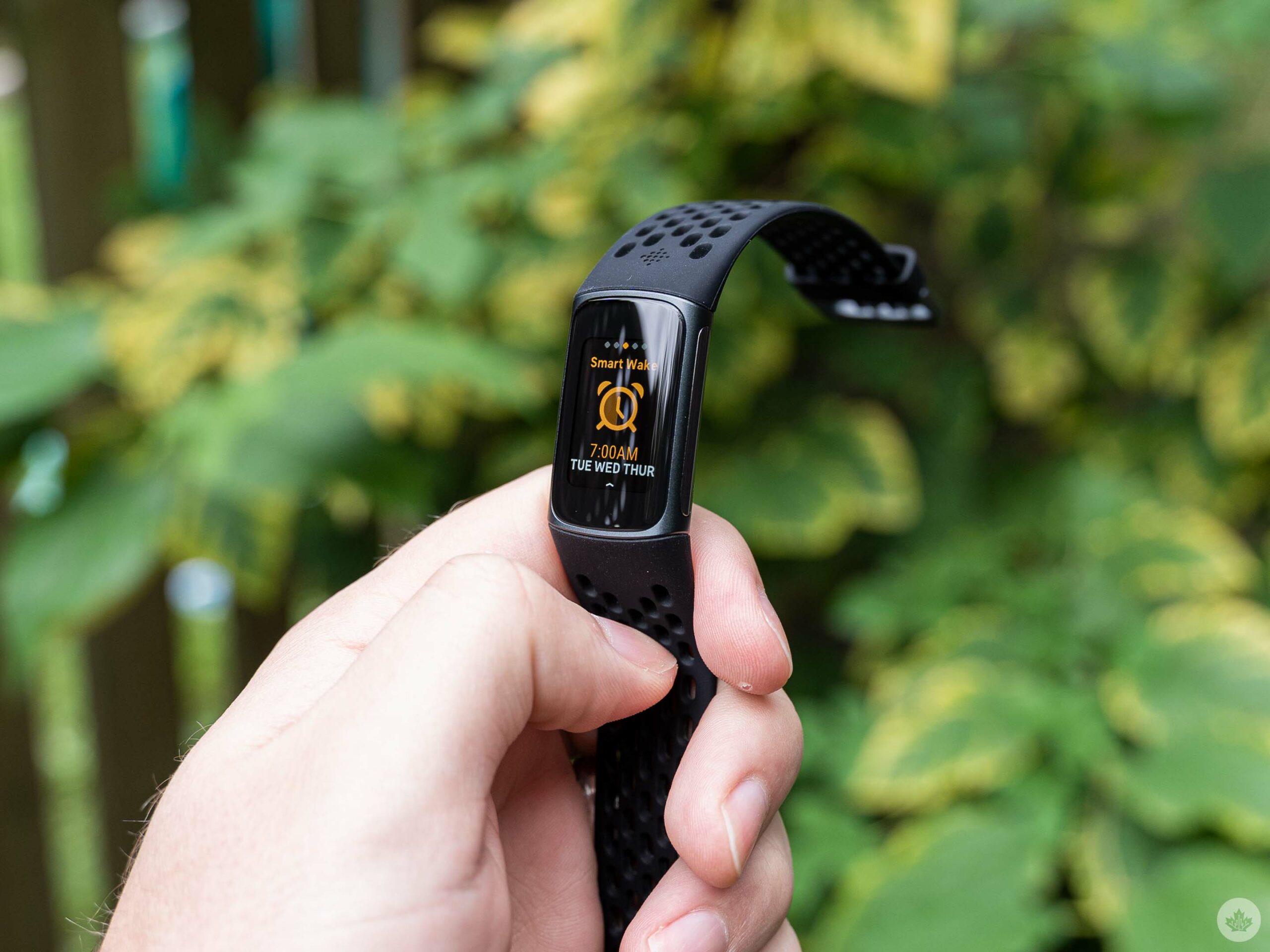 As mentioned above, the updated design of the Charge 5 paved the way for new internals such as EDA and ECG scanning applications. EDA specifically requires two metal strips, one on each side of the tracker.

Charge 5 users can access EDA scans by swiping from the watch face to the EDA scan page (on my Charge 5, that’s one swipe left or five swipe right). Once on the EDA screen, users can tap to initiate a scan, which involves holding the Charge 5 with their thumb on one metal strip and index finger on the other. The Charge 5 guides users through the process step by step.

If you’ve had a chance to try the EDA scan on the Fitbit Sense smartwatch, the experience is very similar here (although the Sense allows you to do shorter one-minute scans compared to the three-minute scan on the Charge 5) . You effectively hold the tracker for the duration of the scan and focus on your breathing, then the tracker gives you feedback on your responses to stress and allows you to record how you feel. All data is sent to the Fitbit app on your phone for later review.

As with Sense, I didn’t find the EDA particularly helpful. Maybe it’s because I’m a relatively laid-back person, but I rarely register a large number of stress responses. It was also weird that taking the time to do an EDA scan was helpful. Still, if you’re a stressed person, access to EDA scanning might be a welcome feature. 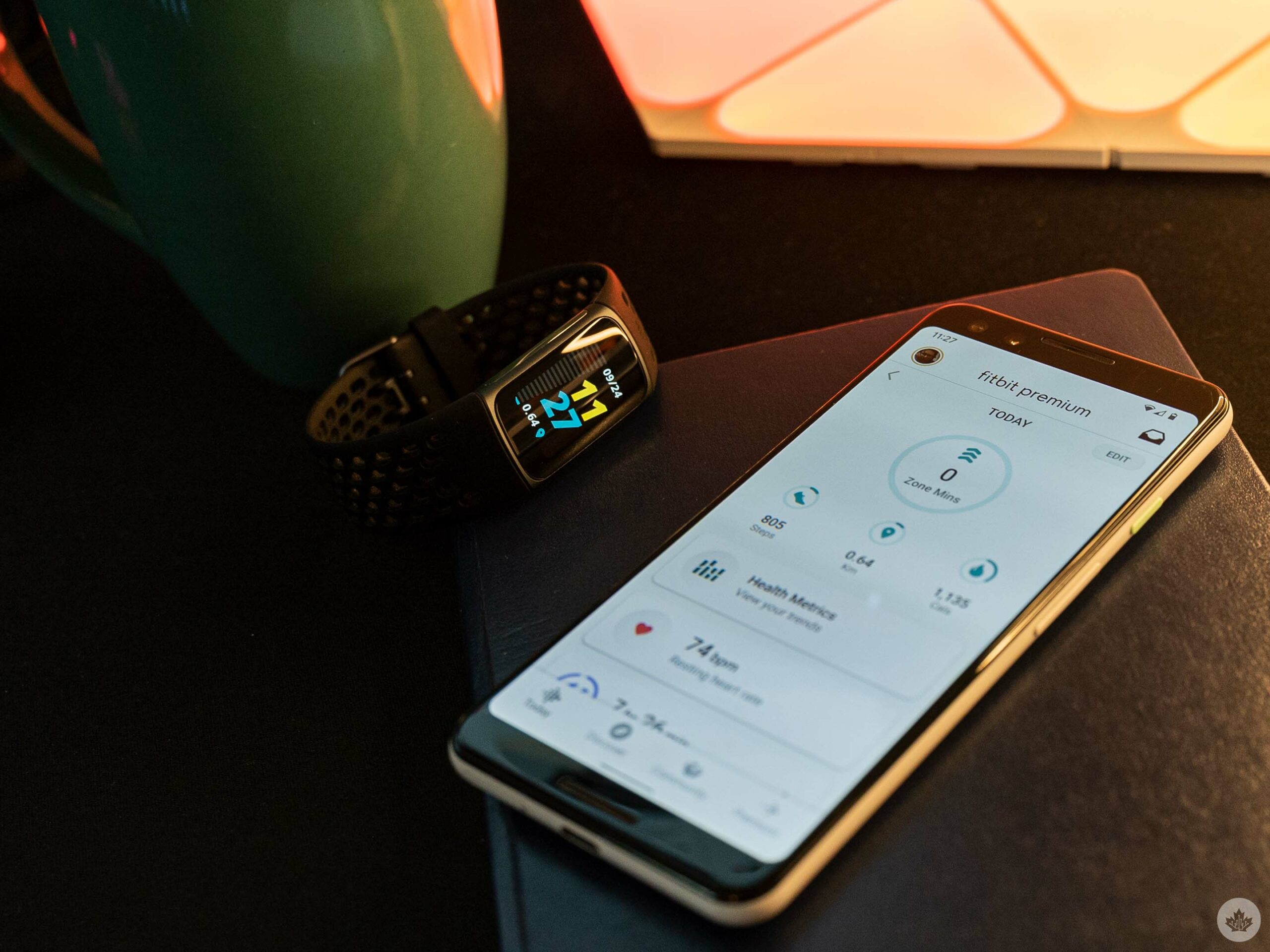 Unfortunately, the other major new features that Fitbit touted, ECG and Daily Preparation, were not available at the time of writing this review. Both features are scheduled to ‘come soon’ to Charge 5. The ECG is now available on the Sense, and I’m sure it will work similarly on the Charge 5, while the Daily Prep will hit the Charge 5, Sense, Versa 3 and 2, Luxe and Inspire 2 devices in a future update.

As usual, I recommend not buying a product based on the promise of future features. If you’re interested in daily prep or ECG capabilities, at least wait for them to arrive before pulling the trigger on the Charge 5. 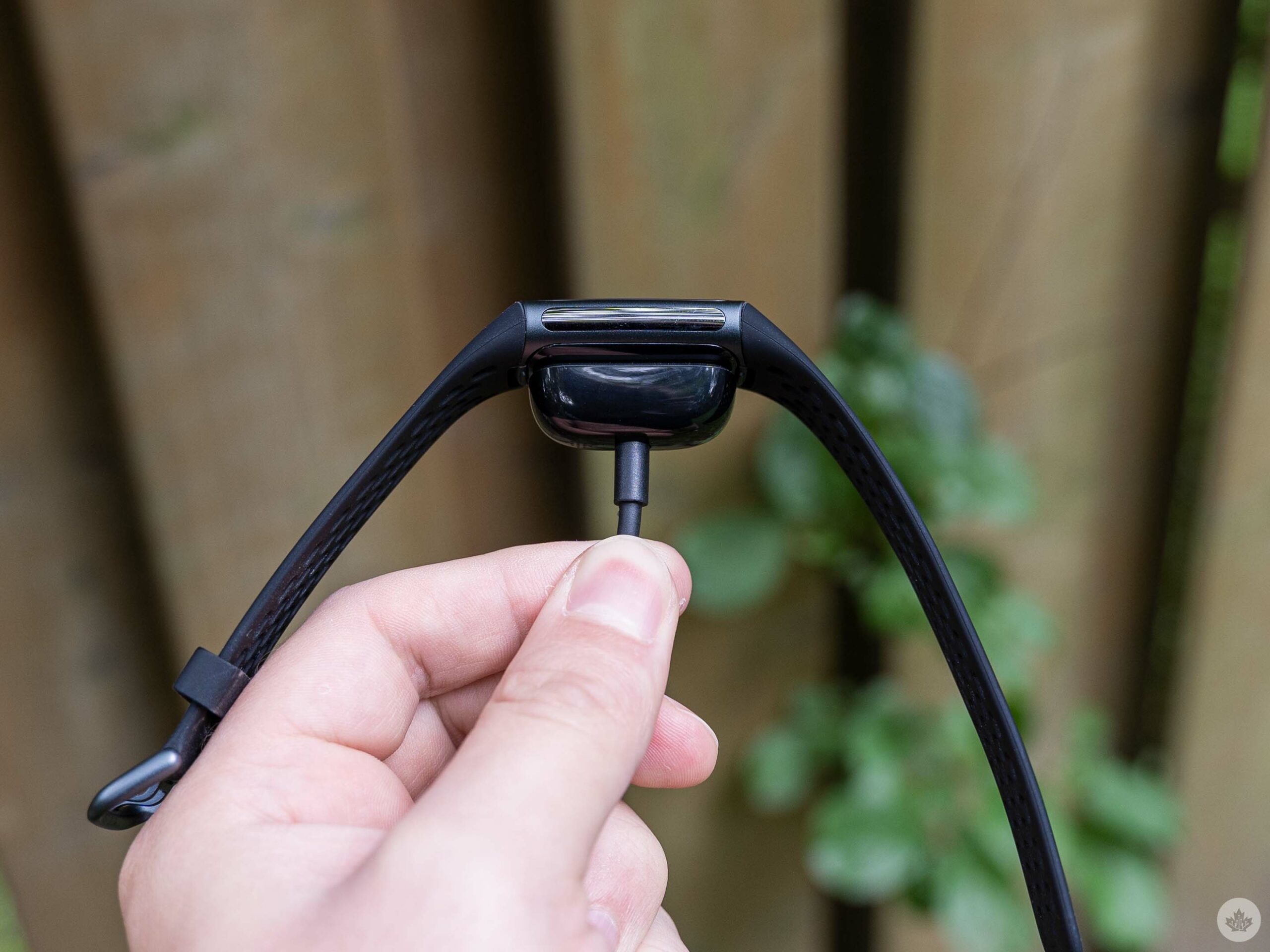 I’ve also been impressed by the battery life so far on the Charge 5. I completed a full charge on the tracker when I first set it up on September 9, and in the two weeks since then, I only had to recharge once. As I write this, the Charge 5 has 39 percent battery, which will get me through at least one more day, if not more.

“The only thing I missed about the Sense on the physical side was the altimeter for stair tracking.”

However, I will point out that using GPS features can significantly affect battery life. If you are the type of person who uses GPS capabilities frequently, you probably won’t get the full seven days of Charge 5 battery.

And when it comes time to charge the Charge 5, you no longer need the silly plastic clip used by previous models. Like the Luxe, the Charge 5 connects to the charger using magnets. I do it with the magnets that were a bit stronger as it’s easy to get the Charge 5 out of the charging jack, but I’ll still take care of that awful clip-on charger. 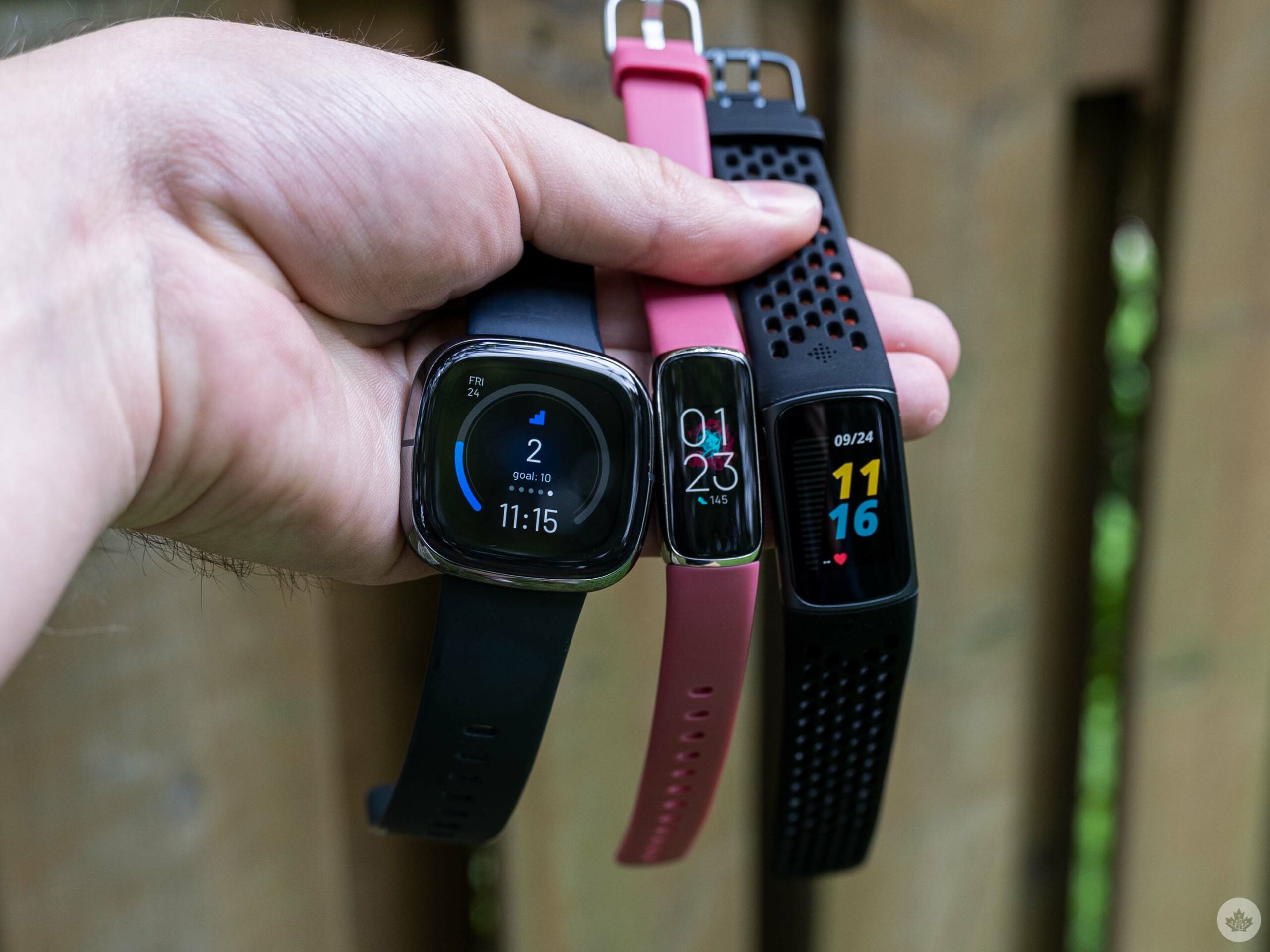 Whether or not the Charge 5 will work for you comes down to what you want from the technology on your wrist. Coming from the Fitbit Sense smartwatch, I found that I didn’t miss out on some of the more advanced smart features like the Google Assistant on the wrist or calls. Frankly, I didn’t feel the need to use any of those things, and I appreciated the extra battery I got in the Charge 5 compared to the Sense.

At the same time, if any of those clever features is something you value, the Charge 5 is probably not the right choice for you. The only thing I missed about the Sense on the physical side was the altimeter for stair tracking. However, that also goes the other way around, as the Charge 5 only offers built-in GPS as an advantage over the slightly less expensive Fitbit Luxe.

In other words, I’d break down Fitbit’s current offerings as follows: If you want the latest in fitness tracking and smart features, the Sense is the best option (and also the most expensive in the world). $ 399.95). Alternatively, you could consider the Versa 3 or 2. I’m not familiar enough with either watch to advocate for them, but I think if I were to spend the extra money for a Fitbit smartwatch, I would go for the more expensive Sense. to make sure I get everything the company has to offer.