President Vladimir Putin earlier declared the Azov Sea port city of Mariupol “liberated” after nearly two months of siege and shelling, despite the fact that hundreds of defenders remained in hiding inside the giant Azovstal steel plant. .

After that, a photo collage showing a man replacing the Ukrainian flag with the Soviet Union flag went viral with the claim that these photos were taken at the Ilyich Iron and Steel Works plant in Mariupol.

A lots of Facebook users shared this collage with the claim: “The red flag changed the Ukrainian flag over the Ilyich plant in Mariupol.”

The claim added: “Before, the flag of Ukraine hung there, which was thrown down. On April 15, the complete liberation of the Ukrainian nationalists from the Ilyich metallurgical combine, named after the Ukrainian nationalists in Mariupol, was announced. According to the official representative of the Ministry of Defense of the Russian Federation, Major General Igor Konashenko, as a result of aggressive actions, the company was completely liberated by the group of the Russian Armed Forces and units of the DPR National Police. .

The India Today Anti Fake News War Room (AFWA) found that the footage was at least seven years old and was not from the Russian invasion of Ukraine in 2022.

Reverse search of the images led us to the Twitter account of Visegrad 24 who shared the collage on April 18 but wrote: “This is what the occupation forces did in Debaltseve in 2015 after taking control of the city in the Battle of Debaltseve, the final act of large-scale fighting before force Ukraine to sign the Minsk 2 pacts.”

Further searches led us to a video uploaded to a YouTube channel called ghost brigade on March 3, 2015. The photos appeared to be screenshots from that video.

In another YouTube video, uploaded on March 4, 2015 to the VOXKOMM International channel, we find the same frames. The caption read: “Raising the Soviet flag in Donbas.”

Battle of Debaltseve and Phantom Brigade

Debaltseve or Debaltsevo is a city in the Donetsk Oblast of Ukraine.

This channel also referenced the YouTube video uploaded by the “Ghost Brigade” as the original source of the video.

The Guardian reported in February 2015 that thousands of government troops withdrew from Debaltseve following a strategic victory by pro-Russian forces against Ukraine. The report says that at least 22 Ukrainian soldiers were killed and more than 150 wounded in Debaltseve at the time.

We were unable to independently verify the exact location of the viral images. However, because these photos have been on the internet since at least 2015, we concluded that they were not from the recent battle in Mariupol, Ukraine. 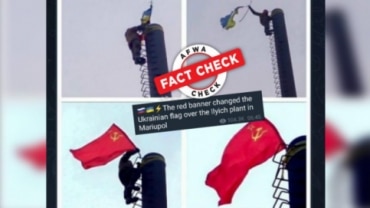 SayThe photos show the replacement of the Ukrainian flag with a flag of the Soviet Union at the Ilyich Iron and Steel Works plant in Mariupol after its “liberation”.conclusionThese images are at least seven years old. Videos showing the same frames on the replaced flag claim this was from the 2015 Battle of Debaltseve, where Ukraine suffered a strategic defeat.

The number of ravens determines the intensity of the lie.