After his arrest a few days ago, now there are unpublished videos of Emma Coronel, wife of Mexican drug lord Joaquín ‘El Chapo’ Guzmán Loera, in which it is seen how he learns to shoot large caliber firearms, according to information published by the news portal of Telemundo.

In some videos, the model is seen holding weapons of different caliber, while receiving instructions on how to handle a pistol.

In the first footage, Emma Coronel is seen in a closed shooting range, while holding what appears to be a “goat’s horn” in yellow and black, while learning to shoot at a target.

In the second video, he is seen at an outdoor shooting range, holding a handgun and a man giving him instructions on what to do.

On her official Instagram account @therealemmacoronel, in the tagged photos section, a woman posted a photo of the first video.

In both audiovisual materials, the wife of ‘Chapo’ Guzmán appears in black outfits, tight and without losing that glamor that has characterized her.

Even Emma Coronel, who learns to shoot, can be seen to see the sexy top that she wears and that reveals her enormous frontal attributes.

In the second material, the man who trains her is heard saying: “What should be done? Take off the magazine, ”says a man who explains step by step what to do with the handgun.

As the videos leaked on Telemundo’s website and YouTube, many people began to criticize the actions of Emma Coronel, wife of Joaquín “El Chapo” Guzmán, who learns to shoot firearms of different caliber.

One of the Internet users wrote: “Now since she is detained, everything is attributed to her when here it is normal to go to the places assigned to shoot.”

Someone else tried to defend her for this and said: “There is nothing wrong with learning to shoot, nowadays many people do it and it is not criminal for that reason.”

“What a great thing! Here in the US many women learn to shoot a pistol! ”,“ What are you learning to shoot for? To be more bandit! ”,“ Poor girl now they are going to take all the dirty clothes out of the sun ”, more people said.

Even other Internet users alluded to some phrases used in memes to defend it: “And what has it. And what has. And what do you have. Here in some states of the USA it is legal even to carry arms ”.

One person even said that she also needed some classes: “I want to learn, they have robbed my house twice and the police never came, she will be able to defend herself.” 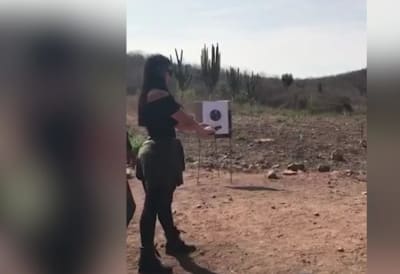 A US judge on Tuesday ordered Emma Coronel, the wife of Mexican drug lord Joaquín “El Chapo” Guzmán, to remain in custody awaiting trial after being charged with drug trafficking and helping her husband escape from prison in 2015.

Coronel, a 31-year-old former beauty queen, appeared by videoconference before a Washington city judge. The woman faces charges of conspiring to distribute cocaine, heroin, methamphetamine and marijuana in the United States.