Elvis Presley may have died 45 years ago, but his legacy lives on as one of the greatest pop culture icons of the 20th century. Many are still fascinated by the King of Rock ‘n’ Roll. A new movie, called Elvis, was released this summer, starring Austin Butler as Elvis and Tom Hanks as his scheming manager, Colonel Tom Parker. And, this month marks the 45th anniversary of Elvis’s death. Graceland, his former home, will celebrate with exhibits, concerts, giveaways and other events. Between the anniversary and pent-up demand from the pandemic, Graceland management is expecting a big turnout for the nine-day Elvis Week in August.

On August 16, 1977, Presley was found dead at his Graceland mansion in Memphis. He was 42 years old. He began his singing career in 1954 and quickly became an international sensation. His hits included Blue Suede Shoes, Love Me Tender, Heartbreak Hotel and Return to Sender. He also starred in 33 movies. Here is a collection of archived pages and articles that the Calgary Herald published after Elvis’s death. 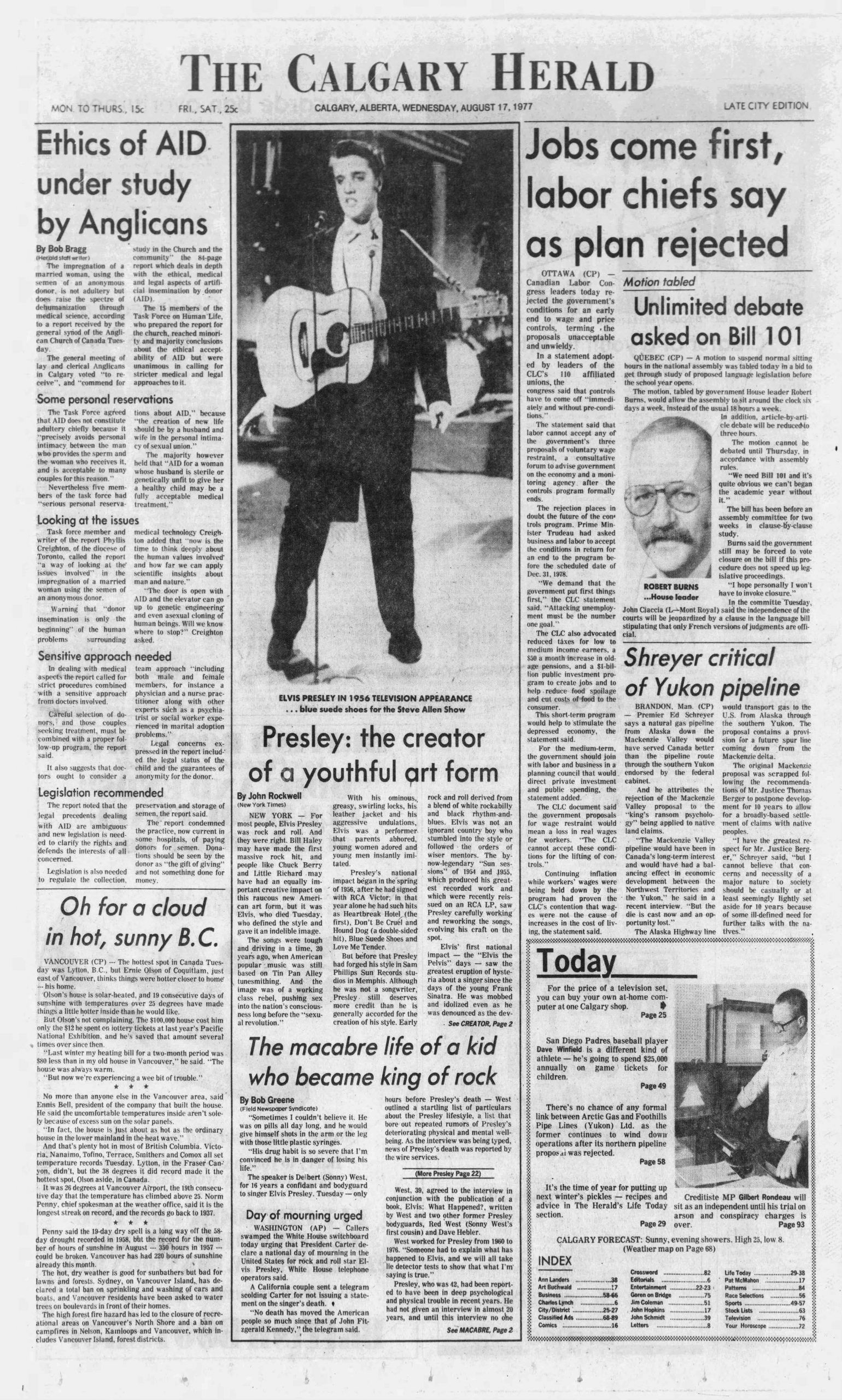 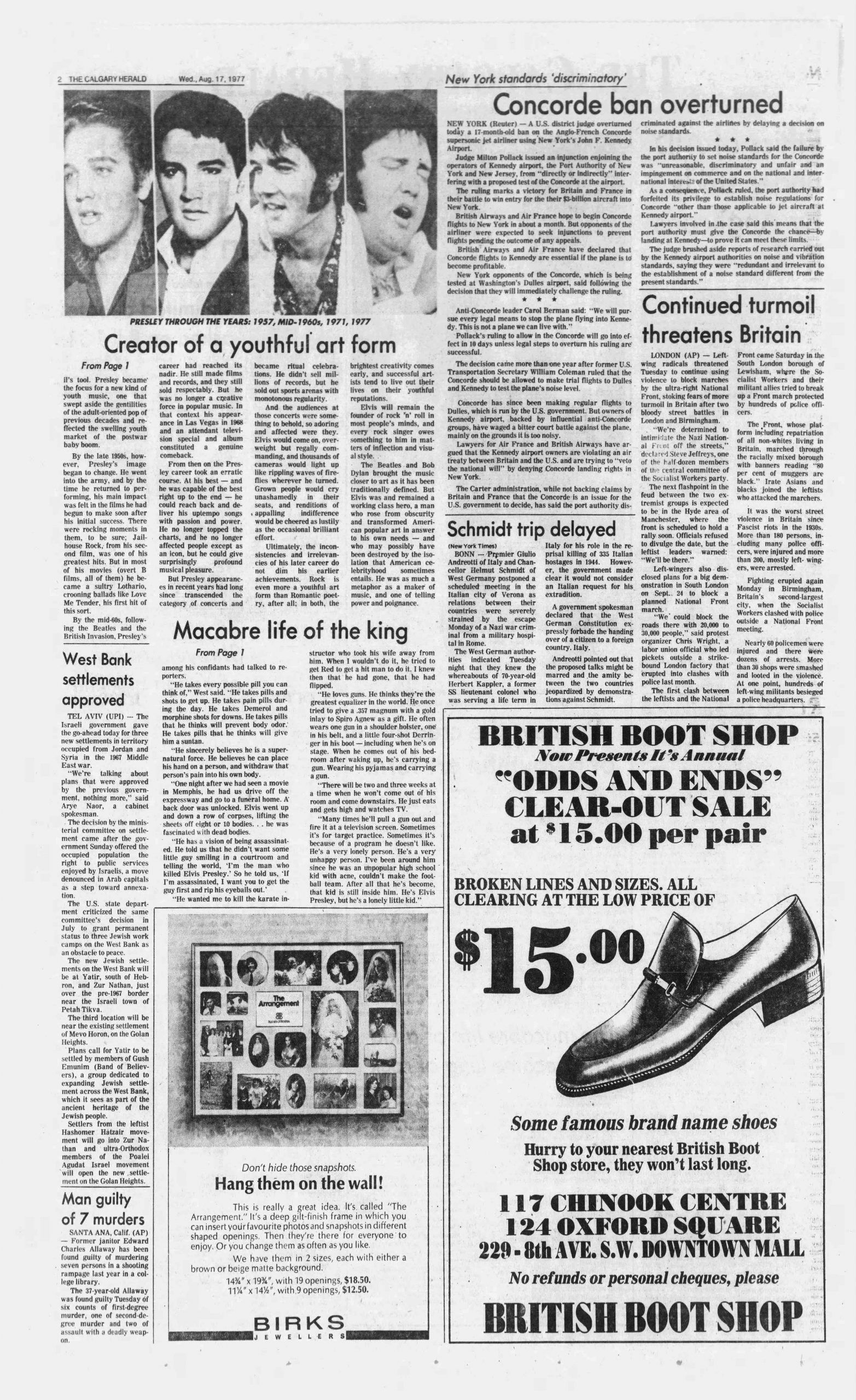 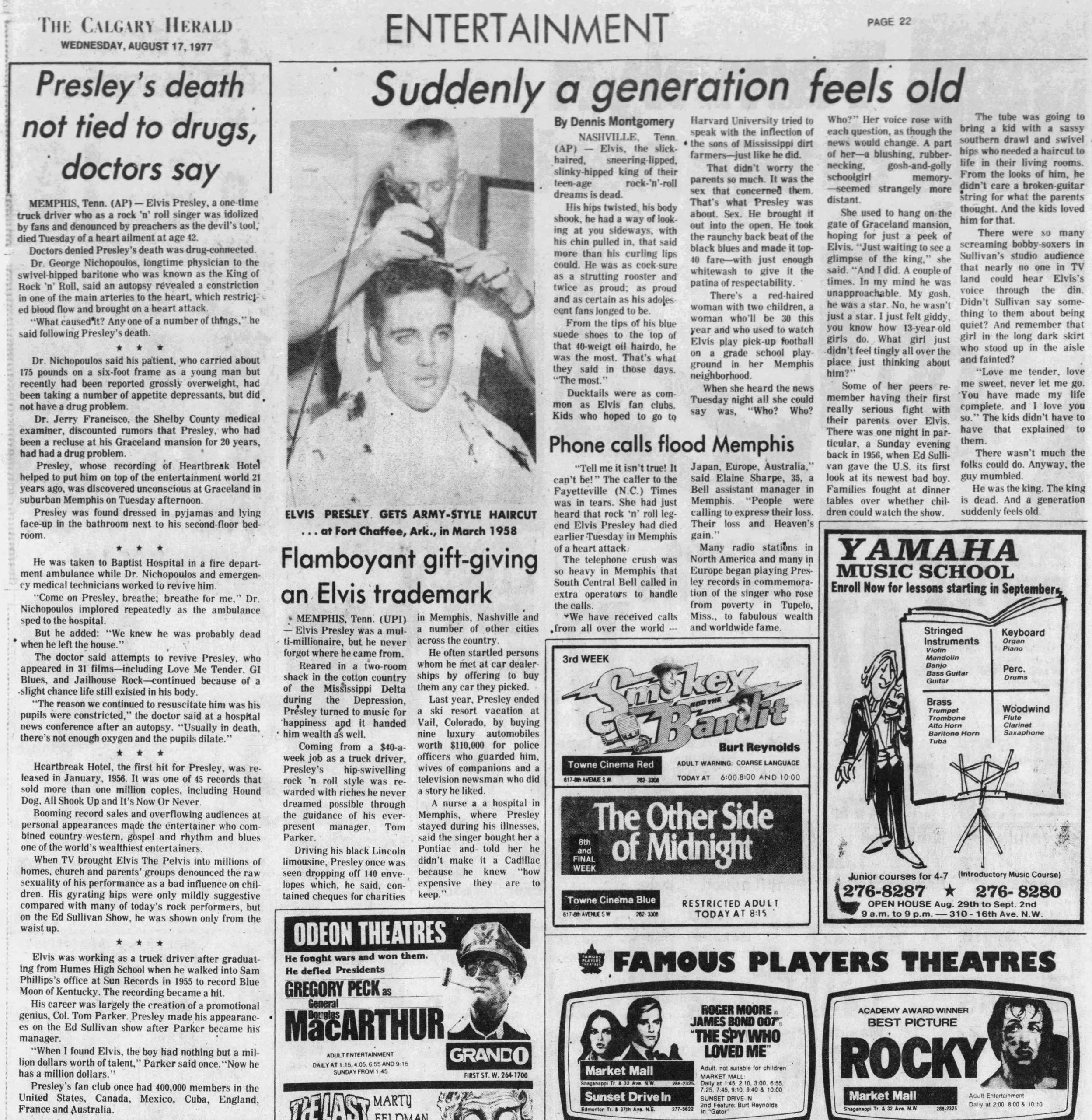 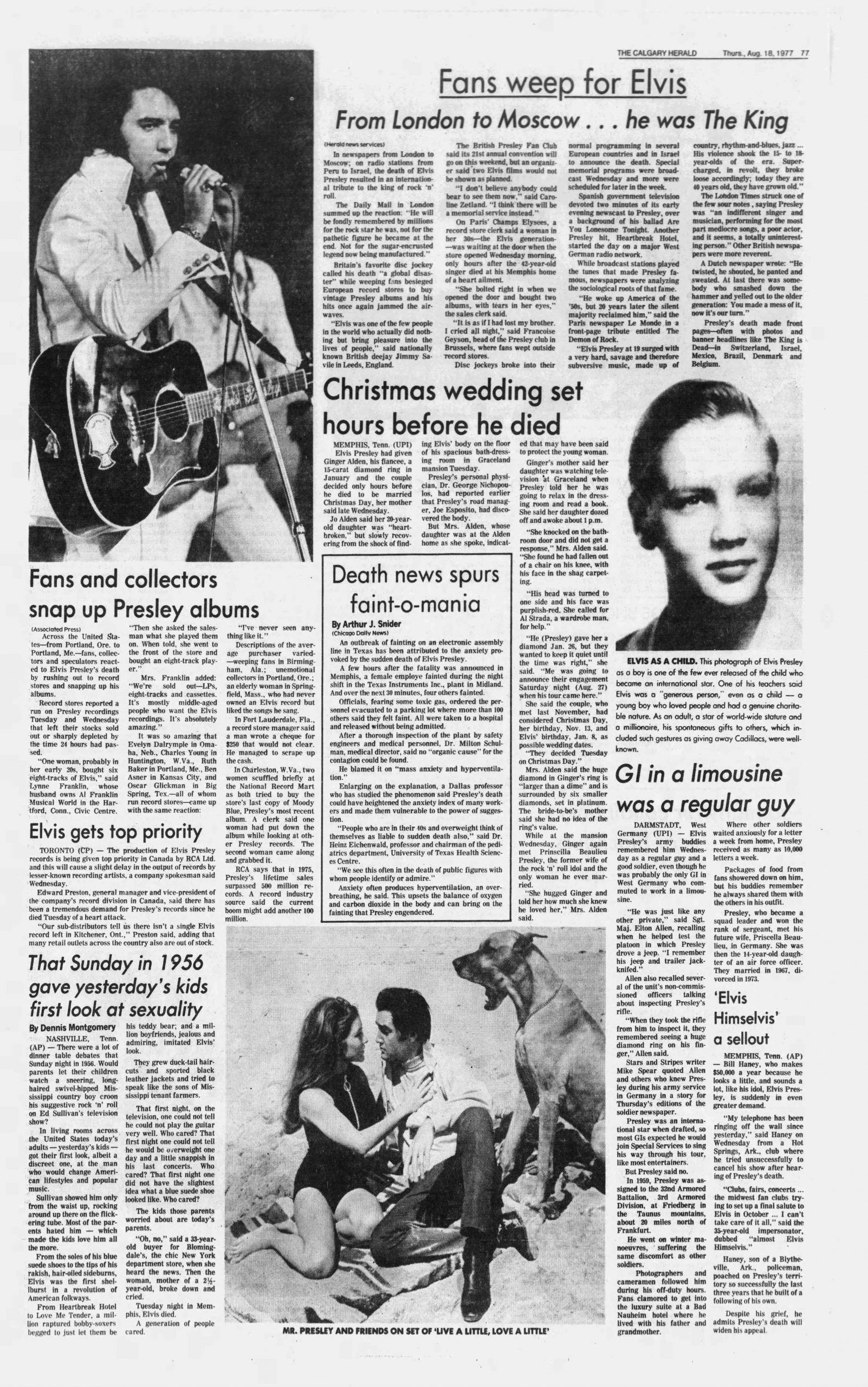 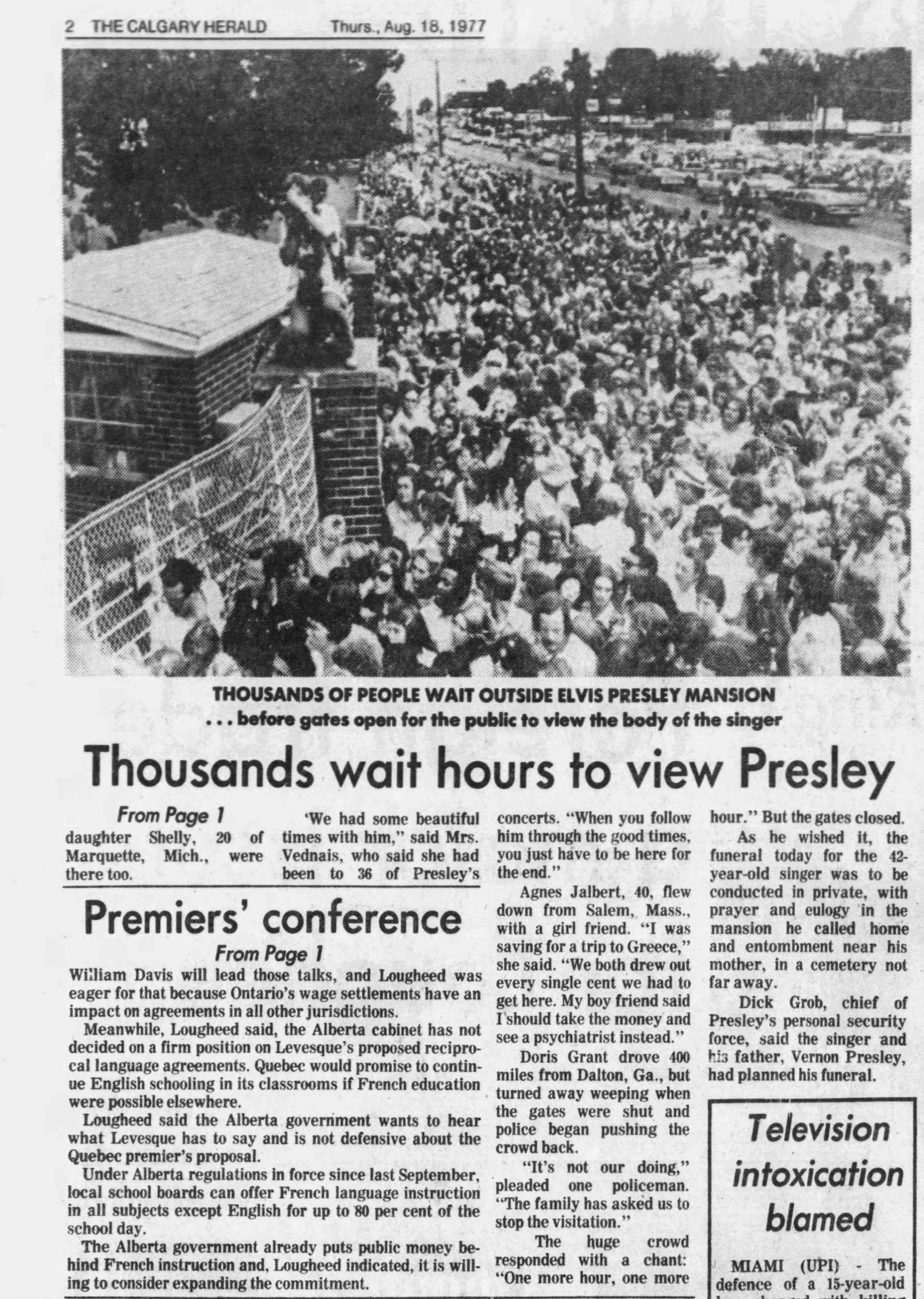 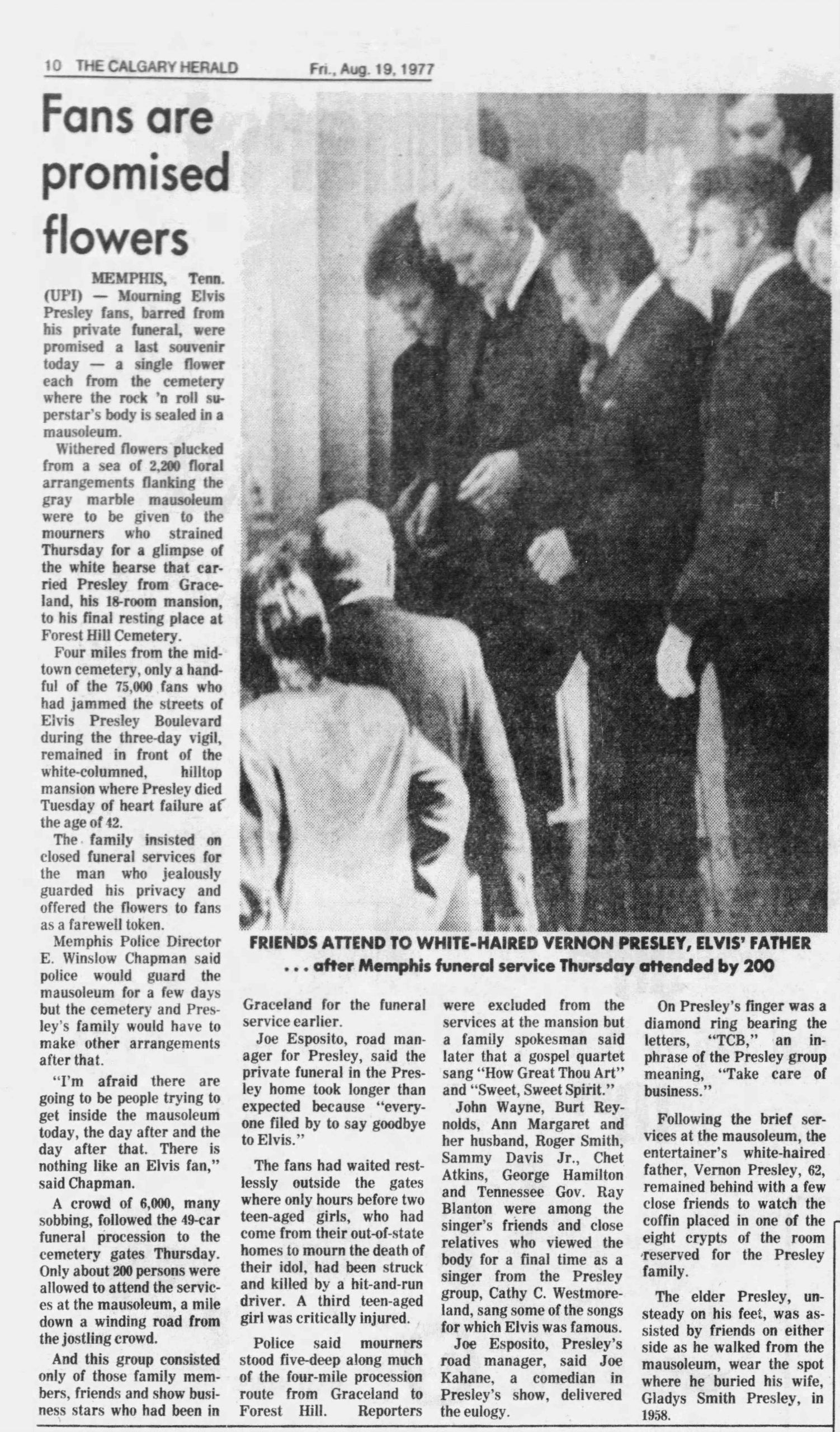 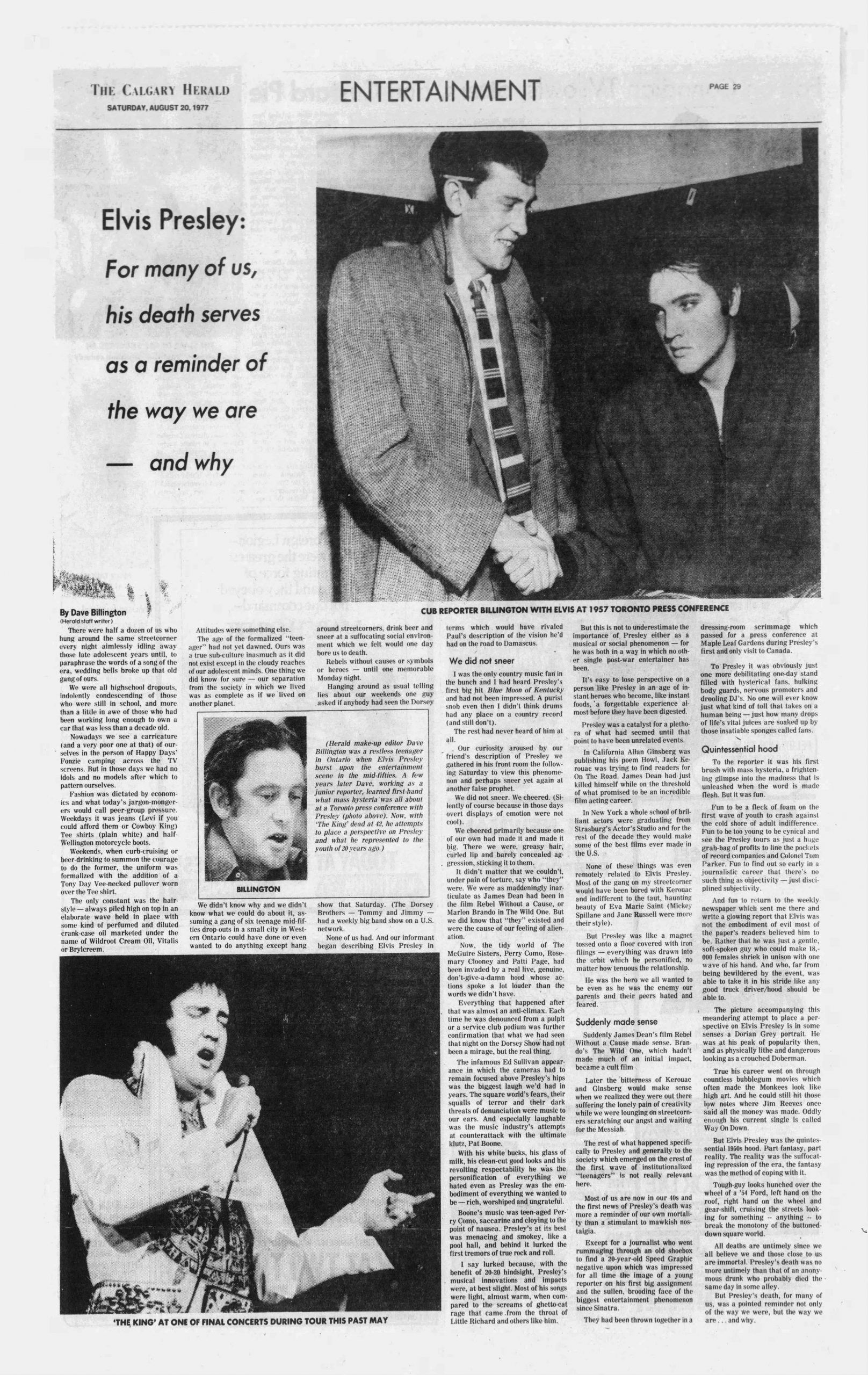 Also up for auction this month is a special collection of jewelry that Elvis gave to Colonel Tom Parker. Reuters prepared this article about the auction.

WEST HOLLYWOOD (AP) — Elvis Presley experts and historians have long known about a collection of jewelry the singer gave to his manager, Colonel Tom Parker.

Collectors and fans alike have spent decades searching for items thought to be lost. Thanks to Brigitte Kruse, founder and CEO of GWS Auctions, who found and assembled the pieces, they can now be seen together for the first time.

Two hundred items, including jewel-encrusted gold rings, cufflinks, watches and chains, will go up for auction on August 27. Also included is the guitar that Presley played during his famous 1968 “comeback” television special.

Presley’s ex-wife, Priscilla, worked with Kruse on the collection, although Priscilla does not own any of the pieces.

“Well, it sure brings back memories,” Priscilla Presley told Reuters.

She added that it was a running joke with her ex-husband who was constantly buying or ordering jewelry for Parker because the manager already had everything he needed and the Presleys didn’t know what else to buy him.

Priscilla Presley said she felt protective of the items because she designed some of them, including artifacts bearing the logo of the TCB Band, the musicians who formed the core rhythm section of Presley’s backing band in his later years. “TCB” stood for “take care of business,” a favorite expression of Presley’s.

Priscilla Presley supported the auction in part because she was tired of seeing so many fake Elvis artifacts for sale.

“There are so many products out there that are not authentic at all and that worries me,” he said.

“I want to know for sure that it will go to someone who will take care of him, will love him.”

Sign up for daily headline news from the Calgary Herald, a division of Postmedia Network Inc.

By clicking the sign up button, you agree to receive the above newsletter from Postmedia Network Inc. You can unsubscribe at any time by clicking the unsubscribe link at the bottom of our emails. Red Postmedia Inc. | 365 Bloor Street East, Toronto, Ontario, M4W 3L4 | 416-383-2300

A welcome email is on the way. If you don’t see it, check your spam folder.

The next issue of the Calgary Herald Headline News will be in your inbox soon.

We encountered a problem registering you. Try again