Orillia OPP is investigating after several election signs in Simcoe North were defaced.

On Monday, Green Party candidate Krystal Brooks said someone vandalized the election signs on her front lawn with a racist message.

“On the one side, it said ‘Go back to the reserve with a… a name,'” she described. 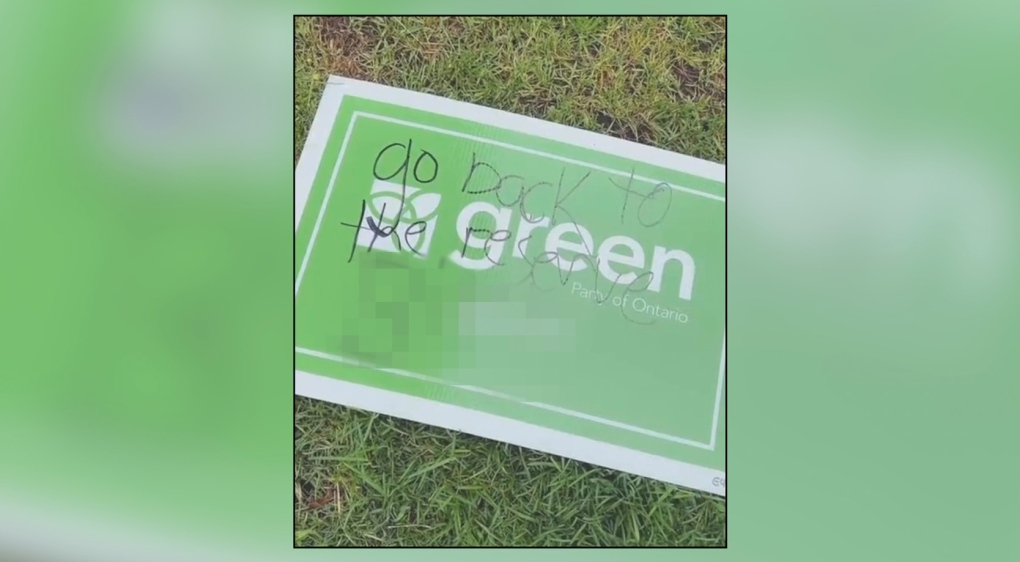 Brooks, who is from Rama First Nation, said she quickly removed the signs to protect her children.

“I’m just really grateful none of my kids saw it.”

The Orillia resident took to social media, sharing her experience and the challenges she and other BIPOC women face in an election.

in the minute-long videoBrooks showed images of the signs and wrote, “Politics have never welcomed us with open arms” before saying, “I know what I signed up for and that this stuff happens and can be expected.”

Mike Schreiner, leader of the Ontario Green Party, told CTV News that the racist attack on Brooks was unacceptable, adding that it had become a trend for minority women in politics.

“I’m just hurt for Krystal to have to deal with that kind of anti-Indigenous racism and misogynistic hate. It’s just wrong,” said Schreiner.

Meanwhile, police ask anyone with information to come forward.

“The Orillia OPP strongly believes that hate has no place in our community, and as such, we will continue to investigate,” said Const. Brett Boniface.

According to police, there have been two separate incidents involving election signs in recent days.

Ontario Liberal candidate Aaron Cayden Hiltz told CTV News that about a dozen of his signs had been damaged during the campaign, but a recent incident hit close to home.

He said someone destroyed the election signs on his front lawn, and the person(s) didn’t stop there. He said there was additional damage to his property from him.

“I expected this to a certain degree, but I live here in Orillia with my partner, and she didn’t sign up for any of this,” said Cayden Hiltz.

“To have her ask me, ‘Is this the type of work you want to go into? Is this going to happen to us consistently?’ To answer those questions really hurt.”

While the recent events have been challenging, Cayden Hiltz said that he’s saddened that Brooks has had to endure vandalism and racist attacks during the race.

Despite the situation, Brooks said it wouldn’t slow her momentum as she prepares for the final stretch of the election race.

She said the incident brought unity to the riding.

“The outpouring of love and support is just phenomenal,” said Brooks, adding that each Simcoe North candidate reached out to her following the attack to offer support.