Emergency crews in Nova Scotia’s Yarmouth County are currently battling a wildfire that is estimated to be 200 hectares in size.

The Department of Natural Resources first tweeted about the fire at 10:20 pm Monday. At the time, it said crews were responding to a wildfire about two kilometers west of South Horseshoe Lake, and that the fire was estimated to be about 50 hectares.

Tuesday morning, DNR said two helicopters and 12 DNR crew members had returned to battle the fire, and that winds and low humidity were causing it to spread.

According to the latest update from DNR, just before 2:30 pm Tuesday, the fire near Horseshoe Lake has grown to 200 hectares and is 10 per cent contained. Crews from Shelburne and Yarmouth and two helicopters remain on scene.

Video taken near the fire Monday night and submitted to CTV News shows thick, dark clouds of smoke lingering over the area.

No burning is allowed in Queens, Shelburne or Yarmouth counties.

An easterly wind will continue to blow smoke from the wildfire towards Quinan and Yarmouth Tuesday afternoon and evening.

Wildfire near Horseshoe Lake in Yarmouth Co. is estimated to be 200ha in size and is 10% contained. Fire is moving fast because of strong winds and low humidity. Provincial crews from Shelburne and Yarmouth and two helicopters remain on scene. pic.twitter.com/p8OnNuDjIf

in the statementthe department cautions that people who are exposed to smoke, particularly those with respiratory conditions, may experience coughing, throat irritation, headaches or shortness of breath.

The wildfire has produced enough smoke that it is visible on some weather satellite imagery.

The fire has produced enough smoke that Kalin Mitchell has been able to see it on some weather satellite imagery in the CTV Atlantic Weather Center Tuesday. It shows here as grey.

CTV Atlantic Chief Meteorologist Kalin Mitchell says conditions are not favorable for combatting the wildfire Tuesday, as the wind will remain steady out of the east between 20 and 30 kilometers per hour into the evening. He says likes were between 30 and 50 kilometers per hour Tuesday afternoon.

“The air is also very dry in the Maritimes at the moment,” says Mitchell. “Relative humidity in the vicinity of the fire, and in general in the southwest of Nova Scotia, is only in the range of 20 to 30 per cent. Dew point temperatures — a measure of moisture in the air — are below zero, which again indicates the nature of the air in place for the region is generally dry. No precipitation is expected Tuesday afternoon, evening, or night.” 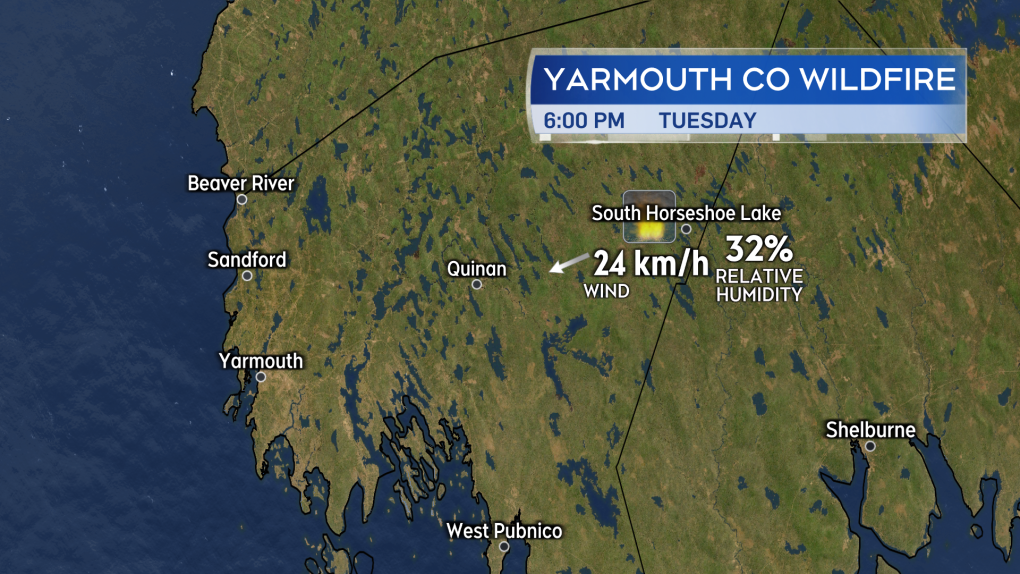 A blustery, east wind and dry conditions are forecast to persist into Tuesday evening.

Mitchell says there will be a slight improvement in conditions for fighting the fire in the forecast for Wednesday.

“Weather conditions will be mostly cloudy with the easterly wind forecast to ease into a range of 10 to 20 kilometers per hour,” he says. “Relative humidity is expected to rise into a range of 70 to 85 per cent.”

There is a 40 per cent chance of showers for the area through the day on Wednesday, though a significant amount of rain is not expected. 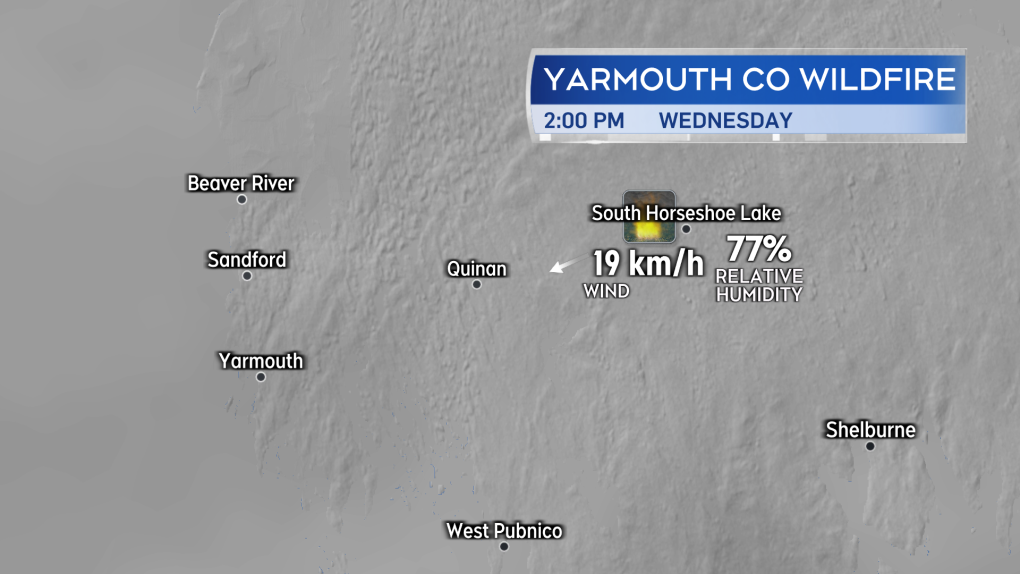 Some improvement for fire fighting conditions Wednesday. Cloudier with the wind easing by near 10 km/h. Relative humidity will increase and there is a low (40 per cent) chance of showers

Natural Resources and Renewables rates much of Nova Scotia as being in a moderate-to-high fire weather index.