Christopher Rodríguez was arrested in Texas for illegal trafficking, causing an accident that left several injured.

Rodríguez, 31, was detained by a highway patrol from the Texas Department of Public Safety (TxDPS, for its acronym in English), towards the southeast of the state in an area of ​​cattle ranches.

According to the legal documents of the case, consulted by MundoHispánico In Texas, on Friday, February 19, 2021, at 3:00 p.m., the TxDPS patrol car was making its normal patrol on I-59 east of Laredo.

Highway I-59 is a road that begins right in Laredo and runs parallel to the coast in front of the Gulf of Mexico, until it reaches the Houston metropolitan area and goes up to the city of Texarkana, almost with Arkansas.

Many human and drug traffickers use that highway to travel north because it is less guarded than I-35, the other interstate highway that leaves from Laredo heading north and goes up to Dallas.

The TxDPS highway patrolman noticed that the GMC Yukon truck had broken taillights and tried to stop it for a routine violation, so he turned on his hazard lights to warn him to stop.

However, the Hispanic driver of the GMC Yukon truck, instead of heeding the orders of the patrolman, sped up and tried to lose himself from the agent through a rural road.

The GMC Yukon driver veered off the I-59 main road and onto FM-2895 country road, speeding about five miles south.

The truck, according to the report of the TxDPS patrol, was heading towards the town of Aguilares.

The agent warned by radio that he was in pursuit of the truck and some police officers Border Patrol, stationed at a checkpoint in the town of Aguilares, they went out to meet the GMC Yukon.

However, the driver of the truck decided not to continue on rural highway FM-2895 and sped down a dirt road between a couple of cattle ranches.

At one point, the GMC Yukon driver sped up to try to escape the patrol car on the dirt road, but lost control of the vehicle and collided sideways into a wooden fence at one of the ranches. 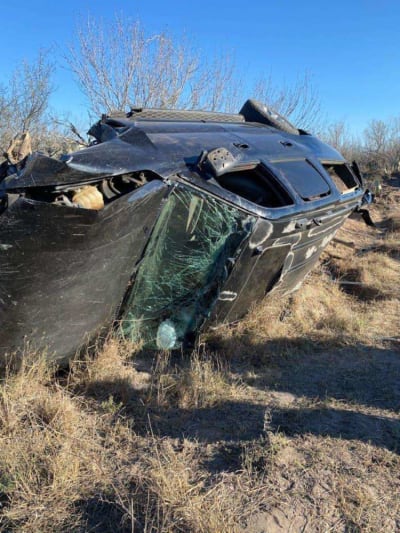 This is how the truck that Christopher Rodríguez was driving was left, in which he was hiding 12 illegal immigrants (PHOTO Texas Department of Public Safety)

As it hit the fence at full speed, the truck began to tumble uncontrollably and rolled to the side, according to testimony from the officer, who suddenly stopped to help people inside the vehicle.

Christopher Alberto Rodríguez, his full name, was arrested at the scene by the TxDPS officer who discovered that 12 people were traveling inside the GMC Yukon who were injured, with moderate to severe injuries, at the scene.

Border Patrol agents who arrived to assist the TxDPS agent discovered that the 12 injured were undocumented and had just crossed the border from Mexico into Texas hours earlier.

Of the 12 injured, according to the TxDPS document, five were transported by ambulance helicopter to various hospitals in southeast Texas to be treated for their severe injuries, with life-threatening blows to the head.

While Christopher Rodríguez was taken to the jail of the Webb County, in Laredo, to face criminal prosecution on 12 counts of human trafficking, evading arrest, causing an accident with dangerous injuries and reckless driving.