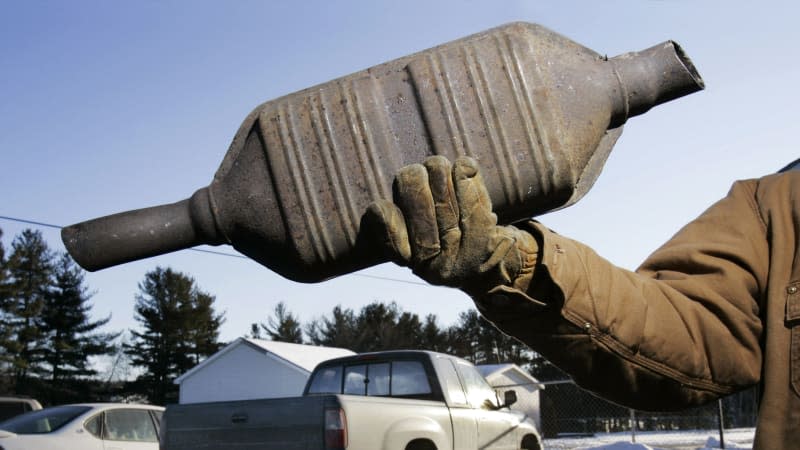 California’s Gov. Gavin Newsom announced Sunday that he had signed new bills into law to make the sale of stolen catalytic converters much more difficult. Theft of the emissions reduction equipment have spiked in the past couple of years, with thieves shamelessly stealing them out from under cars in driveways or in broad daylight.

The Los Angeles Times reports that the laws, Senate Bill 1087 proposed by state Sen. Lena Gonzalez (D-Long Beach), and Assembly Bill 1740 put forth by Assembly member Al Muratsuchi (D-Rolling Hills Estates), will force auto recyclers and used parts dealers to document where they are getting catalytic converters from. Thieves often will sell stolen “cats” to shops that might look the other way as to where the parts came from.

Car and Driver further reports that shops will have to keep mandated logs that include VINs or identification numbers etched into the catalytic converters themselves, contracts with sellers’ IDs, and traceable payment methods. Parts resellers that don’t keep logs will be subject to increasing fines, $1,000 for a first offense, $2,000 for a second, ramping up to a temporary suspension from doing business.

Since the start of the pandemic, catalytic converter theft has been on a sharp rise. In 2019, reported cat thefts nationwide totaled only 3,389, according to the National Insurance Crime Bureau. The number of reports climbed to 14,433 in 2020. In 2021, that swelled to 65,398, a 353% increase over the previous year.

Thieves target catalytic converters because they’re filled with precious metals such as platinum, palladium and rhodium. Values of those materials have skyrocketed in the past few years. We reported in 2021 that rhodium in particular was $640/ounce in 2016, but shot up to $21,900/ounce five years later. Things have only gotten worse since Russia invaded Ukraine, as the former provides a significant portion the world’s supply of such metals.

Thieves often target taller vehicles like crossovers, SUV and pickups, as it’s easier to crawl under them to access the cats. However, the 2004-09 Toyota Prius is also one of the most frequently preyed upon cars, as its cats have a street value of over $1,000. The list of most victimized cars reads like a best seller’s list, which makes sense.

While the cat itself is expensive, owners typically have to replace other larger sections of the exhaust system. That’s because thieves use reciprocating saws to simply cut out the cat with little regard as to how much it damages the rest of the vehicle. It’s the quickest way to make off with the part, often taking just a minute or so.

“It will now be illegal in California to buy catalytic converters from anyone other than licensed auto dismantlers or dealers,” Newsom said. “You take away the market for stolen goods, you can help cut down on stealing.” Newsom seems to acknowledge that it won’t eliminate the problem altogether. Theft rings can often span multiple states as demonstrated by a recent high-profile arrest, so other jurisdictions will have to follow suit. Car and Driver has a map showing what states are doing about catalytic converter crime.

With any legislation, it’s always a cat-and-mouse game as persistent criminals find new ways to circumvent the rules. But soon, perhaps some California drivers will get a reprieve from thieves.