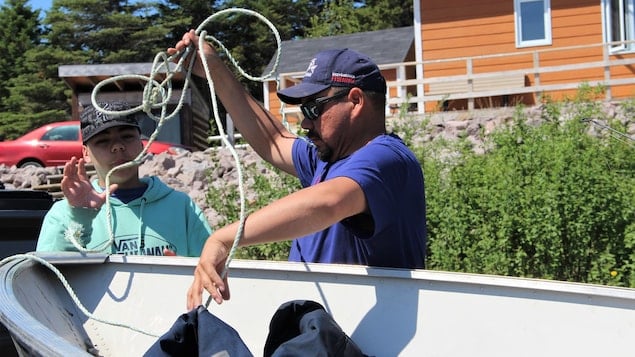 Marius Picard is an old sea dog. This man from Pessamit who has lived in Uashat mak Mani-utenam, on the North Shore, for more than 30 years, knows the Moisie River like the back of his hand. For him, as for all the Innu, it is rather called the Mishta Shipu, the great river.

Marius Picard has been fishing for over 35 years: pike, salmon, lake trout…

Not far from the community, he had to take a dirt road to get to the landing stage. From there, many small boats leave the land to sail on the waters of the Mishta Shipu, with on board, men and women, fishing rod in hand.

In this specific area, net fishing is prohibited to give the resource a chance to renew itselfsays Éric Leblanc, wildlife protection assistant for Uashat.

The net is authorized at the mouth, for members only, and to fish for sea trout. Sometimes they accidentally catch salmon, but that did not happen this year, assures Christian Vollant, manager of the river for the band council,

This year the community fishery has been canceled and members will be provided with farmed salmon.

This year is special for the Innu who love to titillate salmon. No more community fishing! Instead, the board decided to buy farmed salmon to give to members.

All the fishermen encountered on the wharf agree on this decision of the council: it was the right one.

In 2019, the community intensified its control of the river following a transaction funded by Quebec to the tune of $1.8 million. So today, it is the Innu, for the most part, who decide.

Since then, they have acquired an outfitter and are busy developing a fishing code to deal with the decline. Another outfitter along the river is still in American hands.

Christian Vollant has the Mishta Shipu tattooed on his heart.

The non-natives hurt the river with overfishing and also because they didn’t have enough knowledge. There is a sharp decrease in spawners in the river. Then the fishing code will be able to impose quotas he explains while his son shyly slips a toe into the river.

But first, the Innu must make a inventory available resources. The cancellation of Community fishing is therefore, according to Mr. Vollant, a way of showing some consistency.

The Moisie River is a treasure that the Innu strongly wish to protect.

He already believes that this season will be one of the best.

Everyone remembers a lean peach for the past two years

The recently acquired outfitter should also be a success, after two years of closure due to the COVID-19 pandemic. It is open to Innu (free) and non-Aboriginals.

Marius Picard has even installed a chair in his boat for “comfortable” fishing.

According to Mr. Vollant, it is important that the Innu continue to go fishing. Put them on the river, it makes them aware he said, recalling that without this Mishta Shipu, the Innu would not have survived.

A heritage of which all the Innu who are about to board their boat are well aware.

In his little chalet next to the river, Bastien Michel finishes his lunch. For years he has been listing the catches of fishermen: weight and length of salmon. The river is his home.

Bastien Michel is proud to say that he has many spoons in his fishing tackle. He likes to be on the river.

My father was passing by, he said, pointing to the course of the river. It was his portage way to the Far North.

The transmission is also what lives Derrick Pinette who came today with his 12 year old son, Jordan. They left for 3 hours on the water.

This is the trip, this is the battle. I feel in harmony with nature and it is calminghe explains, loading his little boat on which he has even installed a comfortable chair.

The fight is different on the fly, you have to work the salmon. Fly fishing is an artassures Éric Leblanc.

Within two years, the Uashat mak Mani-utenam fishing code should be completed. It must indicate the rules of fishing practice to ensure the sustainability of the resource.