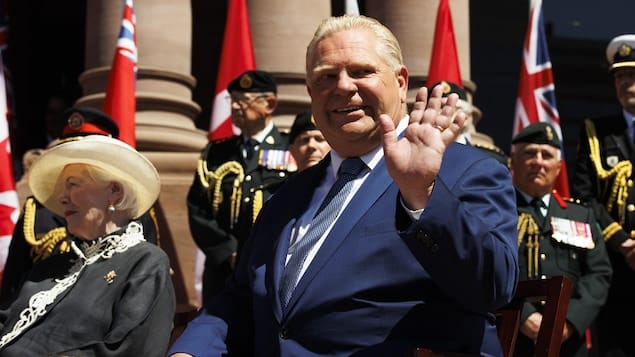 The Assemblée de la francophonie de l’Ontario (AFO) offered its congratulations to the members of the cabinet and especially to the Minister of Francophone Affairs, Caroline Mulroney, highlighting the gains made in files she led, such as the assistance to Francophone organizations during the pandemic and the opening of the Université de l’Ontario français.

In a press release, the organization reiterated its desire to work with many ministers, such as those of Education, Colleges and Universities and Long-Term Care, who will have a significant impact on the development of the Francophone community over the next few years.

” University of Sudbury, continuation of the work resulting from the modernization of the French Language Services Act, access to services in French from the government, including in health and long-term care, there is still a lot of work to be done . »

The Franco-Ontarian Association of Catholic School Boards (AFOCSC) is also delighted that ministers Caroline Mulroney and Stephen Lecce have been reappointed.

We need to be represented by people who understand the reality of minority Francophones in Ontario writes the association, highlighting the contribution of Minister Mulroney.

Its president Johanne Lacombe wants to continue working with Education Minister Stephen Lecce on issues such as the shortage of French-speaking teachers, the necessary recovery for students and staff after two years of the pandemic and the collective negotiations that will be held very soon.

Contract negotiations in the education sector will be one of Minister Stephen Lecce’s important files.

Negotiations in the education sector are also at the heart of trade union concerns.

The president of the Association of Franco-Ontarian Teachers (AEFO) promises that her union will not waver.

The Elementary Teachers’ Federation of Ontario (ETFO) deplores the fact that unions were not involved in some important decisions for their members and for students during the first mandate of the Ford government. She hopes the Minister of Education will change his approach.

As negotiations begin, it is imperative that Minister Lecce grant members of the ETFO the respect they deserveargues the union, which represents 83,000 teachers and other education workers.

Unions are calling for better funding for the public education system to help it recover from the pandemic.

” The ETFO is ready to work with this government to improve public education, but we are also fully prepared to challenge it, if necessary, to obtain the funding, support and resources that students need. »

Sylvia Jones, who was Solicitor General, becomes Minister of Health and Deputy Prime Minister in replacement of Christine Elliott who did not represent herself.

The Ontario Nurses Association (ONA) sent the usual congratulations to new Health Minister Sylvia Jones and her colleagues, but took the opportunity to call for better working conditions and more substantial salary increases.

We do not hide it: there are many challenges on the horizon , said President Cathryn Hoy. The law that limits wage increases to 1% in the public sector and the consequences of staff shortages in the health sector have soured relations with the province.

The Ford government promises to work with nurses and health care workers. We hope this will result in significant actionsaid Ms. Hoy, whose union represents 68,000 members.

The Nurses Association is ready to put aside its differences with the government to try to solve problems like the shortage of nurses which undermine the health system.

The President of the Ontario Chamber of Commerce, for his part, recalled the obstacles encountered by the business community in recent years: pandemic, inflation, supply difficulties and lack of personnel, to name but a few. the.

If we want the economy and people to come out of it stronger, despite all this uncertainty, Ontario must continue to foster stability, competition and growth.he argued.