The aunt of the Hispanic boy who would have frozen to death in Texas tells her version of the story in an interview.

The death of Cristian Pavón Pineda has caused deep sorrow in the Hispanic community in the United States. The 11-year-old boy was found lifeless in his bed and his family thinks his death may have been due to the low temperatures recorded in Texas due to a brutal winter storm.

In addition, they lived in a small trailer home in the city of Conroe and had been without power for two days.

“It is heartbreaking to see that video from the day before, where he was perfectly fine and happy,” said Jaliza Yera, little Cristian’s aunt, in a interview with KHOU 11.

The woman was referring to some images in which the emotional child is seen enjoying the snow for the first time just one day before dying.

On the tragic night, Yera relates that Cristian “was wearing a shirt, a sweater, two pairs of pants and socks on.”

“At 2 am when my brother-in-law woke up to use the bathroom, then he made sure and put another blanket over him,” she added. Cristian slept with his 3-year-old stepbrother so they could warm themselves.

The next day they tried to wake him up. At first they thought that the child was pretending since it was usual for him to fall asleep on days when he did not have to go to school.

They quickly noticed something was wrong and decided to call 911, but had to wait for an operator in Spanish. They tried CPR, but there was nothing to do anymore.

Yera was the one who created an account GoFundMe with the intention of raising money to take Cristian’s body back to Honduras, with his grandparents, just as he longed for.

The stepfather of the boy who died allegedly frozen in Texas tells how he found the little boy already lifeless in his bed.

The terrible winter storms have taken many families by surprise in the southern United States, especially in Texas, where there have been snowfalls and very low temperatures that they are not used to in the region.

Due to the inclement weather, last Tuesday, Cristian Pavón Pineda, 11 years old, was found dead in his bed. His family, who reside in a small house in the city of Conroe, Texas, and who had been left without power that night, argue that he may have died of hypothermia.

Manuel Moreno, Cristian’s stepfather, was the one who found him on the morning of February 16 and in a interview with Telemundo he told exactly how it happened.

“I want to turn him over and I see that the nose had a little foam, but a little and put his mouth like that, on the pillow,” said Moreno, who also explained that that night Christian slept with two two blankets and with his stepbrother of 3 years so they could be warm. 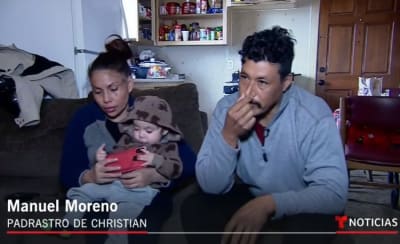 Amid tears and pain, the child’s mother, María Elisa Pineda, said that it is still not explained why her son is dead, since the day before he was in perfect condition. “I don’t understand for a reason that he died, he didn’t complain at all, he didn’t tell me anything that night, nothing. No more like this, we have just died ”, he said.

Upon finding the little boy, the couple called 911, but they were left waiting for an operator who spoke Spanish, they also performed CPR on him, but he was already without vital signs.

Subsequently, investigators from the Conroe Police Department arrived on the scene and, as part of the investigation, examined the parents to determine that they had not used drugs. The police indicated that they had been cooperative during the process. Conroe News.

Conroe Police spokesman Sgt. Jeff Smith said Christian’s family is still awaiting the results of the autopsy performed on the boy last Thursday. However, it would take weeks to determine the cause of death.

In the last video we have of Cristian, he is seen happily enjoying the snow in the backyard of his house. “It was his” first time (in snow). That’s why I was excited outside, ”the mother recalled.

Who also said that his son often told him that he would build him a house so that everyone could live. His family hopes to take his body to his native Honduras.

The family of the Hispanic boy who allegedly died of cold due to low temperatures after the severe winter storm in Texas indicated that they do not need more money to cover the expenses of repatriation of the body to Honduras.

The 11-year-old family of Cristian Pavón Pineda created a GoFundMe account with the intention of raising money to fulfill the boy’s last wish: to return to his grandparents.

The Hispanic boy’s grandparents are in Honduras and the family had requested the collaboration of the community in order to cover the costs of repatriation of the body.

“His wish was to see his grandparents again and his mother wants to fulfill that for him. Please help with whatever you can, God bless you ”, it reads in Spanish on the page of GoFundMe.

They managed to raise $ 88,400,000, although the goal was $ 5,000. Now they have closed the donations, arguing that it was not necessary to donate more money because they already had “more than enough” to be able to take his body back to Honduras.