Quebec provincial police confirmed Friday that a mentally ill man suspected of killing three people at random used an illegally obtained firearm. Meanwhile, questions are being raised as to why the man was released from a psychiatric facility.

Montreal police shot and killed 26-year-old Abdulla Shaikh in a motel parking lot early Thursday after he allegedly shot three men to death in Montreal and Laval, a northern suburb of the city, in a period of approximately 24 hours. Two men, ages 64 and 48, were fatally shot within an hour of each other Tuesday night before a third man, 22, was killed Wednesday night.

Police suspect that the murders were committed by the same suspect, apparently at random.

“Regarding the weapon that was acquired by that person, the investigation is still ongoing as to where he could have gotten the weapon,” Benoit Richard, a spokesman for the Sûreté du Québec (SQ), told CTV News.

“At this point, we know he did not have a permit for a firearm.”

As the police investigation into the multiple killings continues, a decision by Quebec’s mental health review board raises concerns about the health care system’s ability to adequately monitor people with mental health conditions who are released again. in the community.

The doctor recommended, and the board agreed, that he be allowed to remain a free man as long as he met certain conditions set by the hospital, including following the recommendations of his treatment team. He made the recommendation despite pointing out some concerns with his patient’s behavior, including the “denial and trivialization of behavioral disorders, violence and psychiatric pathology”, as well as “he continues to deny the heavy history of accusations of criminal acts of various types, which trivializes future risks”. Act”.

When contacted Friday afternoon, the psychiatrist declined to comment.

Shaikh was found not criminally responsible in July 2018 after being charged with mischief following a series of incidents at Montreal-area airports. In one incident, he set fire to his passport with a candle near the entrance to Montreal Trudeau airport.

CTV confirmed that the shooter had been released with conditions in 2021 from the Hôpital de la Cité-de-la-Santé in Laval.

On Friday, the CISSS de Laval, the regional health board that oversees the hospital, issued a statement to CTV saying it was aware of this week’s killings but could not answer specific questions, including whether conditions were being followed. Shaikh’s release. due to patient confidentiality.

The statement says it is the responsibility of the regional health board to ensure “compliance” with treatment and care orders that patients must follow when released into the community.

“The CISSS de Laval wishes to offer its condolences to the families of the victims.”

A Montreal psychiatrist not involved in Shaikh’s case suggested that sometimes the bar is set too low to decide whether or not a person considered a risk to public safety because of their mental state can be released.

“They have to reach the lowest status that still ensures that society is not in danger. They are looking for the [fewest] possible conditions,” said Dr. Gilles Chamberland.

“But the problem is that it is the hospital that will have to take care of those conditions. Hospitals are there to treat patients, not to follow people who could become dangerous again.”

Dr. Chamberlain, who works at Montreal’s Philippe-Pinel psychiatric hospital, also pointed to the lack of resources for people once they are released from a mental health facility on parole. In some cases, he said, outpatient clinics turn people away because they are too dangerous.

“We have a patient at Philippe-Pinel, and all the resources turn the patient away. We have a court order to release him, but we don’t know where because they turn him away everywhere,” he said.

Lawyer François Legault, who represented Shaikh in March at his annual release review, questioned whether the police acted too quickly, given his delicate mental state.

“It was important to protect society. I totally agree with that, but why is it so important not to take perhaps more steps before entering? Knowing that he might have a gun in his possession, and also knowing that he was in big trouble with the”. mental health,” she asked.

“Why didn’t he ask the social workers or maybe a psychologist to come over with the police team and try to start a conversation with him?”

He noted that even if someone is “the worst [kind of] criminals”, they have the right to dignity.

“Even though this person killed three other people, it doesn’t mean he deserves it,” he said. “You have the right to be arrested… It’s [up to the] justice system to take care of him. We don’t kill people just because they kill others.”

Legault added that he had not seen Shaikh since March.

“We all regret what happened to the three victims,” ​​he said. “As far as I’m concerned, on March 29, nothing makes us think that something like this could happen.”

‘REST IN PEACE MY BROTHER’

The families of the victims of the multiple homicide are also trying to make sense of what happened.

Roxanne Crevier, the sister of the third victim, 22-year-old Alex Levis Crevier, said in a social media post that his death has been a “painful nightmare” and that she is unable to walk around the scene where he was killed. 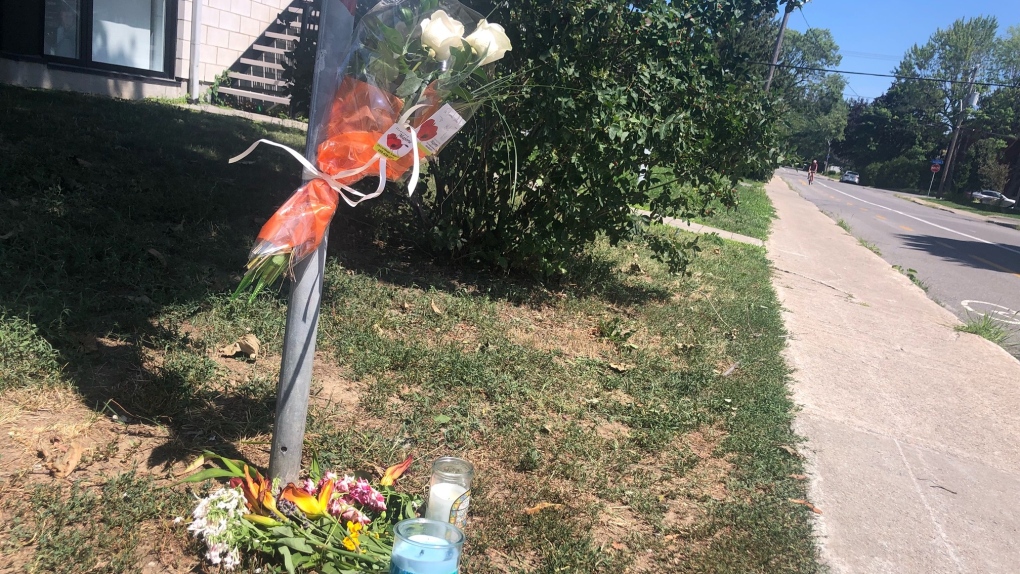 A makeshift memorial on Clermont Boulevard in Laval where Alex Creview, 22, was fatally shot on Wednesday, August 3, 2022. Billy Shields/CTV News)

Crevier was shot around 9:30 p.m. Wednesday on Clermont Boulevard and pronounced dead at the scene. A skateboard was found near his body.

On Thursday night, his sister posted a photo on Facebook of a makeshift memorial at the crime scene.

“All I have now are those memories… seeing you happy to be with us, to be with your nephews,” she wrote in caption alongside the photo.

“I miss you already.”

The other victims were André Lemieux, the 64-year-old father of professional boxer David Lemieux. He was fatally shot around 9:45 pm near the corner of Jules-Poitras and Deguire boulevards in the Saint-Laurent district of Montreal.

Approximately 65 minutes later, Mohamed Salah Belhaj, 48, was shot at around 10:50 pm at the intersection of Sauvé Ouest and Meilleur streets in the Ahuntsic-Cartierville district of the city.

The case was transferred to the Quebec provincial police force, the SQ, which said it believes the shooter acted alone and appears to have chosen his victims at random.

With files from Daniel J. Rowe and Ian Wood of CTV Montreal