A public art installation inspired by Toronto’s Black history was vandalized with a drawing of a slave collar. But it was not reported for a week until the subject saw it herself.

Late Sunday afternoon, Gloria C. Swain, who is the main subject of the group photo, went to see the image which has been on display at Union Station since the fall and saw the defacement.

The device that was drawn around her neck is a heavy iron device used during the Transatlantic slave trade era to punish slaves, prevent escape and make it difficult to lie down.

Swain said she filed a police report and Toronto police said officers have reviewed security footage, spoken to witnesses and have a description of a suspect whom they are trying to identify.

Swain was told the incident was caught on tape Jan. 17 and she saw it on Jan. 23.

The artist behind the piece, Anique Jordan, said she was “rocked” by the incident.

“Gloria is somebody so cherished within the Black community, Toronto Black arts community even more so,” Jordan told the Star. “For Gloria to be the one to go and see herself celebrated and then find that. It just made me sick. ”

Toronto police said its hate crime unit has been notified and will consult with Ontario’s attorney general’s office to determine if this is a hate-motivated event.

For Swain and Jordan the vandalism is visibly racist.

Trending on Canadian News  The Andalusian | Article by Ana Polo

“For somebody to draw that particular type of bondage that is specific to chattel slavery, you had to know what you were doing and have some level hate or some deliberate intent to cause harm to a particular group of people,” Jordan said.

She said racist symbols related to the KKK or nooses circulate widely, but someone would have to have a deep sense of Transatlantic slave history to be familiar with this sort of device.

The photo, Mas’ at 94 Chestnut, is a tribute to a historically Black church which was built in 1845 in the downtown core.

The art piece was acquired by the Art Gallery of Ontario last year, and this vinyl reproduction was created for ArtworxTO, a free yearlong project displaying local art around the city.

For Swain, she said this is a sad reminder of how challenging it is to be a Black artist in Toronto and find space and support. She said she hopes this incident isn’t just “pushed aside.” 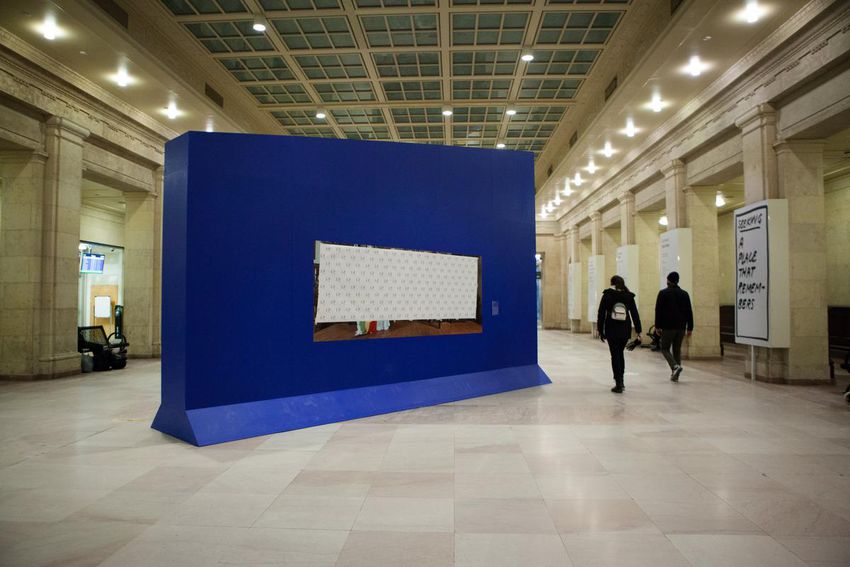 This is not the first time a public art installation featuring Black people has been vandalized. In 2017, some of photographer Jalani Morgan’s photos were slashed when they were displayed on King Street West, according to Photo District News. He mended the vandalism with red yarn, which stood out against the black and white images and showed resilience.

The display at Union Station has been covered with wallpaper and a new vinyl was to be installed Tuesday, curator Maya Wilson-Sanchez wrote in an email to the Star.

“If we use this situation as an example of who is allowed to exist in the city peacefully and freely occupy public space, then this paints a bleak picture of Toronto,” Wilson-Sanchez told the Star.

Trending on Canadian News  Young people and ecology: between anxieties and the will to act