The concomitance of these two circumstances makes the Madrid councilor go through a pronounced pothole. Probably the deepest since he took over the leadership in 2019. A situation that was difficult to predict just four months ago, when they were held the regional elections of May 4.

Before this date, Almeida enjoyed a stable government with Ciudadanos, thanks to its good relationship with Begoña Villacís, and formed a good tandem with the Madrid president, who lived a stormy relationship with the then vice president Ignacio Aguado.

But the tables have been reversed for the national spokesperson of the Popular Party since in the past elections Ayuso swept away, which is now the one who is experiencing a sweet moment with international awards and a candidacy for the presidency of the PP in Madrid that no one wants to oppose .

The PP of Madrid

The reason? Above all, that the mayor has found himself, without wanting to or drinking it, in the middle of a stark battle for the presidency of the PP in Madrid. Without wanting to because it was Pablo Casado himself who, at an informative breakfast, nominated Almeida as a “highly qualified” candidate. 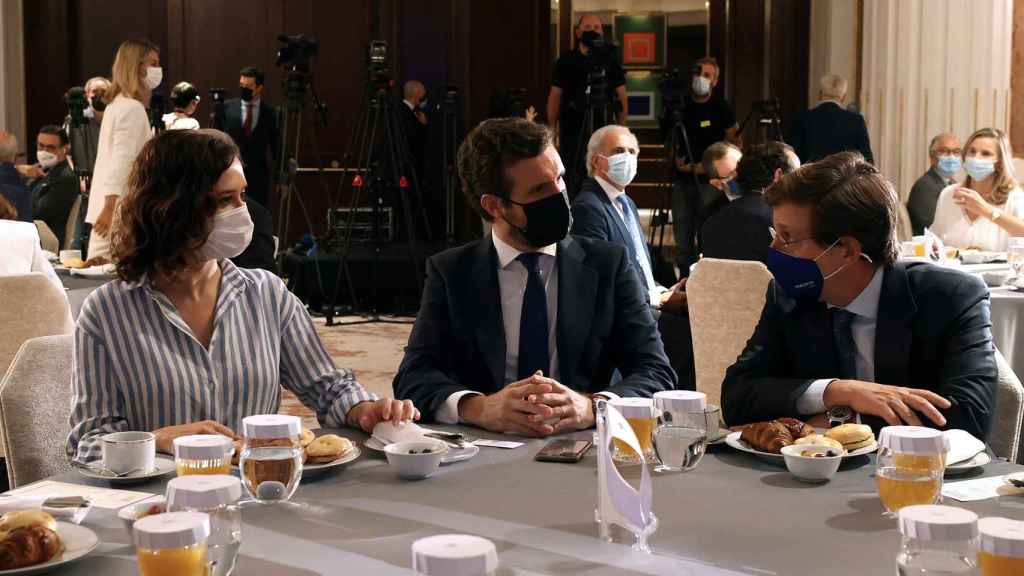 Isabel Díaz Ayuso, Pablo Casado and José Luis Martínez-Almeida this Tuesday at the informative breakfast of the Europe Forum.

Since then, the mayor has not ruled out as party leader in the region, although he has been uncomfortable when asked about this question in his various television appearances. “The people of Madrid do not understand that now we are talking about this”; “there are nine months left for the regional congress”; “we have already talked too much” … and a whole series of platitudes to shake off the pressure of Genoa.

And it is that deep down Almeida is aware that facing Ayuso is something “totally suicidal” at the moment, according to what his environment points out to EL ESPAÑOL. So it is becoming increasingly clear from the presidency of the PP in Madrid, while Ayuso does not stop expressing his desire: “I am a woman. I can do two things at the same time.”

As for the recent hostility of Vox towards José Luis Martínez-Almeida, it is summarized in a nickname: Carmeida. This is how the hard-right formation now calls the mayor in a play on words with the ex-mayor of Más Madrid, Manuela Carmena.

And all for not having completely repealed Madrid Central and having limited itself to replacing it with a new low-emission zone. A decision that, in the words of Javier Ortega-Smith, Vox spokesman in the capital, shows how PP and Ciudadanos have joined the ideas of “the posh progressives” and have bought the argument of “the ecologist religion.”

⚡ @Ortega_Smith uncover the lies of “Carmeida” about Madrid Central.
🔊 The audio that proves it: pic.twitter.com/t5n87oYOmT

Vox criticizes that the initiative has gone ahead “with the votes of four communist councilors” (the former members of Más Madrid who have now founded Recupera Madrid) and that Almeida has “lied” to the Madrilenians after having promised to end Madrid Central in the campaign prior to the 2019 municipal elections, as well as having “breached” what was agreed upon for his inauguration.

The confrontation comes at a bad time, because the popular have to look for the party to their right to agree on the Budgets before the end of 2021. The mayor intends to lower taxes again, and for this he does not have PSOE, Más Madrid or the four wayward councilors who have abandoned Rita Maestre.

From Almeida’s team they take away the iron from the matter and assure that Vox continues to be “the priority partner”, since they understand that anger is part of the “electoral game”, as Ortega Smith himself hinted this past Monday in plenary session of the townhall: “We will see you in the next elections“.