On the same day that provincial leaders and health officials announced some public health measures would be returning and more surgeries would be postponed because of soaring COVID-19 hospitalizations, the Alberta government released new modelling it says those decisions were informed by.

Alberta is leading the country in the number of new COVID-19 infections being reported each day.

The modelling released Friday presents projections for three different levels in terms of the severity of COVID-19 scenarios that could unfold between June 9 and Sept. 29: low, medium and high.

“Current actual data is trending toward the high end of the projections,” the government noted in a news release. “Therefore, numbers may exceed the projections.

“Peaks in the model are only estimates, and actual peaks may be higher and later than anticipated if current growth trends continue.”

The report noted that currently, hospital ICU admissions linked to COVID-19 “are tracking along the middle scenario that peaks around 180.”

“However, trends can change quickly… with ICU numbers shifting from the low to medium scenario within one week,” the report notes. “If another acceleration happens, the impacts could move towards the high scenario, which peaks around 300 in ICU, higher than any of our previous waves.”

As of Friday afternoon, there were 118 COVID-19 patients in hospital ICUs in the province, according to Alberta Health.

Under the modelling’s high scenario, non-ICU hospitalizations because of COVID-19 were projected to top out at about 700 this month.

As of Friday afternoon, there were 397 Albertans in hospital with COVID-19 who were not in ICUs.

Alberta Health Services said Friday that ICUs in the province are 96 per cent full and that more non-urgent surgeries are being postponed to deal with the pressure the coronavirus is placing on the health-care system.

Kerry Williamson, a spokesperson for AHS, told Global News that non-ICU hospital capacity in the province was at 84 per cent on Friday afternoon.

“We currently have 219 ICU beds open in Alberta, including 46 additional spaces,” Williamson said in an email. “There are currently 209 people in ICU, including 120 with COVID-19.

“Several of our zones are at or near capacity in their ICUs.” 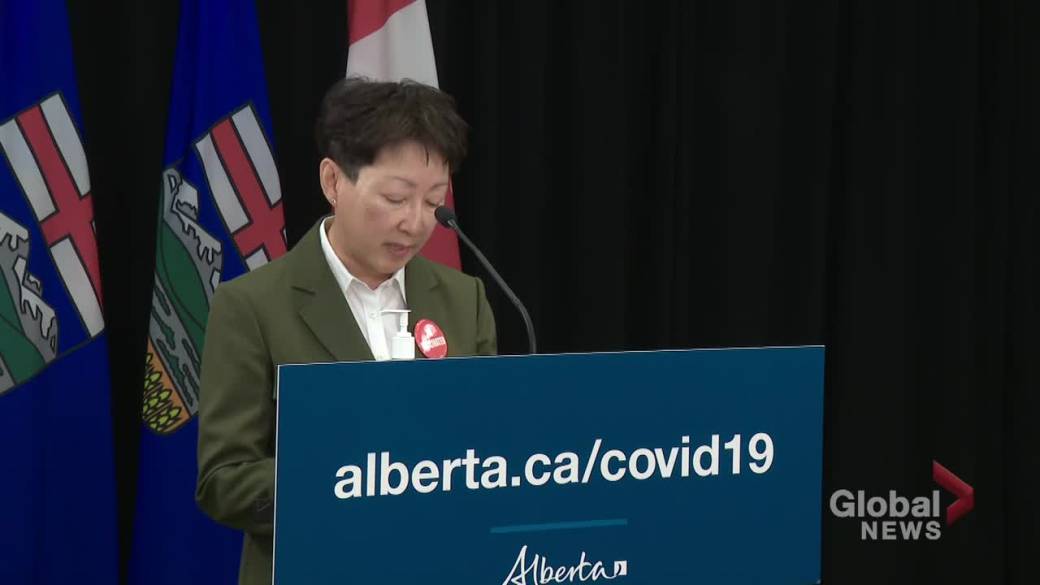 2:54AHS postpones up to 60% of scheduled surgeries due to COVID-19 surge in Alberta

Williamson noted that in the Edmonton zone, AHS has opened 16 additional ICU beds, bringing that region’s total number of intensive care beds to 88, and added that more beds will be added “as needed.”

“Edmonton zone is operating at 97 per cent of current capacity (including 47 COVID positive patients in ICU),” he said. “In Calgary zone, we have 83 ICU beds, including six additional spaces that opened this week, and 11 additional beds that have remained open since December 2020.

“Calgary zone ICU is operating at 91 per cent of current capacity (including 38 COVID positive patients in ICU).”

“(This is) to ensure that at least two metres can be maintained between patients and designated support persons in the waiting room,” he said.

“The waiting room expansion into the hallway will be for patients who have been triaged and are awaiting admittance to the Stollery and UAH emergency departments; the hallways will not be used for direct patient care.”

In terms of the number of daily new COVID-19 cases, the high scenario in the model released Friday projects Alberta could see up to 1,900 new cases per day by mid-September, a number the report notes cases are currently “tracking towards.”

“It is very likely that unless interventions are put in place, the magnitude and timing of this peak will exceed these current projections given the anticipated behaviour and contact pattern changes that will occur with upcoming fall activities,” the report reads. “Therefore, the trend lines should not be taken as guaranteed predictions of the future.

Trending on Canadian News  Amid hunger strikes and protests, BC forestry industry meets to map its future

“If cases accelerate further, there would be even greater impacts than currently predicted in our acute care system.”

On the same day the new modelling information was released, Premier Jason Kenney announced the government is now offering $100 to Albertans who aren’t fully vaccinated to go get their shot. 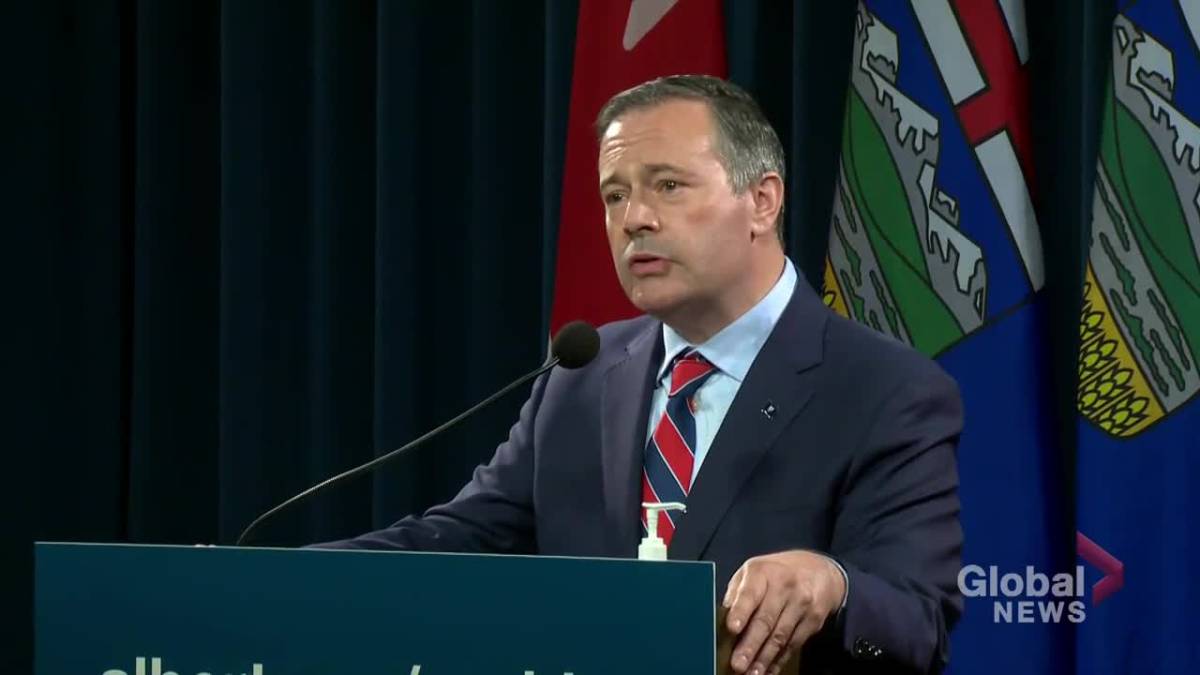 6:35‘This is not a time for moral judgements’: Kenney responds to criticism of $100 vaccination incentive

He said 70 per cent of eligible Albertans 12 and older are now fully vaccinated while 78 per cent have had one jab. The premier noted unvaccinated Albertans are the reason hospital capacity is once again being stretched thin these days.

The government also announced Friday that masks will once again be mandatory for people across the province when they are in indoor public spaces and workplaces, except in schools, where school boards will make those decisions. 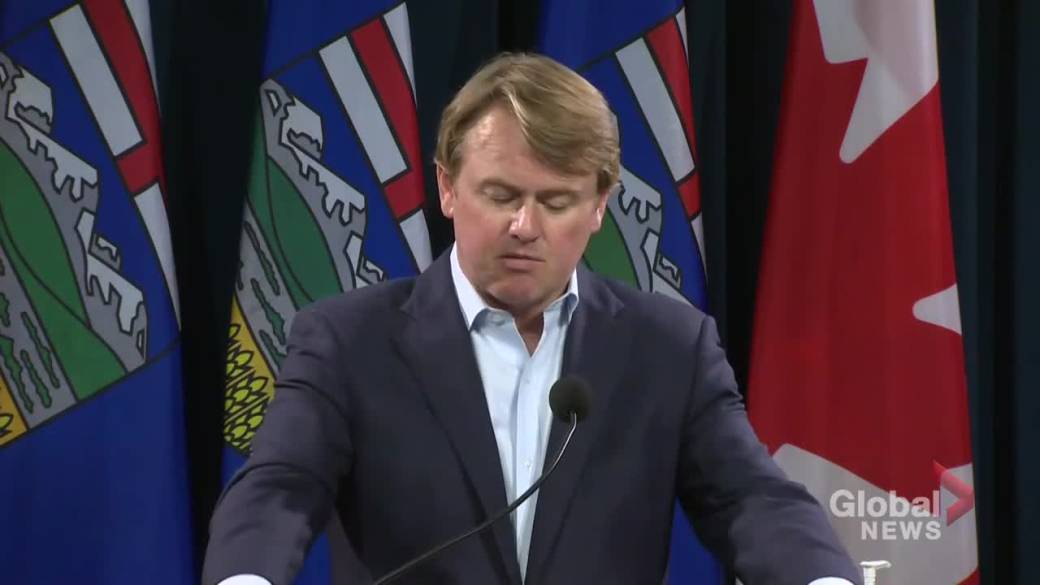 Alberta is also suspending the sale of alcoholic beverages at bars and restaurants after 10 p.m. in an attempt to bend the curve of new coronavirus infections.

Unvaccinated Albertans are also being asked to limit their close contacts to 10 people or less.

Alberta Health said it will continue to update its modelling as it receives new information and the government noted that the data released Friday “assumes that the level of testing and case identification is similar to historical estimates, and that additional transmission is negligible following case identification.”

The government noted the modelling does not factor in the possible emergence of new variants, unexpected transmission leading to outbreaks, waning immunity of full dose vaccinations, a potential increase in future transmission and any future changes in policy regarding non-pharmaceutical interventions. 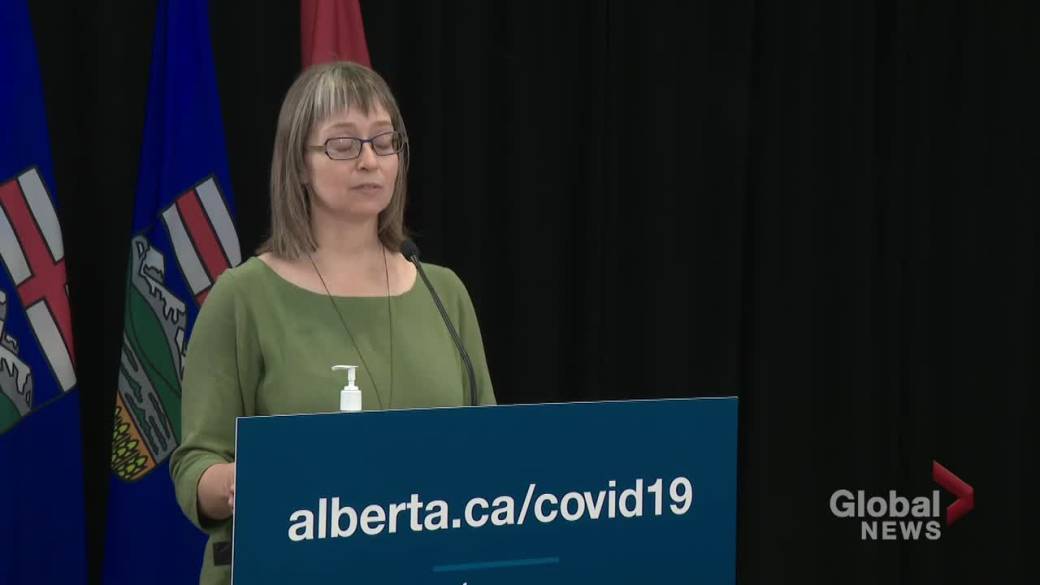 The report also shows figures pointing out how much less likely fully vaccinated people are to be hospitalized with COVID-19 than those who don’t get their jabs.

“Overall hospitalization rates are around 10 times greater for unvaccinated compared to fully vaccinated people in the 80+ age group,” the report reads. “In younger age groups, the relative impact of vaccine increases and unvaccinated people are 30 to 120 times more likely to be admitted to hospital with COVID-19 than those with vaccine protection.

“Across all age groups, COVID-19 hospitalization rates are much higher among unvaccinated compared to those who are fully vaccinated.”

Following weeks of calls for chief medical officer of health Dr. Deena Hinshaw to release the data that prompted her to recommend to the government that it plan to shift Alberta’s response to COVID-19 from a pandemic approach to an endemic approach, the province published a summary on Friday detailing what led to that controversial decision, which has since been postponed.

In late July, Hinshaw announced a plan to significantly scale back COVID-19 testing and contract tracing and to no longer require people with COVID-19 to self-isolate, saying the province was moving to an endemic response so health resources could be redeployed to other pressing health-care needs.

The plan was to take effect in mid-August. But on Aug. 13, Hinshaw announced she was postponing the changes until Sept. 27 to give health officials more time to monitor the Delta variant and its impact on Alberta.

The summary highlights the impact COVID-19 measures have had on Albertans’ mental health. One example the summary notes is that in 2020, “hospital admissions for anxiety for children between the ages of five and 18 were 19 per cent higher than the previous five-year average.” 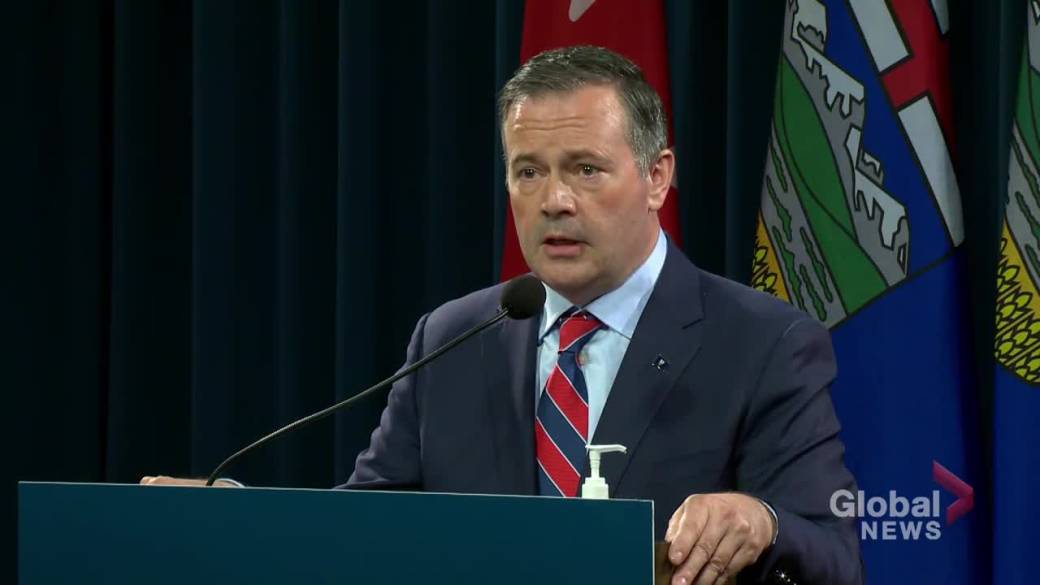 The document also notes that cancer screening rates have been significantly impacted in Alberta since the pandemic began, and highlights the impact on cancer screening for women as an example.

“Early detection is key to the early treatment of cancer, which is dependent on cancer screening. To increase screening and catch up with the gap, time and human resources are needed.”

Other health impacts the summary cites as being negatively impacted by so many resources being dedicated to COVID-19 are a drop in childhood immunization rates for infections like Hepatitis B, an increase in deaths linked to opioid use, a provincial spike in syphilis cases and surgical backlogs.

“There is a tradeoff between continuing with an extraordinary response to COVID-19 or integrating our response with other respiratory viruses and reallocating some resources to other health priorities,” the document reads. “Prior to broad immunization, an extraordinary response was required to prevent the health system from becoming overwhelmed, which would have led to untenable COVID-19 and non-COVID-19 impacts. With availability of vaccines and reduction of severe outcomes, COVID-19 will ultimately become one risk among many, to be managed in an integrated way with other respiratory viruses.

“Given the impact of vaccination on reducing severe outcomes, the modelling included estimates of the number of anticipated hospitalizations (both ICU and non-ICU) and
whether the expected peak was considered to be manageable within system capacity.

To view the summary in its entirety, click here.

Even though the plan to shift away from a pandemic response won’t be implemented for at least another three weeks, Hinshaw told reporters on Friday that “it remains important to maintain a sustainable approach to COVID-19 that considers the harms of interventions as well as direct harms from COVID(-19).”

“It is also critical that we continue to adjust our response as needed when new information becomes available,” she added.

When asked if the plan to scale back testing and not require people with COVID-19 to self-isolate would still take effect on Sept. 27, Hinshaw was non-committal.

“We’re looking closely at the timeline for that particular point in time at the end of September with respect to self-referral testing and mandatory isolation to determine what is more appropriate in terms of a timeline on those pieces,” she said.

“With respect to contact tracing, it’s important to note that what we know from our serology data is that throughout the pandemic, we’ve only captured about one in four of our actual COVID(-19) cases in the community… We think that we may be catching even fewer of them now.

“And what we know is contact tracing in a time when there are no public health measures and people have many, many, many contacts over the course of two weeks, is extremely labour-intensive. So having teams of thousands of people doing contact tracing for everyone in the population when we’re not requiring quarantine for fully vaccinated people is a huge investment of resources. Many of those individuals are health-care workers who are needed in other parts of the system…

“So it was the decision to shift contact tracing, focus on case investigation… And utilize contact tracing in high-risk locations such as acute care and continuing care and that is what’s underway.” 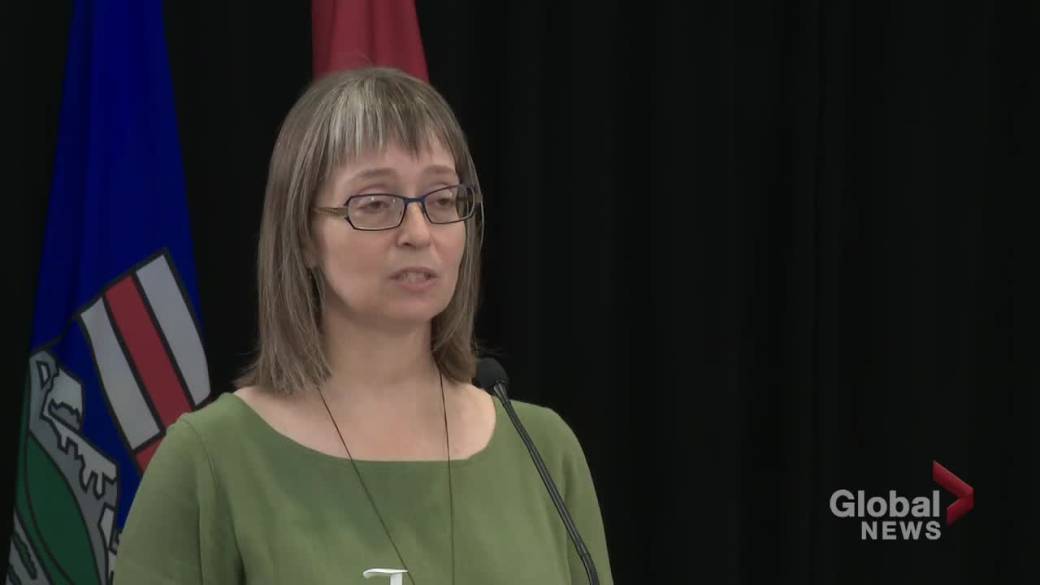