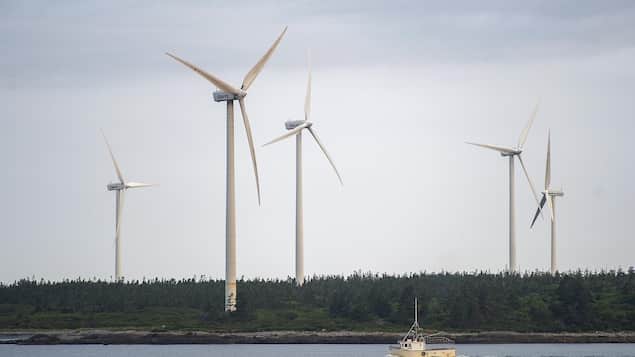 World Energy GH2 expects to produce up to one gigawatt (GW) of energy from the new wind farm, more electricity than the Muskrat Fallsto produce green hydrogen and ammonia at a new plant in Stephenville.

What is green hydrogen?

Green hydrogen is dihydrogen (H2) produced using low-carbon electricity, such as wind power. Its production consists of passing an electric current through water (H2O) in order to break down its molecules and extract hydrogen from them.

In Stephenville, about 80% of the hydrogen produced in the plant World Energy GH2 would then be used to make ammonia (NH3), which is denser than hydrogen and therefore relatively easier to transport. This process involves extracting nitrogen from the air and combining it with hydrogen.

The construction and maintenance of the Nujio’qonik project, the Mi’kmaw name for St. George’s Bay, would cost approximately $2.7 billion. It would create about 2,500 direct and indirect jobs, including 100 permanent jobs, according to documents (New window) submitted to the Government of Newfoundland and Labrador as part of an environmental assessment.

The 164 wind turbines would be visible from almost anywhere on the peninsula. They would measure about 200 m in height. The rotors would be 158 meters in diameter.

But their construction would also have significant impacts on the economy of the peninsula, which has the highest unemployment rate on the island: 33.5% in 2016.

The 160 wind turbines must be maintained, the access roads will have to be cleared. There will be jobs for many peoplesays Henry Gaudon, the mayor of the village of Lourdes, in the north of the peninsula. The airport [de Stephenville] will benefit, the port will benefit. Stephenville is going to be the hub, but the power is going to come from the Port-au-Port peninsula.

A map of the Port-au-Port Peninsula in western Newfoundland. The red dots represent the location of the wind turbines proposed by the World Energy GH2 group.

In order to improve employment opportunities for local residents, training will be offered, in collaboration with the [Première nation] Qalipu, to meet staffing needsreads a report prepared by the consortium and dated June 10.

The training programs will aim to develop the skills required by the renewable energy industry and help the provincial workforce transition from the oil and gas industry to a renewable energy-based energy economy.

The ammonia and green hydrogen would be transported by pipeline to the port of Stephenville and would then be loaded onto ships.

The Nujio’qonik project is only the first phase of the plan for World Energy GH2. Two other huge wind farms are proposed for two areas north and south of Stephenville in western Newfoundland. Phases 2 and 3 are not yet subject to an environmental assessment.

Tom Rose is the mayor of Stephenville (files).

The new plant, in Stephenville, would be on the site of the former AbitibiBowater paper mill, which has been closed since 2005.

Several consultations have been held with the municipalities and First Nations of the region since last March.

In a report submitted to the provincial government as part of the environmental assessment, World Energy GH2 promises to carry out analyzes concerning the noise and visual impacts of wind turbines in the Port-au-Port peninsula.

The Nujio’qonik project would be the first major wind farm built in Newfoundland and Labrador since the lifting of the moratorium on onshore wind energy production on April 5. This policy was established in 2007 to ensure that the hydroelectricity produced by the Muskrat Fallsa megaproject whose costs have exploded, is used by the population.

The Minister of the Environment, Bernard Davis, must make a decision on the environmental assessment of the project by August 5. Residents have until July 27 to vote on the project.