This story begins by wanting to cross the bay of Huelva, as the Sevillian sings. Like fishermen returning to Punta Umbría, our destination is the province’s most popular “moon hill”: the raft of phospho-gypsum. After a thousand and one criticisms for its alleged danger to human life, the responsible company has said enough and plans to make the raft the largest environmental recovery project in the world. This will be the Fertiberia plan to create the future plant lung of Huelva.

This report begins in Seville on a hot Wednesday morning. On the way to Huelva, a servant goes over the day’s plan: get to know first-hand and without press releases the project for the restoration of the phospho-gypsum ponds. “What is this?”ask many companions of this house who have not heard about the subject beyond Despeñaperros.

Lets start by the beginning. Fertiberia had a factory dedicated to the industrial production of phosphoric acid. Neighboring the Marismas de Odiel, the manufacturing itself generates phosphogypsum, a residue with a peculiar storage. The only and best technique is the height stacking of the gypsum generated and in a closed circuit. The method is legal and is done in other parts of the world.

An operator sprinkles water to prevent dust from rising as vehicles pass.

After years and years with this practice, the authorities force Fertiberia to stop stacking plaster in the area. The decision marks the end of your plant’s production and its closure in 2010. Justice also forces the company to restore the area, an extreme that has not yet occurred pending the ‘OK’ of the competent administrations. Despite the speech, Fertiberia denounces the “lies and falsehoods” about the raft that indicate that the residue is from toxic to carcinogenic.

With that myth in my head, the photographer and a servant arrived at the meeting point. Both with appropriate footwear and comfortable clothing in case we have to wear PPE to visit the restricted area to the public. My ideas of Steven Spielberg vanish when the director of the Restore 20/30 project, Juan Ramón Miró, clarifies that the only thing necessary is an SUV to drive through the area. The tour begins through the bowels of the phospho-gypsum rafts.

With camera and notebook in hand, we crossed the fence and entered the rafts that are surrounded by the marshes, the skyline de Huelva and the municipality of Palos de la Frontera. Divided into five zones, the space is spread over about 720 hectares. Restoration corresponds to zones 2, 3, 4 and 5. Zone 1 is not counted because it has already been revegetated by the Junta de Andalucía.

As we move through the area, the potholes in the asphalt and our incredulous looks increase. While the pilot and copilot give us brushstrokes of the project, they insist: it is a non-hazardous waste certified by the Nuclear Safety Council. Proof of this, they point out from Fertiberia, is the animal life of the area. Flamingos, horses, partridges or rabbits appear time after time on our way. A picture worthy of National Geographic. 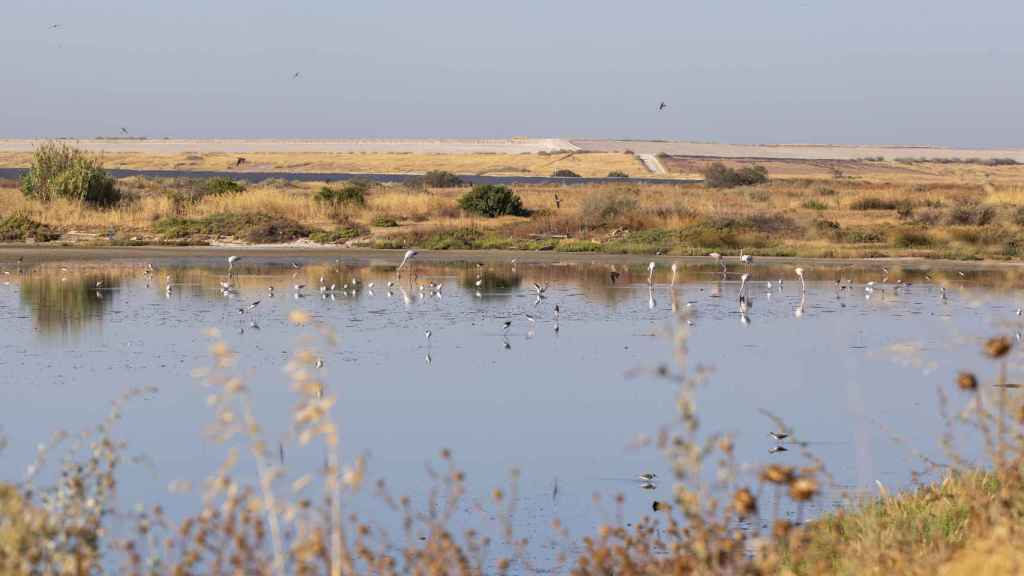 Flamingos in the vicinity of the phospho-gypsum raft.

Juan Ramón Miró points out and explains, leads and also laments the alarmism generated in society. The brain of the project makes it clear: It’s not dangerous. It is a natural residue assimilable, for example, to the granite of the roads of a paving stone of any street. “It is the most controlled raft in the world,” he explains, denying the Andalusian Fukushima. Meanwhile, trucks spread water to prevent dust from rising.

Restoration is the road and the vegetation of the area the objective of Restore 20/30. The project has the design of the company Ardaman & Associates, the American engineer specialized in the treatment and recovery of phosphogypsum. The company already has more than 60 plans for projects to close similar ponds in France, Canada or Australia and, in the future, in Huelva. The Spanish firms Eptisa and Inerco participate in its development and execution.

The project is simple once explained in Christian. First, the internal water of the reservoir and that infiltrated by the rains will be drained, a process that Fertiberia already started 5 years ago and that advances the designed plan. At no time, they say from the company, that water is in contact with the marsh. For this, they have perimeter collection tubes in the areas that they measure day and night so that this does not happen. 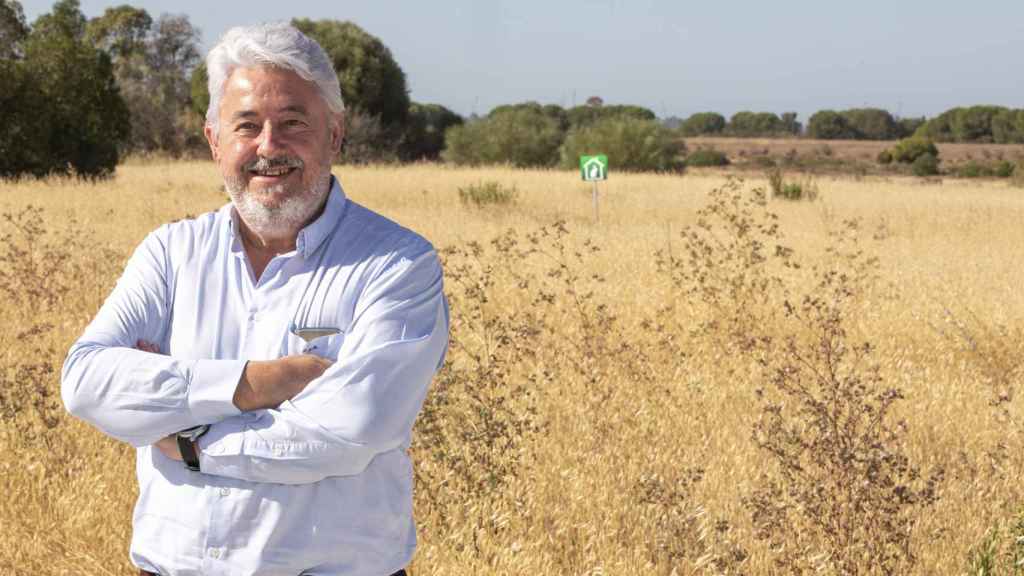 The director of the Restore 20/30 project, Juan Ramón Miró.

After the water has been drained from the tanks, the second step is to prevent the water from re-entering the stack. Therefore, the objective is to make the area waterproof using sheets and layers. All of this will be done while ensuring that phosphogypsum have no contact with the outside for which perimeter seals are available
raincoats and protection of breakwater or channels that prevent their exit and contact with the environment.

Once these steps have been completed, Fertiberia’s goal has arrived: to revegetate the area and turn it into the lung of Huelva. The idea of ​​the company is to create a space as if it were Central Park in New York in the Andalusian city. This will take 10 years for total water drainage, encapsulation of phospho-gypsum and revegetation, and another 30 years. monitoring and control with continuous analysis.

Trending on Canadian News  BC should stop using the RCMP and create its own police, says committee of elected officials

With an investment of 70 million euros, Restore 20/30 will generate more than 100 direct and indirect jobs during the first ten years. To all this will be added the economic impact on local companies that will also participate in the development of the project. Figures aside, Fertiberia’s plan has the approval of the National Court and the Ministry for Ecological Transition. 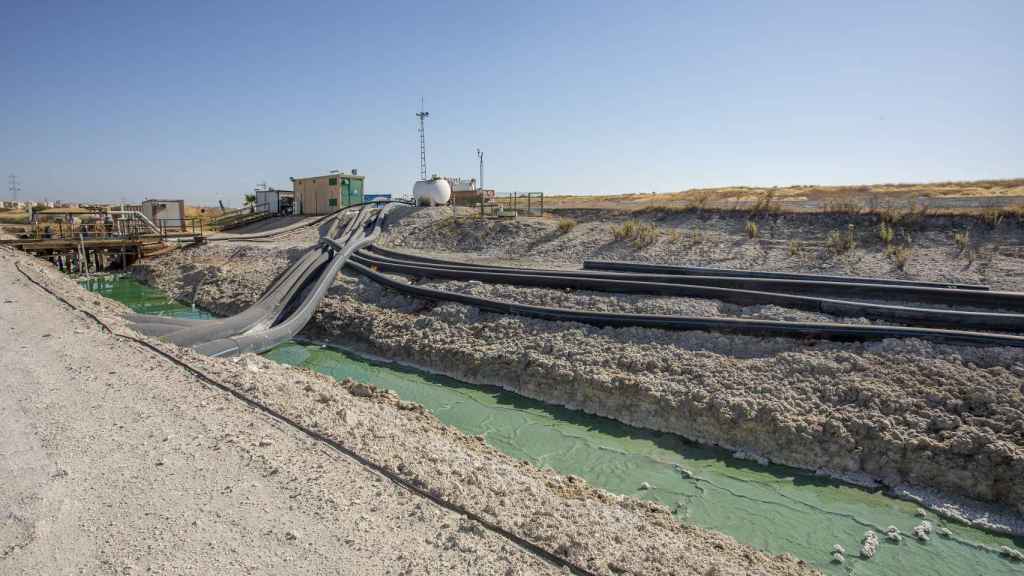 Installation that measures the water collected by the perimeter collection tubes.

Administrations and the company agree that it is the best possible project to restore the area. There are many critical voices calling for the transfer of plaster to other areas of the province. It could be done? Where would i go? From Fertiberia they see it unfeasible. “We would need 500 trucks a day for 30 years to move it to 10 landfills in towns that no one would want to have,” explains Miró.

With the papers, the future plan and animal life on the table, the big question is this. Why does the raft have such a bad reputation if reports and authorities say otherwise? “Mea culpa”, they respond from Fertiberia. “We have not been able to explain it. It is a very technical and unknown sector that has had to endure lies with unfounded fears ”.

The company recognizes the profound damage that this image has done, both for the company and for Huelva itself. This trend changes in October 2020, at which time the project is exposed to the press and Fertiberia listens and responds. “We defended the project and they asked us all the questions,” says the leading fertilizer production company.

Proof of tsunamis, extreme earthquakes and torrential rains, Fertiberia is waiting for the latest reports to arrive so that they can be communicated to the Ministry and the National Court to give the green light to the start of the works. It will take 30 years for this newspaper to count the birth of that lung. And again, we will cross the bay of Huelva, as the Sevillian sings.