Millions of liters of sewage have leaked into the Assiniboine River, and more sewage may continue to be released into it.

Alexis Kanu, the executive director of the Lake Winnipeg Foundation, is concerned after the City of Winnipeg let millions of liters of combined sewage flow into the Assiniboine River.

“It is all that water that is getting into the sewers from that melting snow that’s overwhelming our temporary pumps,” Wiebe said.

She said the City began a controlled sewage outfall at the 1740 Portage Avenue and 499 Tylehurst Street outfall locations – letting the combined sewage empty into the river. 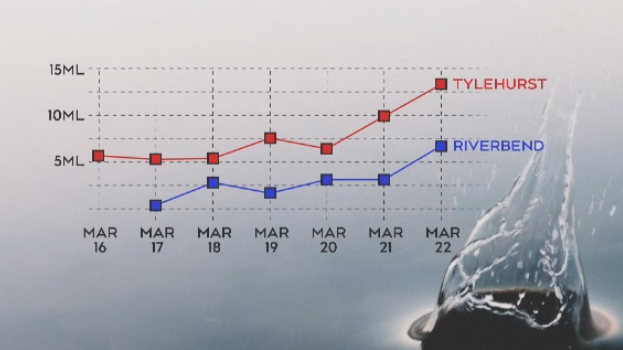 From March 16 to 22, more than 72 liters of combined sewage million went into the Assiniboine River. (Source: CTV News Winnipeg)

Wiebe said the Assiniboine River was chosen in order to spare the construction site and Omand’s Creek from the sewage.

“We build this amazing community space on the river in the winter,” Kannu said. “There are kids skating, families gathering together, and to watch that just get covered in sewage when spring rolls around – it’s awful.”

Sewage could continue to fall into the river until Saturday when construction wraps up if the snow keeps melting.

”We have crews monitoring it around the clock,” Wiebe said. “Our contractors are working around the clock. It’s very unfortunate but we are doing absolutely everything we can to get this pipe back in service.”

The city said after the construction project is completed it will conduct a review to see what could be improved in the future.