The echoes of the seismic activity that originated each of the Canary Islands millions of years ago seem to be felt with each new earthquake and eruption in the archipelago. The guts of La Palma tremble again, and the magma, trapped in the depths of the island for years, struggles to rise to the surface. The deformation of the ground is already greater than six centimeters and the lava produces tremors closer and closer to the island’s crust.

For seven days, the more than 1,600 earthquakes chained They are especially affecting the Cumbre Vieja volcano area. The formation accumulates up to 11 million cubic meters of magma at an estimated depth of about 6 kilometers that may or may not vary in the next few hours, days and even months.

Experts don’t see a rash clearly, but they don’t rule it out either. Scientists are currently monitoring the situation while authorities work to carry out evacuation or emergency plans if necessary. The volcanic traffic light stands in yellow alert phase for the municipalities of El Paso, Los Llanos de Aridane, Mazo and Fuencaliente. A level of threat that means that there is a state of alert, a more intense monitoring of the situation and a greater flow of information between Civil Protection and the population in case an evacuation is necessary.

Why is it happening now?

If you look at the seismic map of La Palma these days, you immediately notice numerous circles, very close to each other, and even superimposed. The island has become a veritable hive in which thousands of earthquakes shake its surface in a very short space of time. It is what experts in volcanology call seismic swarm.

The seismic swarm of La Palma.

As explained by Itahiza Domínguez, a seismologist at the National Geographic Institute (IGN), although this seismic episode began to be noticed last Saturday, it is a process that started long before. In 2017, 2018 and 2020 there were a series of swarms, with earthquakes at depths of between 25 and 35 kilometers. Since then, says the expert, the IGN already knew that this process “had to do with magma that was possibly accumulating in the upper part” and they did not know “when it could be triggered.”

What happened these days is because it is when you have achieved the necessary strength to reach the surface. Domínguez points out that magma is a partially molten rock, with a content of crystals and gases, which is found very deep. When the time comes, due to its temperature, it has the necessary strength to ascend and escape from the deepest part of the earth. “Right now, it has found the crust of the island, and surely the overpressure that this magma is exerting is what is causing the earthquakes and the deformation of the ground,” explains the scientist.

David Calvo, spokesman for the Canary Islands Volcanological Institute (Involcan), points out that this episode “It is a normal operation of the island” and that in “90% it goes unnoticed by the population”, because the earthquakes it causes are not of great magnitude. Explain that at the base of the archipelago there is a magmatic body that rises and gradually reaches the surface. “Its logical operation is that this happens, that from time to time the magma tries knock the door to get to the surface. This is what is happening now, “clarifies Calvo.

What is the current situation?

The swarm continues. The tremors and deformation of the ground continue, two important aspects to understand that the magma is close to the surface. As reported by the IGN, there has been a deformation greater than 6 cm and earthquakes have been occurring at a depth of about 7 km, although some have occurred within a kilometer or less. Some episodes that began in the center of the island and in the last hours have moved west.

“Right now we are waiting for what the magma can do”, confesses Calvo, The swarm “can end here, the magma will not move anymore and lose its energy”, or also “it can keep trying to reach the surface by drilling with those earthquakes and that deformation. ” However, it ensures that “a deformation of more than 6 cm is worrying because it indicates that the magma is pushing hard”. 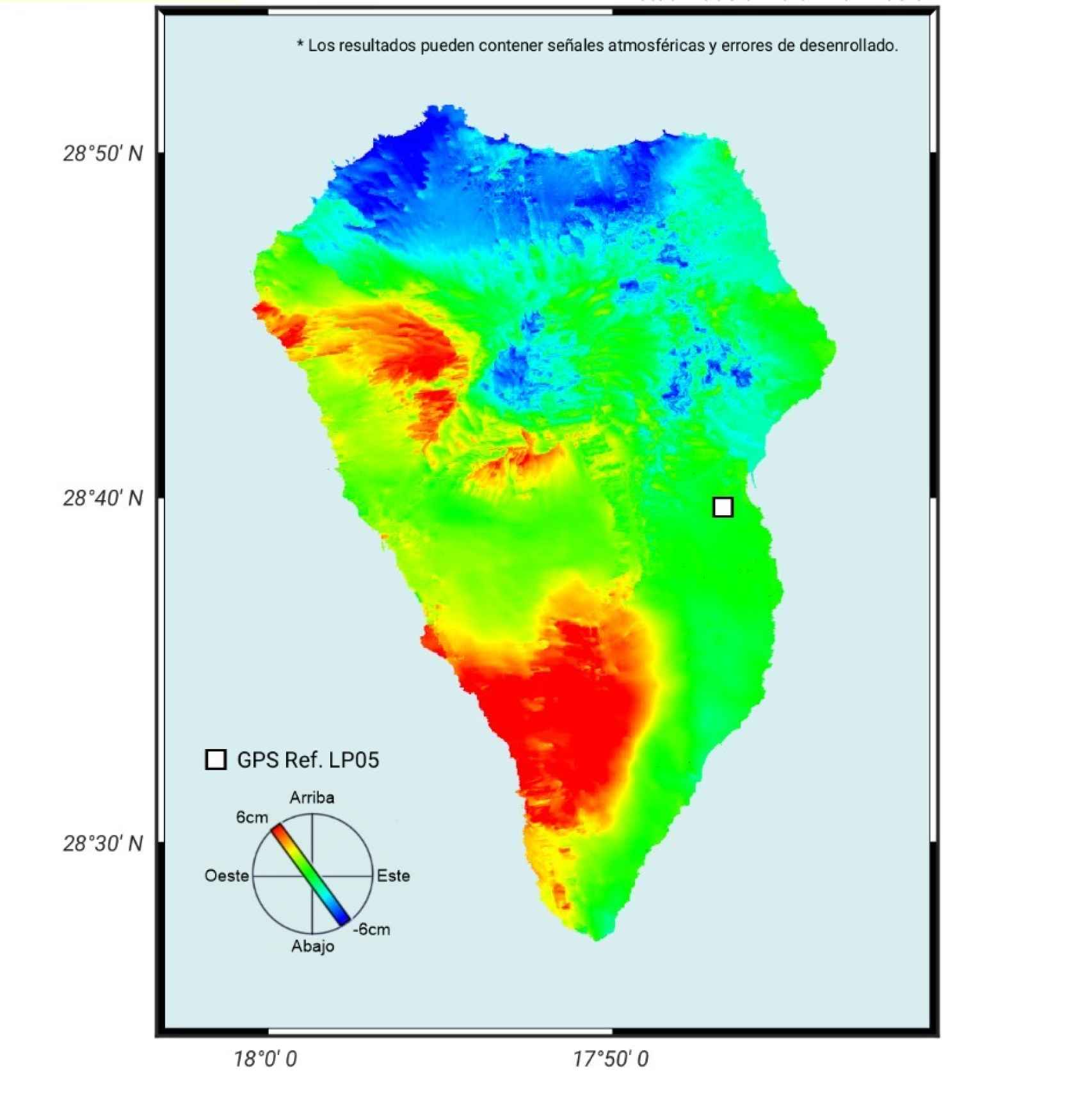 The deformation of the terrain measured from the satellite.

The IGN researcher agrees on this, adding that “it doesn’t always come to the surface”, because that depends on the strength of the magma, what it finds along the way and whether it manages to find a way to the surface. “The magma does not open a path, but looks for the easiest one to climb, that is, if it does not find it, generates earthquakes until it loses strength“. For this reason,” it is not clear if it will erupt or not. “This episode can be very long, explains Domínguez, and although in the last hours it seems to be stopped,” these processes can last weeks or months. ”

What risks are there?

Experts remain cautious with the situation and insist that now is the time to observe the data from the stations they have deployed on the Canary Island. As Calvo says, although the night from Wednesday to Thursday was “quite quiet”, “this does not mean that it is over, because many times the swarms need to catch their breath, regain energy to push again. “

However, from Involcan they launch a message of calm: “The earthquakes are not of great magnitude nor will they be”, and recalls that in the eruption that took place in El Hierro in 2011, the maximum magnitude reached was five .

The IGN researcher adds, however, that “although they are not very large earthquakes, yes they are being felt in various areas of the island“. The expert explains that at level 2, it is very slightly noticeable; at 3, vibrations are perceived even standing up, and at 4, you can even throw an object. At levels 6 or 7, earthquakes can already generate damage to a structure or building, “but we have not gotten there yet.” From the IGN they report that, for the moment, the maximum intensity recorded is level 4.

The Canary Islands Volcanic Emergency Plan (Pevolca), managed by the General Directorate of Security and Emergencies of the Government of the Canary Islands, keeps track of the situation. At the moment, it has placed four municipalities on yellow alert, but rule out an imminent eruption. Now, what they do expect are earthquakes of equal or greater intensity.

Had it happened before?

It is not the first time that La Palma has been shaken by a chain of volcanic earthquakes. And it is about a volcanically active island, which has had eruptions in 1949 and 1971. Episodes that have also been preceded by earthquakes of greater or lesser magnitude.

There is hardly any data on the eruption on the island of La Palma, instrumentation was lacking. Not so with the most recent eruption in the Canary Islands, that of the island of El Hierro. As Domínguez tells, It happened 10 years ago and it was a process that lasted almost three months.. However, “it was a slower process than the one we are experiencing now in La Palma,” he says, and comments that it reminds “of what was experienced in the last two or three weeks in that seismic crisis in El Hierro.”