Hispanic dies after shooting at USCIS office in Orlando. Authorities announced the death of the Hispanic man following a violent shooting at an office of the Citizenship and Immigration Services (USCIS, for its acronym in English).

The events occurred in central Florida, where the police department arrested on Monday a man who hours earlier shot a Hispanic to death in front of an office of the United States Citizenship and Immigration Services (USCIS).

Shooting at USCIS office in Orlando

The Orlando Police Department (OPD), which has not identified the detainee or the victim, indicated that the two implicated are men and both of Hispanic origin, according to Efe. A woman, who is also Latino, was accompanying the mortal victim, although she managed to flee the scene, the police said.

“We can confirm that a suspect in this investigation is now in the custody of the Orlando Police Department. We will continue to provide you with more information as it becomes available. Tweet.

How was the shooting at the Orlando USCIS office?

In addition, authorities noted that the suspect fled in his vehicle from the USCIS office and was later detained in neighboring Osceola County. The victim died at the scene of the events and as of the writing of this note, he has not been identified.

Diego Toruno, of the Orlando Police Department, said that a man and woman of Hispanic origin were walking towards the USCIS office this Monday morning when a car approached them and shot them, the relationship of the three implicated is still being investigated. , according to the local media KFGO

Strong police presence after shooting at USCIS in Orlando

Later, the Orlando Police Department said it was working on the shooting that occurred at the USCIS office at 5400 S Semoran Blvd in Orlando, Florida. “There is a strong police presence in the area,” the statement added.

Police officers pursued the suspect who was traveling in his vehicle and detained him. He was arrested, but has not been identified as of this writing. The arrested man is presumed to be the alleged shooter, according to the Orlando Sentinel. 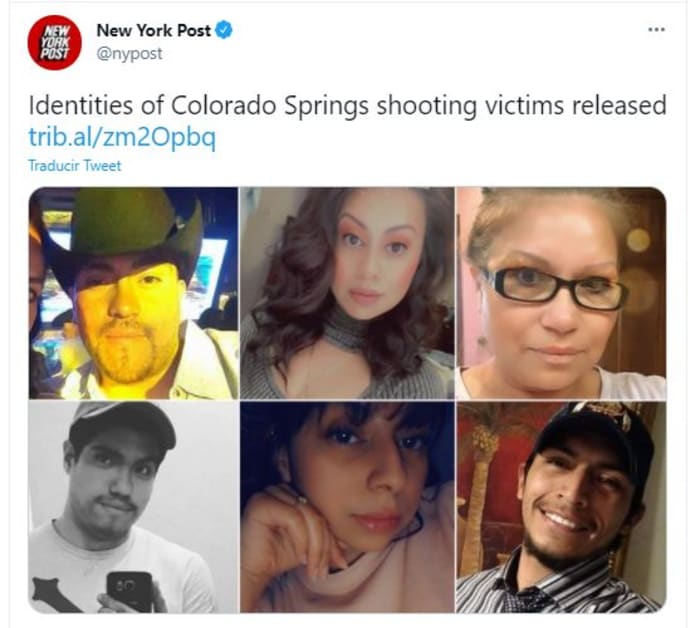 PHOTO Twitter The shooting at the Orlando USCIS office is not the only recent crime in which the victims have turned out to be Hispanic. and is that the fatalities of the shooting that broke out at a birthday party in Colorado during Mother’s Day would be all Hispanic, according to reports released by various media.

However, these reports have not yet been made official. Yesterday Sunday, a man shot and killed six people, including his girlfriend, at a family birthday party in Colorado, before making the dramatic decision to shoot himself, the newspaper said. Daily Mail.

The gunman entered a birthday party shortly after midnight Sunday and opened fire on those present, killing six before committing suicide in that trailer park in Colorado Springs, the aforementioned outlet reported.

After the shooting, the police arrived and found six people dead plus a seventh who was seriously injured and died after being transferred to a hospital, the Daily Mail report said. “The children in the trailer were not injured by the suspect and now they are with relatives ”, commented the police

In addition, it was reported that Joana Cruz, 53, and her two children, Melvin Pérez, 30, and José Guttierez, 21, were among the victims. Melvin Pérez’s wife, identified as Mayra, 32, was also killed in the shooting.

The Hispanic woman was murdered along with her sister Sandra Ibarra and her brother José Ibarra. The site said Sandra Ibarra was the suspect’s girlfriend, the Daily Mail detailed. According to the Daily Mail, the local Denver Post quoted a neighbor named Yenifer Reyes.

One of the victims was the gunman’s girlfriend

The neighbor said that the sound of gunfire woke her up and then heard the sirens before observing how the police took the children out of the house to put them in a patrol car. “They were crying hysterically,” Yenifer Reyes told the Denver Post.

Police revealed few details about the victims, other than that one of them was the gunman’s girlfriend and another was the person who was celebrating a birthday. Freddie Márquez, 33, said that his mother-in-law Joana Cruz, 53, was one of the victims and that he was at that party, but left around 10:30 on Saturday night, an action that it was worth to stay alive.

He was saved by leaving the party shortly before the shooting

After midnight, she received a call from the son of one of the women at the party, who was crying on the phone. “Someone came in and shot everyone,” Freddie Márquez exclaimed to his interlocutor. Nubia Márquez told the newspaper The Gazette that, in addition to his mother, his brothers Melvin Pérez, who would have turned 31 this week, and José Guttierez, 21, died.

The birthday party was held by Cruz and Pérez. Freddy and Nubia described the gunman as Sandra Ibarra’s boyfriend. They both told The Gazette that Sandra’s boyfriend, known only to them by the name Junior, always carried a gun and was known for being “quiet” and “serious.”

The gunman was “calm” and “serious”

When asked to describe the scene before leaving the party, Nubia told the aforementioned newspaper that “everyone was calm.” And he added: “My mother had always liked to celebrate them together”, about the fateful party.

Freddy also said that “everyone was fine” when they left the party around 10:00 pm. In addition, both described Cruz as a “loving” and “hardworking” woman, who “always laughed.” The shooting shocked the entire neighborhood.

Everyone was “quiet” before the shooting at a party in Colorado

Officers arrived at a trailer park shortly after midnight and found six dead adults and a seriously injured man who later died at a hospital. “The suspect, who is the boyfriend of one of the female victims, drove to the residence, entered and began shooting people at the party before taking his own life,” said a statement issued by the Colorado Springs Police Department. , according to the Daily Mail.

The motive for the massacre that occurred at a trailer park about 70 miles south of Denver has yet to be determined. On Sunday, police had not identified the shooter or the victims, but said the children at the party had been sent with relatives.