The police union gives “100% reason” to the officer who killed Adam Toledo, after the images of the persecution and murder of the 13-year-old Hispanic youth in Chicago, Illinois were disseminated.

Just yesterday Chicago police showed the public for the first time the images from the body camera of Officer Stillman, who shot Adam Toledo and fatally wounded him. Hours later, the city’s police union came to the defense of the official.

In an interview in Cuomo Prime TimeJohn Catanzara, president of the Chicago Police Union, assured that the shooting of the agent Eric Stillman against the minor was “100 percent justified.”

Catanzara stressed that the officer “was 100 percent right” and added that “the criminal (as he called Adam Toledo) still turned around with a gun in his hand. This happened in eight tenths of a second ”.

They claim that their actions were “really heroic”

The president of the union justified the facts by explaining that “the time-lapse video shows that that officer had eight tenths of a second to determine whether that weapon was still in his hand or not. Point”.

According to the statement, the officer had very little time to ‘confirm’ the versions that the boy had a hidden pistol that night of March 29 and ended by commenting that “the officer’s actions were truly heroic.”

According to Catanzara, “the criminal turned with a gun in his hand. This happened in eight tenths of a second ”. So “there is no way a rational person can say they can process that and their muscle reaction would be less than a second. The officer does not have to wait to be shot or shot to respond and defend himself. There is no obligation at all, ”he commented.

The confrontation occurred on the night of March 29 in La Villita, a Hispanic neighborhood in Chicago. In the video the officer can be heard yelling “Drop her! Drop it! ”, Referring to the alleged weapon Toledo was carrying. The young man turned, raising his hands and a fraction of a second later, the policeman fired.

“He did not shoot a second time”

To continue the explanation, the union president commented: “An average human being cannot stop someone from slapping him in the face in less time… It is a good reason why the officer only fired once. It would have been justified to shoot multiple times ”.

“We are basically trying to shoot and reevaluate. That didn’t even happen because when he fired for the first time in justification, he realized that the gun was not in his hand, he didn’t fire a second time, “he told journalist Chris Cuomo. 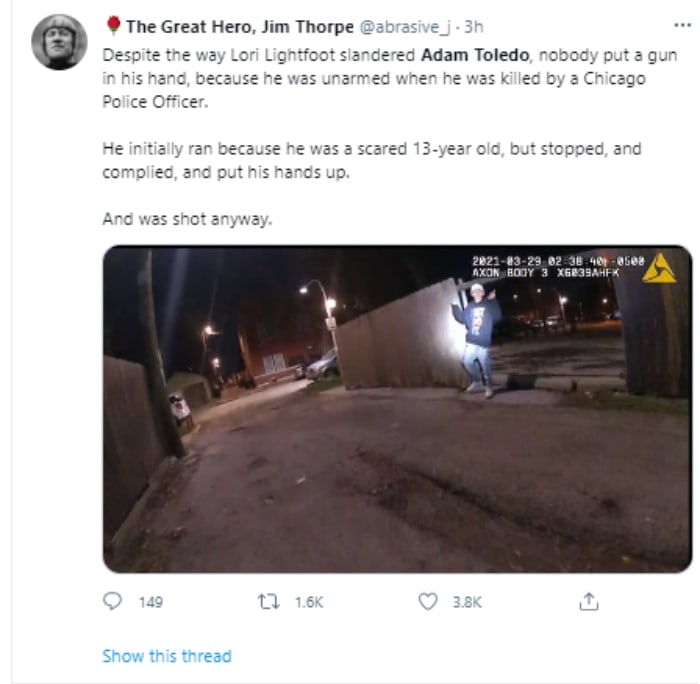 PHOTO Twitter The body video of the Chicago police officer showing the moment he shoots Adam Toledo has enraged and shocked the country, as the Hispanic boy died ‘with his hands up’ and without being armed.

The unfortunate event lasted a fraction of a second, and according to Chicago Mayor Lori Lightfoot, “it was an incredibly painful tragedy”, which is sure to provoke an emotional response for all who see it, so she asked residents to express themselves peacefully. .

Hispanic Adam Toledo was not armed when he was shot

The violent events occurred in an alley in the Mexican neighborhood of La Villita. Police had said that they found a weapon at the scene, and that it was the one allegedly held by the minor, however the video shows otherwise.

The video shows him throwing a gun before he was shot. On the contrary, when he raised his hands, he did not appear to have a weapon. The officer’s body camera shows him chasing Toledo down an alley in La Villita at around 2:38 am on March 29, Efe said.

Adam Toledo stopped, and in a split second he was downed

The officer yells “Police stop,” and then orders him to show his hands. In the video, the young Hispanic man, Adam Toledo, is seen standing next to a wooden fence, and with what appears to be a weapon on his back, the reactions of ‘repudiation’ towards the police action were immediate.

In less than 0.85 seconds from that moment, the officer shoots the minor, whose hands are raised almost to the shoulders, in a sign of ‘surrender’ and showing that he was not armed. He collapses to the ground and another officer immediately calls an ambulance.

The video is unlikely to clarify the doubts of activists and the community, who consider the police reaction unjustified. The Cook County Prosecutor’s Office has not mentioned whether any charges will be brought against the officer who fired the shot.

“That is why we ask that people speak out peacefully,” added Mayor Lori Lightfoot in anticipation of possible protests. In a joint statement with attorneys for the Mayor’s Office and the Toledo family, he said that the release of the video is “the first step in the process toward healing the family, the community and our city.”