Even in the best week of incidents of the year and the best in income since August, the Ministry has added 2,041 deaths to their accumulated total since the start of the pandemic, for a total of 69,142 in approximately one year.

If we go to the data of the autonomous communities themselves, the last consolidated week -the one from February 15 to 21- gives us an almost identical number: 2,042 deaths reported.

We have been since October 12 exceeding 1,000 deaths per week And although it is likely that in March we will see some weeks below this number, the truth is that there are already many more deaths registered outside the great tsunami of March-April 2020 than during those atrocious days.

This has a lot to do with it, of course, the fact that even today we do not know exactly how many people died during the first days of confinementWhen there were no deaths that had not tested positive in a PCR test … despite the fact that neither residences nor homes nor a large part of the hospitals in certain communities had enough tests for the entire avalanche that came upon them.

Between Madrid, Catalonia and Castilla y León there may have been some 20,000 more deaths from Covid than are still recorded by the official figures of the Ministry of Health, which would bring us closer to those 100,000 more deaths that the INE gives us for this period.

Although, unfortunately, we still have a few days left over the 150-200 deaths reported every 24 hours, it is not a bad time to take stock of how terrible this third wave has been that we seem to be leaving behind.

Although some regions have already seen considerable increases in infections since the beginning of December, we are going to set the start date of this third wave at the Christmas holidays. Let’s say December 22, last day of course in schools and universities across the country. Since that day, the communities have notified the ministry a total of 1,358,630 positives and 19,622 deaths, as of Friday, February 26.

Deaths from Covid-19 in Spain.


The figures in themselves are terrible, especially if we take into account that they cannot be considered closed. When comparing with the first wave, there are several issues that make the task difficult. From the outset, we would have to set an end date for said first wave and, apart from that, we have no choice but to take most of the data with tweezers: not enough tests were done then to compare the cases of then with those of now – Even during the second wave, relatively mild in our country, it was detected more and better than in the first one – we do not know with certainty the exact number of deaths … although if we remove the anomalies of Madrid, Catalonia and Castilla y León, the rest we can give them more or less for good, with the occasional exception of residences in Castilla La Mancha and Galicia.

The first problem can only be given a completely subjective solution. For the comparison of this article, we are going to date the end of the first wave on the same day the de-escalation startedThat is, when the majority of the country entered the so-called “Phase 0” of the “new normal”: on May 4, 2020.

From the first cases until said Monday, 216,582 positives had been registered in Spain – a joke compared to reality – and 25,100 “official” deaths. That same May 4, 276 deaths were still registered in Spain, similar figure to the 329 that were added to the accumulated last Friday.

If we go community by community, and we stick to the Ministry’s data, which we know are late in the date but not so late in the notification -bureaucracy issues- we find that the most affected in this third wave they have been Valencian Community (3,899 deaths reported), Andalusia (3.454), Madrid (2,162), Catalonia (2,033), Castilla La Mancha (1,546) and Castilla y León (1,328).

Between the least, We found Cantabria (145), The Rioja (146), Navarra (147) and Canarias (195). Now, the raw numbers tell us little: there are more deaths in communities with a higher population and fewer in those with fewer inhabitants. How does this compare to what happened just a year ago?

The great losers of this third wave have undoubtedly been Valencian Community and Andalusia, in that order. As of May 4, 2020, our cut-off date for the first wave, these two communities had 1,258 and 1,253 reported deaths, respectively.

In other words, this third wave has practically left three times more deaths than then and we are not aware that there were accounting problems at the time explain this difference. Worse still is the percentage -although not the volume- of Murcia: 132 deaths in the first wave … and 738 in the third, almost six times more. There have also been more deaths in Asturias (279 and 448), the Balearic Islands (197 and 260), the Canary Islands (140 and 195), Extremadura (458 and 669), Galicia (557 and 861) and the two autonomous cities: in the first Wave, Ceuta and Melilla registered a total of six deaths for the 50 of this third.

On the “positive” side, though Catalonia and Madrid present very high total figures, they have nothing to do with what happened last spring: From a combined total of 13,429 deaths (“official” figure that was probably more than double in reality) we have gone to 4,195.

The figures are also clearly lower in Castilla La Mancha, the community with the most deaths per inhabitant in the first wave, as well as in Castilla y León, Navarra and the Basque Country. In other words, although the incidence per community has not varied much – it has been exaggeratedly high in practically all – there is a great difference in mortality: those sites that suffered a lot in the first wave have suffered less in the third and vice versa. 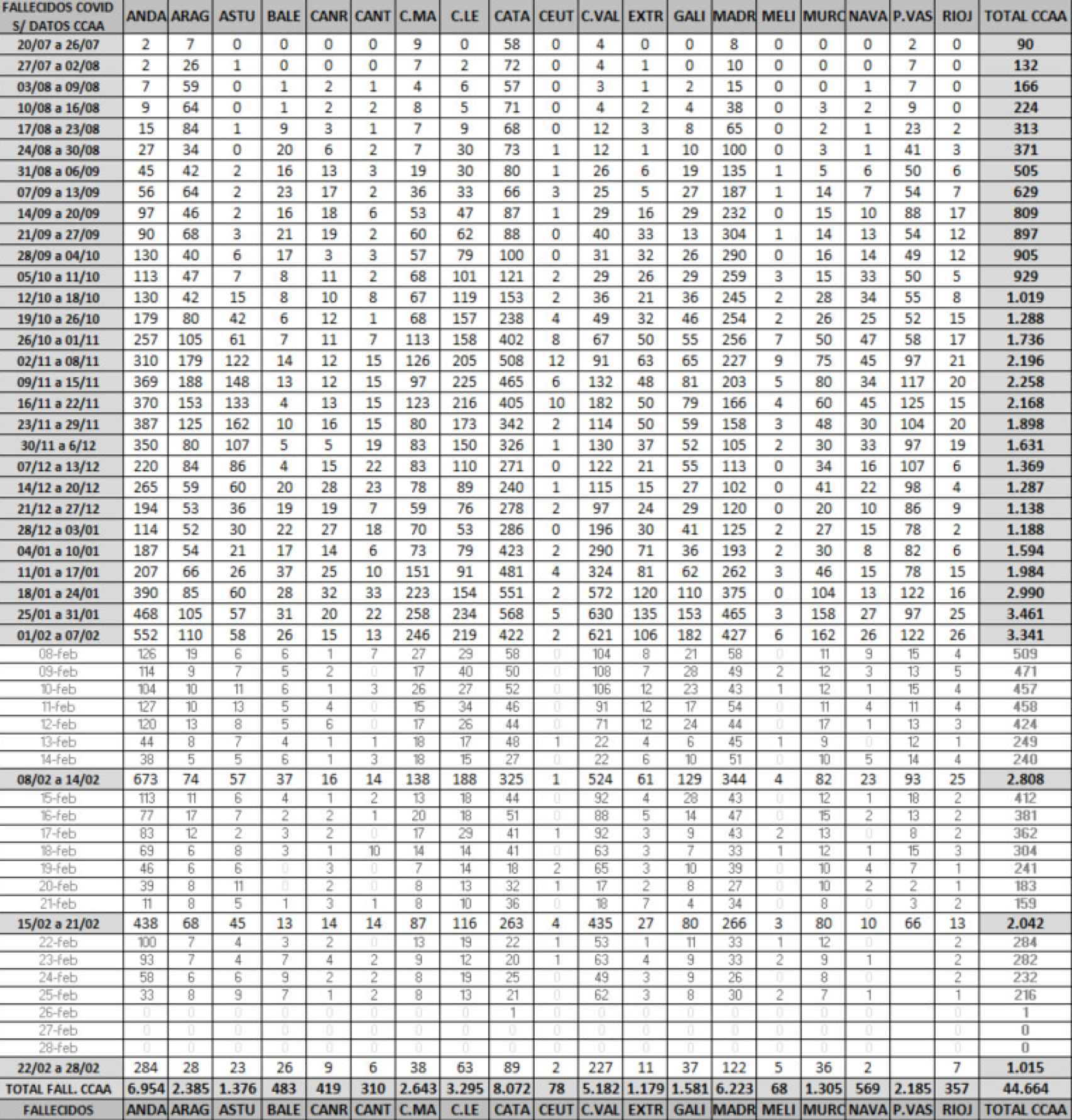 
Do these data vary a lot if instead of taking the figures of the Ministry we take those of the autonomous communities? According to the daily monitoring that the Twitter user does @homosensatus , we find that in this same period of the third wave the community with the most reported deaths is still the Valencian Community, with figures practically identical to those of the Ministry (3,916 deaths).

However, the second place here would be Catalonia, with 3,686 deaths, that is, there would be 1,653 deaths notified by the Generalitat that have not yet entered the ministry’s registry. We do not know if they will do it in the next few days or they will be in limbo like last spring.

Next, Andalusia (3,550) and Madrid (2,699) would arrive, which has also reported 537 deaths more than those registered by the Ministry. The two Castiles have reported 2,616 deaths between them, a a little less than what Health marks for that period.

For the purpose of this article, these differences do not affect much, beyond confirm the double accounting Generalitat-Ministry that has been dragging on since the beginning of this crisis.

They still are ten autonomous communities or cities that have seen this third wave run over them with more virulence than the first without taking such restrictive measures as then.

The problem, I insist, is that 200-250 deaths are still reported daily by the autonomous communities, even more by the Ministry due to pending accumulations. It is possible that by the end of March it will turn out that winter 2020-21 has been as deadly as spring 2020. This, always, according to official data. The real ones, I am afraid, will cost much more to know and it will be necessary to scrutinize the MoMos and the INEs to get closer to the truth.