Like nothing. With total impunity, Mayo Zambada hitmen are seen loading gasoline into their monster truck, which is distinguished by its handmade armor and by having high-caliber weapons.

It was on the account of Twitter La Voz del Pueblo that a video was shared that leads to confusion, since hitmen are seen wearing apocryphal uniforms of the Ministry of National Defense on their monster truck.

“They are not elements of the Sedena, they are assassins of the Mayo Zambada of the Sinaloa Cartel at the gas station located at the junction from Guamuchil to Angostura”, you can read in this publication that to date has more than 3,000 views.

In just a few seconds, a fragment of the song Comandante en Jefe of the musical group Los Tucanes de Tijuana can be clearly distinguished: “Los Comanches y los Verdes, Peñas ántrax y azunosos, is an intelligent man
the mobster of gangsters ”.

But that would not be all in this video, since you can also see a truck in white, so it follows that the monster truck is escorting it and stopped only to fill up with gasoline (TO SEE THE VIDEO CLICK HERE).

The Mayo Zambada hitmen are not the only ones on display

In this same Twitter account, an image is shown that reflects the total impunity that prevails in various areas of Mexico, in this case, in Camargo, Tamaulipas, where hitmen from the Gulf Cartel stop to load gasoline into their monster truck. 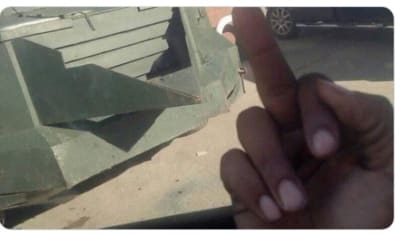 It is said that close to the members of this armed group were several policemen who decided not to act.

The violence in Mexico does not stop. Hitmen set fire to 2 trucks in the area that Caro Quintero and Los Chapitos are fighting for. No injuries were reported, although there is one person missing.

Through the Twitter account of journalist Sergio Valles Padrés, a video of just a few seconds long is shared in which the damage that hitmen caused by setting fire to 2 trucks is seen.

“At this time, corporations from the three orders of government are deploying an operation in the Guaymas-Empalme Valley to locate an armed group that set fire to two trucks carrying agricultural laborers this Tuesday afternoon. They do not report injuries ”, you can read in this publication. 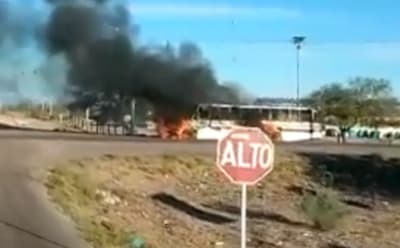 According to information from La Opinion, this violent event occurred in the municipalities of Valle de Guaymas and Empalme, in Sonora, an area that is disputed by Caro Quintero (Caborca ​​Cartel) and Los Chapitos. Immediately, Code Red was activated.

Filed Under: The monster truck of the May Zambada hitmen

Battle for control of this plaza

The Coordination Table for Peace and Security of the State of Sonora deployed a coordinated search for those responsible for the violence that affected the users of the two trucks, which were left unusable.

Although it was assured that one of the drivers was deprived of his liberty, there has not been an official pronouncement from the local government so far. 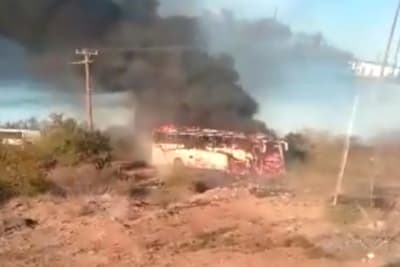 According to reports, hitmen from the Sinaloa Cartel, in this case Los Chapitos, have a bloody battle for control of this plaza with La Barredora 24/7, which is related to the Caborca ​​Cartel, which is directed by Caro Quintero. To see the video click here.

Filed Under: The monster truck of the May Zambada hitmen