The most famous clairvoyant in Mexico, Mhoni Vidente, like every week on social networks, comes out to give her predictions and on this occasion she mentions what will happen to Chapo Guzmán’s wife, Emma Coronel.

On his channel YouTube, the psychic appeared in the program Here With You of the Heraldo de México, to talk about her fulfilled predictions, and other things that are coming in the coming months.

At the beginning of the clip, Mhoni talks about the predictions that have come true, such as the 7.1 earthquake in Japan, as well as the death of the president of Argentina, Carlos Menem and about the winter storm that hit the United States.

He even mentioned what will happen to Emma Coronel, who is in custody for alleged drug trafficking, and is awaiting her conviction from the judge.

“THE COVENANT IS BROKEN”

“The pact was broken, which Donald Trump, the president of Mexico and El Chapo had, so now that the new president enters, they arrest Emma Coronel, and they had to invent some crimes for her,” said Vidente. 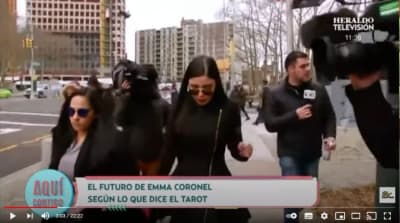 The clairvoyant also affirmed that she sees Chapo’s wife coming out of jail in about three or four years, but “right now they are doing a pig’s hand to Chapo, because when they arrest his wife, they want to get more information from him.”

He also said that dangerous things are coming for Mexico, in matters of the mafia, “because that pact that existed between the two rulers with Chapo Guzmán, disappeared, and more arrests are visualized.” TO SEE THE VIDEO CLICK HERE

Mhoni Vidente took out the letter from the hanged man and affirms that it will be four years of dispute against drug trafficking in the United States, Mexico and Latin America. 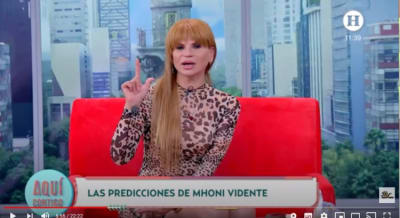 “I see some dispute between the US president and the Mexican president on issues of not reaching an agreement, you have to get along with your neighbor, and what is going to happen is that they have to dialogue,” said Mhoni .

He predicted an approaching drought, a sun like never seen before, almost 40 or 50 degrees, for this reason it clarifies that the entire north of the country is hot.

The clairvoyant also spoke about a hurricane, “a hurricane with the letter E is visualized, almost in the middle of August, category almost 7, in the Atlantic, it exceeds the limits, the world is changing.”

Plus airplane crashes in Mexico

The psychic took out the letter of the trial, where she said about the fall of the plane where 6 soldiers died in the state of Veracruz, about another aircraft that collapsed in the United States and one more in Asia. 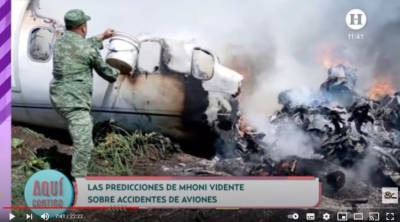 “The negative energies are so strong that they are rising to the sky, that’s why the birds sometimes lose their coordination and crash into the windows and that’s what is happening.”

Mhoni also envisioned another plane crash in Mexico City in May or June, where there will be politicians and businessmen and which will unfortunately have serious consequences for the US and Mexico.