Former White House strategist Steve Bannon thought Donald Trump was suffering from mild dementia and ran a covert campaign to remove him, according to the news outlet. The Guardian. Y The nation.

According to Ira Rosen, a television producer who published a memoir about his work for CBS, the former official, in a covert way, would have tried to remove him from the government through the 25th amendment.

Rosen said of Bannon: “Steve is a great talker, a great gossip. It became a source for many media in Washington. “

There were some rumors that Trump might have Alzheimer’s at the time, so Rosen added: “Bannon kept saying this, and he wanted to do something about it. Now, the secret was that Bannon thought madly that he could be president. “

In his text, Rosen notes that Bannon “believed that Trump was suffering from mild dementia and that there was a real possibility that he would be removed from office by the 25th Amendment, by which the cabinet could vote that the president was no longer mentally capable of carry out their duties ”.

Bannon helped Donald Trump achieve a victory in the elections and constituted a change in the current president’s agenda.

He had so much influence in the White House that he was known as “Trump’s Rasputin”, yet he was also considered a source for many media outlets.

As it will be remembered, at the end of January this year, the then US president, Donald Trump, pardoned hours before leaving power, his important strategist and far-right, Steven Bannon, accused of defrauding donors to the construction of the controversial border wall, the White House confirmed in a statement.

Trump granted a total of 73 pardons and commuted their respective sentences to another 70 people, a measure that is in line with a long presidential tradition of promoting pardons at the last moment of his term, the EFE agency reported.

On the case of Donald Trump and his alleged insanity, Steve Bannon always had a negative feeling towards the then president.

According to Rosen, Bannon maintained a feeling of “frustration” towards Trump, since he considered that he was betrayed by him.

Despite his important role in those times, the relationship between Trump and Bannon broke down within months of his arrival at the White House when the strategist criticized the president’s children and was fired.

Trump even said of Steven Bannon, who had previously run the far-right and conspiratorial Breitbart News, that he had “lost his mind”, and that “when he was fired he cried and begged for his position.”

It should be remembered that in addition to Bannon, the pardons affected two well-known American rappers and politicians and businessmen who, at some point, have been part of Trump’s environment

Among those pardoned were Elliott Broidy, a former Trump campaign fundraiser who pleaded guilty to one count of conspiracy. 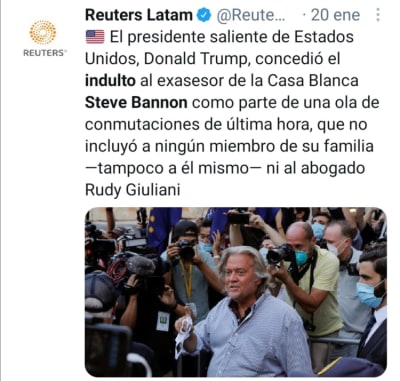 It has also benefited Robin Hayes, a North Carolina political donor convicted of attempting to bribe officials; the former mayor of Detroit; Kwame Kilpatrick, charged with federal charges including racketeering, extortion, and filing false tax returns; o William Walters, a professional gamer convicted of insider trading; and Aviem Sella, an Israeli air force officer whom the United States accused of being a spy.

Although neither Trump nor members of his family have been included in this list, the outgoing president still has a few hours to issue more waivers of sentences and pardons before leaving office.