The singer Chiquis Rivera appears on social networks from bed to send a message, just a few hours after the Lo Nuestro Awards ceremony begins, she shows the results of her training, showing her leg.

It should be remembered that the daughter of the deceased singer, Jenni Rivera, began to upload recordings where she can be seen training very hard to burn those extra kilos.

Now through your account Instagram, the musical artist appears lying on her bed, posing very sensually to show the results of her exercises, which she has achieved so far.

The singer has drawn some sighs in this publication, as she appears posing for the camera in a very sensual way wearing only a pink blouse to show her leg.

The singer sends a message

This was shared a few hours before the Lo Nuestro Awards ceremony begins, where Chiquis Rivera will be present, probably surprising with her clothing.

He also took the opportunity to send a message to his followers: “The calm before the storm… see you tonight. #PremioLoNuestro ”.

So far Chiquis’s photography has reached over 600 comments from his followers, who took the time to send their positive comments.

There were those who wished him the best of luck: “Let’s go with everything @chiquis best of luck God and all your boss bee nation we are with you “, said a netizen in the image shared by the singer.

Currently the image published by Chiquis Rivera where he appears from the bed to send his message, has obtained a great response from his followers, having so far more than 46,000 “like” reactions. 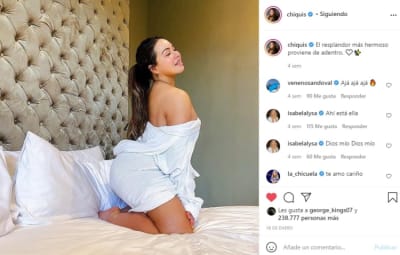 Some users mentioned that they miss seeing her at concerts: “Hey, my girl, I’ll see you later !! Even if it’s on TV I miss concerts a lot! ”.

There were those who liked the fitness body that the musical artist is taking after she started with her exercises, “Dios que cuerpower”.

Even some celebrities from social networks sent their messages in the comments of the publication, as is the case with Maria Elena Anaya, the Mexican influencer and the radio host La Bronca, commented on their heart and fire emojis respectively.

“Tonight tonight the prize is yours”, “You are going to break it”, “You are wearing a @masongrey dress “,” Have an incredible day today “,” I miss you with all my heart “,” Beautiful as always “,” My girl then make us a live “, were some of the comments made by Internet users.

Previously, Chiquis Rivera surprised on social networks by publishing a video in which he appeared moving his rear like jelly in tight leggings. 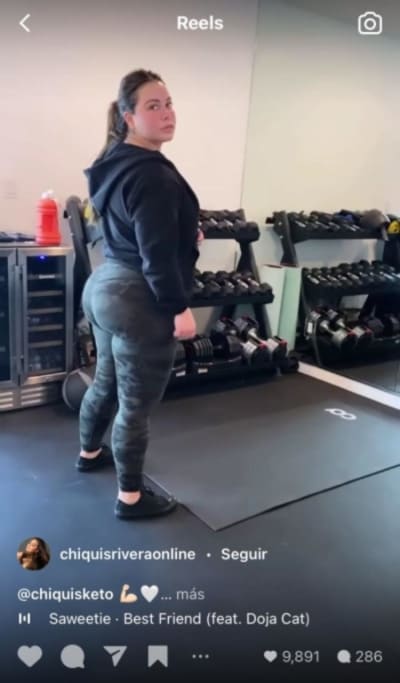 Go that Chiquis Rivera took exercise seriously to improve his life, and it is that, as many Internet users assure, the daughter of the band diva She started going to the gym again after a few photos of her in a bikini leaked.

Among the exercises that Chiquis Rivera performed, you could see how her rearguard moved from one side to the other, while she proudly wore it in the video, and smiled from time to time at the camera.