Lego Vidiyo is the coolest Lego set collection I have come across, but does the play experience live up to the soaring style?

Lego’s latest collection of games aims to help spark creativity in kids by allowing them to make their own music videos featuring songs from Universal Music and a surprisingly capable companion app.

Each game comes with a collection of tiles called ‘BeatBits’ that allow you to edit your music video with different effects. Then combine this with the new lego characters to make fun videos.

Lego says it is promoting Vidiyo for children who are approximately seven years old. While the musical premise and cool designs may appeal to those who are kids at heart, the actual playtime in the app is definitely something that younger kids will get the most value from.

Adults may not enjoy it as much.

So can you build something?

The answer to this question is yes and no. If you’re looking for the classic Lego building experience, this isn’t where you’ll find it, at least on the surface.

The Vidiyo collection includes two main offerings. There are larger base sets with 16 BeatBits and a character, plus a fun little carrying case with a Lego panel that you can customize. This carrying case is called the ‘BeatBox’, and customizing one side to use as the background in your video is the extension of the building process.

The smaller kits only come with a random bandmate and three BeatBits. All sets include a stage that comes into play later. 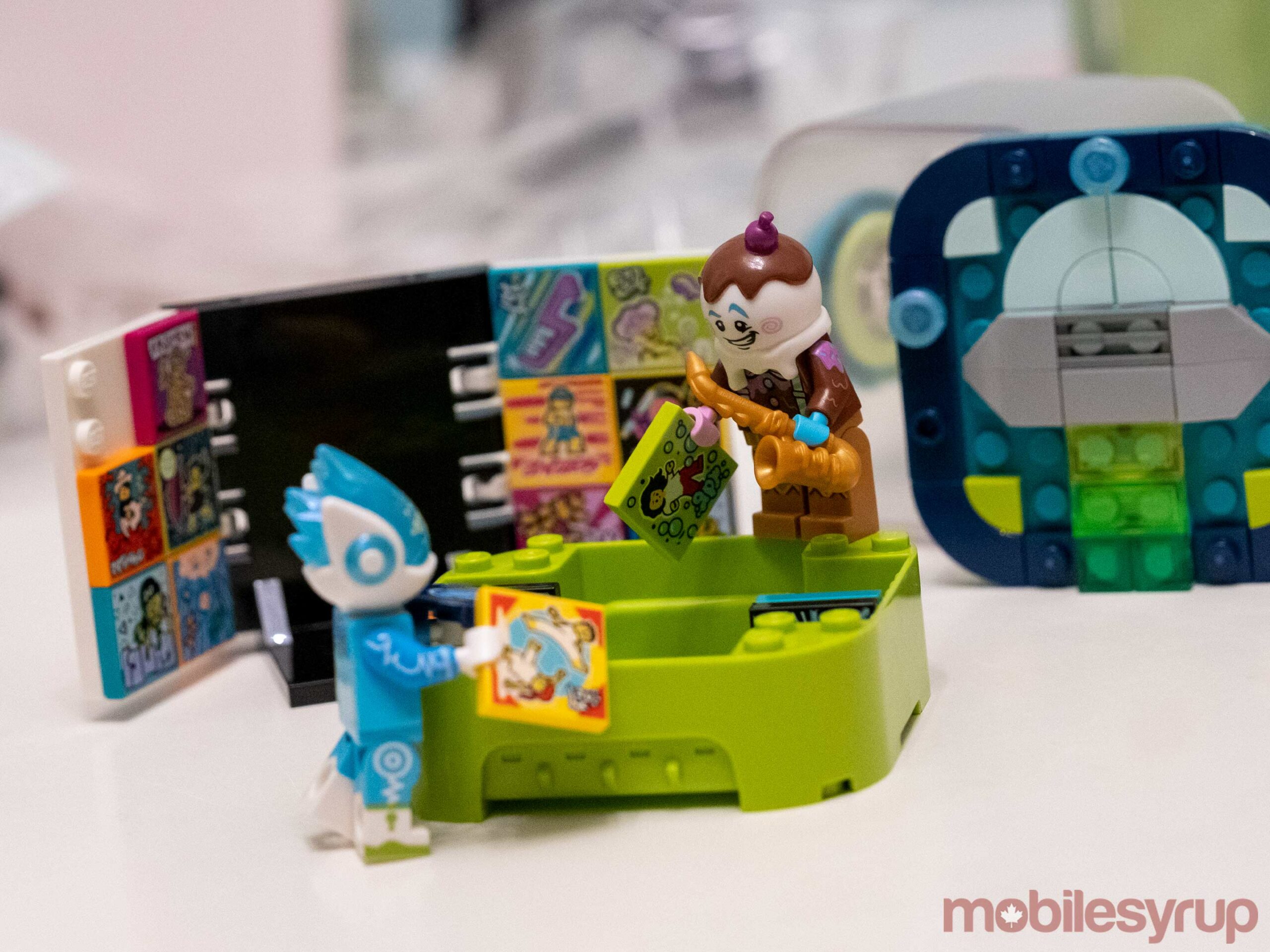 To be clear, this is not really a bad thing, as there is still a lot of playtime in the app.

On an aesthetic level, all BeatBoxes look incredible. The same goes for the attached minifigures. They feature fun, attractive colors, and their musical props and backstories are great.

How do we make a video? 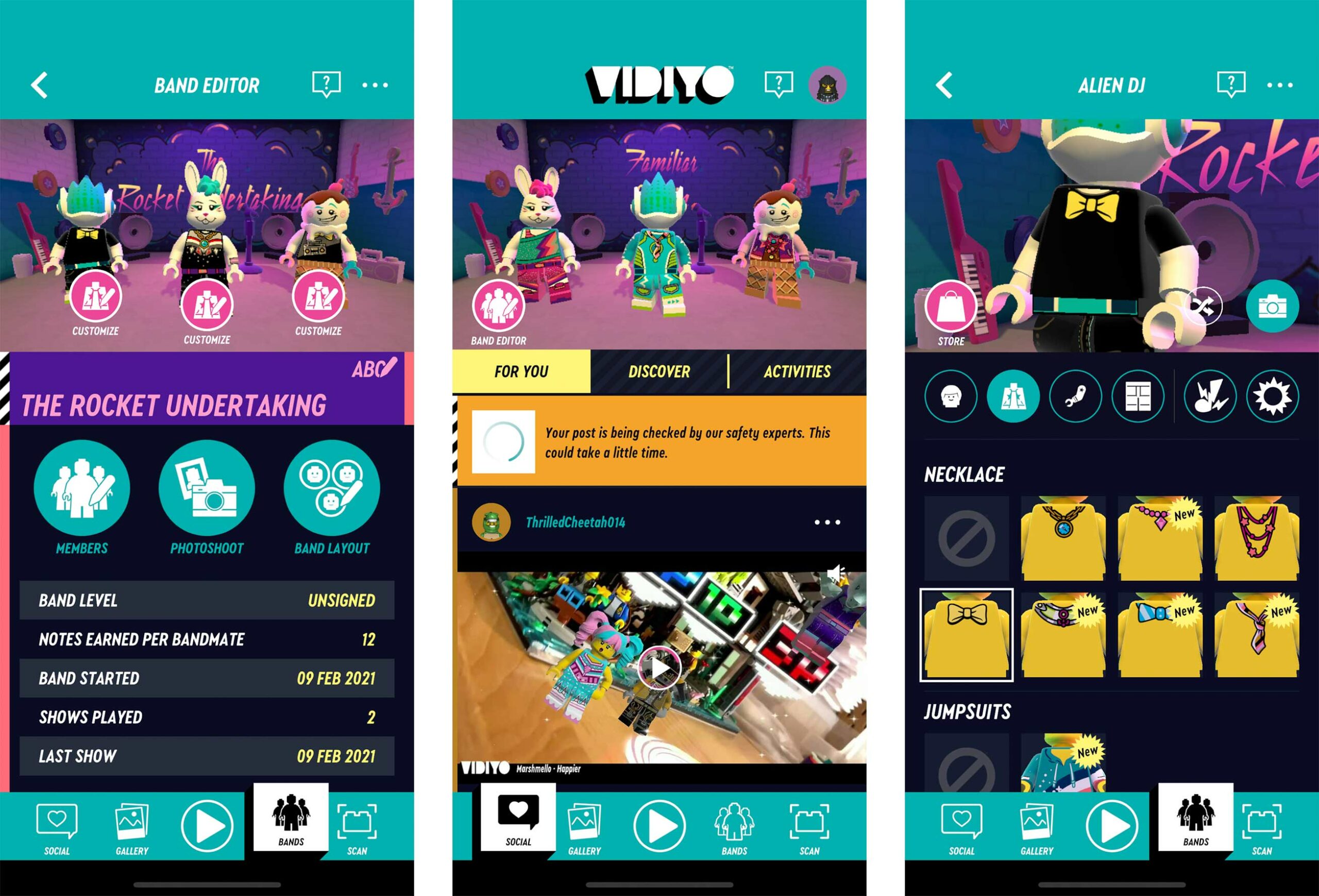 Once you are done getting familiar with the characters and BeatBits, you can download the Vidiyo app. It’s free on both iOS and Android, and parents can take comfort in learning that Lego has locked it down to ensure kids can’t share videos of themselves or their faces.

You can use the app without purchasing any of the Lego Vidiyo sets, but you are limited to using six random BeatBits and one random character. When you upload your own characters, you can customize them and have three gang members. You can also use 12 BeatBits.

BeatBits are the bulk of the experience, allowing you to queue up what’s going on and how your band members act during filming.

For example, the Yellow Bits apply dance moves to their band. So if you add some of those to your video, you can make your band dance at select times during the video.

To choose which BeatBits you use during your video, you need to apply them to your stage piece and then scan them before starting the video. You must do this before each video.

Once you’re filming, you can tap the BeatBits on the side of the screen to apply your chosen effects. There are no actual editing features, but if you pause the video while you’re shooting, you can reposition it mid-shot.

In terms of music, there are 22 songs in the app right now and more to come, Lego says. These range from older classics like MC Hammer’s ‘U Can’t Touch This’ to long-awaited hits like ‘Me!’ by Taylor Swift and The Weeknd’s ‘Blinding Lights’, so there’s likely something for everyone within the limited selection.

When you’re done with your video, you can share it on the Vidiyo app or export a clip to share with friends and family.

Simple enough for a child, too simple for me

I wish I was seven again every time I play with this app and the sets that come with it. I know I would have spent hours trying to make videos in the app and watching the excellently crafted BeatBits.

Even the simple hook of the more you play with it, the more it rewards you with an in-app coin that you can spend on new outfits and stuff for your bands, it’s compelling. Parents will also be happy to know that there are no in-app purchases.

The app itself isn’t the easiest platform I’ve ever used, but I think kids will be able to understand it well enough.